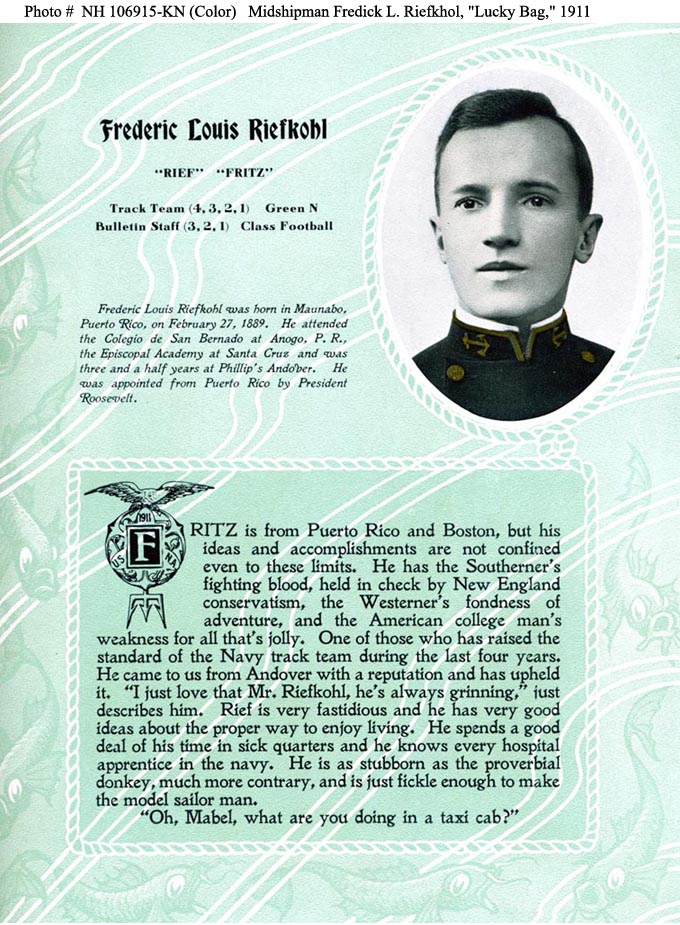 Frederic Louis Riefkohl was born in Maunabo, Puerto Rico, on February 27, 1889. He attended the Colegio de San Bernado at Anogo, P.R., the Episcopal Academy at Santa Cruz, and was three and a half years at Phillips Andover. He was appointed from Puerto Rico by President Roosevelt.

Fritz is from Puerto Rico and Boston, but his ideas and accomplishments are not confined even to these limits. He has the Southerner's fighting blood, held in check by New England conservatism, the Westerner's fondness of adventure, and the American college man's weakness for all that's jolly. One of those who has raised the standard of the navy track team during the last four years. He came to us from Andover with a reputation and has upheld it. "I just love that Mr. Riefkohl, he's always grinning," just describes him. Rief is very fastidious and he has very good ideas about the proper way to enjoy living. He spends a good deal of his time in sick quarters and he knows every hospital apprentice in the navy. He is stubborn as the proverbial donkey, much more contrary, and is just fickle enough to make the model sailor man.
"Oh Mabel, what are you doing in a taxi cab?"

Frederick Louis Riefkohl was born in Maunabo, Puerto Rico, on 27 February 1889, son of Luis Riefkohl y Sandoz and Julia Jamieson Riefkohl. He attended schools in Arroyo, Puerto Rico; Christainsted, St. Croix, Virgin Islands; and Concord, Massachusetts; and had a year at Phillips-Andover Academy before entering the US Naval Academy, Annapolis, Maryland, on appointment from Puerto Rico, on 5 July 1907, the first Midshipman appointed from Puerto Rico. As a Midshipman he was a member of the Track Team and played Class football. He graduated on 2 June 1911, and as Passed Midshipman served at sea for a year , as required by law (changed in 1912), prior to becoming commissioned on 2 March 1912. Through subsequent promotions he attained the rank of Captain, to date from 4 June 1939. He was transferred to the Retired List of the Navy on 1 January 1947, and advanced to the rank of Rear Admiral on the basis of combat citations.

After graduation from the Naval Academy in 1911, he served successively in the USS Maine, USS Florida, USS Terry, USS Roe, USS Hannibal (on survey duty, one year), USS Mayrant, USS Benham, and USS Wyoming. In May 1917 he reported to the Receiving Ship, New York, and was in command of the Armed Guard of the USS Philadelphia until 18 February 1918, during the first year of World War I. He was awarded the Navy Cross and cited as follows:

"For distinguished service in the line of his profession as Commander of the Armed Guard of the USS Philadelphia, and in an engagement with an enemy submarine. On August 2nd, 1917, a periscope was sighted, and then a torpedo, which passed under the stern of the ship. A shot was fired, which struck close to the submarine, which then disappeared."

He was then ordered to duty as District Communication Officer, Fifteenth Naval District, Balboa, Canal Zone. There he had additional duty as Cable Censor until he was detached with orders to the Receiving Ship, Boston, Massachusetts, in February 1920. In April of that year he became Squadron Radio Officer for Destroyer Squadron 3, Atlantic Fleet. From February 1921 until June 1922 he served as Aide and Force Radio Officer on the Staff of Commander Destroyer Force, Atlantic Fleet. He was assigned duty as Executive Officer of the USS Preble enroute to Asiatic Station. He was Aide and Flag Secretary and Fleet Radio and Communication Officer to Commander in Chief, Asiatic Fleet, from August 1922 until October 1923.

Assuming command of the USS Smith Thompson, he commanded that destroyer until June 1924, when he was ordered to the United States reporting to the Receiving Ship, Seattle, Washington. He served briefly as Officer in Charge of the Navy Recruiting Station, Des Moines, Iowa, with additional duty in connection with instruction and inspection of Naval Reserves, and in September 1924 reported to the Navy Yard, Brooklyn, New York, for a tour of shore duty as Radio Material Officer.

In July 1926 he assumed command of the USS Corry, and when detached from that destroyer in August 1928, was ordered to the Navy Department, Washington, D.C. From there he was sent to Port au Prince, Haiti; Guantanamo Bay, Cuba; San Juan, Puerto Rico; and St. Thomas, Virgin Islands. He returned to the Navy Yard, Brooklyn, New York later that year, and served as Executive Officer of the USS Kittery, naval transport, until June 1929.

He next had duty as Aide and Chief of Staff to the governor of the Virgin Islands, Captain Waldo Evans, USN, and when the administration of the Islands was transferred from the Navy to the Department of the Interior, with a civil governor on 30 April 1931, he became Commandant of the Naval Station, which he decommissioned in June of that year. For the next six months he served as Gunnery Officer of the USS New Mexico, and from January 1932 until June 1933 had successive duty as Navigator of the USS Omaha, light cruiser, and the USS Lexington, aircraft carrier.

A student (senior class) at the Naval War College for a year, he then was placed in charge of the Navy Motion Picture Exchange, Navy Yard, New York. During that six months' assignment he had additional duty in connection with inspection of merchant ships as outlined by the Department of Commerce. From January 1935 to December 1936 he served as an advisor to the Argentine Navy Department at Buenos Aires, Argentina, and when that service was completed he had duty afloat from March 1937 until July 1939 as Executive Officer of the USS Nevada, battleship.

Reporting for duty as War Plans Officer on the staff of the Commandant Fifteenth Naval District, Balboa, Canal Zone, he remained there from 19 July 1939 until 4 April 1941. During that period he conferred with Ministers of Defense of Costa Rica, Colombia and Ecuador on Hemispherical Defense. He then returned to the United States to assume command of the USS Vincennes on 23 April 1924. He remained in command of that cruiser until she sunk in the Battle of Savo Island on 9 August 1942, during the first year of World War II. The following month he returned to the Navy Department, Washington, D.C., and after brief duty in the Bureau of Naval Personnel, was sent to Mexico.

In October 1942 he reported to the Office of the US Attache, American Embassy, Mexico City, Mexico, and joined the staff of the Commander, Mexican Forces, Region Gulf of Mexico, at Vera Cruz, as Liaison Officer for US Commander, Gulf Sea Frontier. From January to October 1944 he served as Assistant Commander, Gulf Sea Frontier, Miami, Florida, and in November of that year became District Intelligence Officer, Eighth Naval District, with headquarters at New Orleans, Louisiana. On 27 February 1945, he reported for duty with US Naval Forces in Europe and continued in that assignment throughout the remaining war period.

On 12 February 1946 he reported as Deputy Chief of Staff to the Commandant, Tenth Naval District, and Commander Caribbean Sea Frontier, Headquarters at San Juan, Puerto Rico, and remained on duty there until his retirement became effective on 1 January 1947.