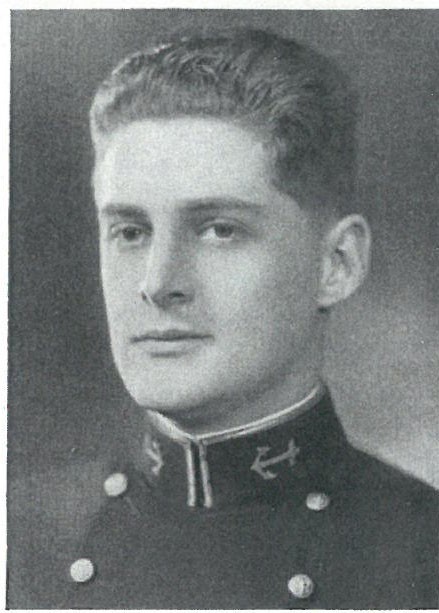 Clarence Mills Caldwell was born on October 14, 1910 in Atlanta, Georgia, son of Robert Hugh and Susie Hardman (Mills) Caldwell. He attended Boy’s High School in Atlanta, before his appointment to the US Naval Academy, Annapolis, Maryland, from the State of Oklahoma in 1929. As a Midshipman he was an Expert Rifleman, was a member of the class rifle and football teams, and participated in track and wrestling. Graduated and commissioned Ensign on June 1, 1933, he subsequently attained the rank of Commander to date from January 1, 1944.

After graduation from the Naval Academy in 1933, he joined USS California, and in April 1936 transferred to USS Bushnell. Detached from that submarine tender to March 1937, he had duty until March 1939 in USS Detroit, interspersed with instruction, between June and August 1938, at the Battle Force Torpedo School, San Diego, California. Following four month’s further sea service as First Lieutenant of USS Claxton, he reported in August 1939 for instruction in radio engineering at the Postgraduate School, Annapolis, Maryland.

He continued the course from August 1941 to May 1942, at Harvard University, Cambridge, Massachusetts, where he received the degree of Master of Science in communications engineering. Completing four month’s instruction in high frequency and radar techniques at the Special High Frequency and Rader School and at the Radiation Laboratory, Massachusetts Institute of technology, Cambridge, he reported in August 1942 as Electronics Officer on the staff of the Commander Service Force, US Pacific Fleet.

"For meritorious service in connection with operations against the enemy as Officer in charge of the Radio, Radar, and Sonar Section of the Fleet Maintenance Officer, Commander Service Force, US Pacific Fleet....." he was awarded the Bronze Star Medal. The citation continuous in part: ".....He displayed unusual resourcefulness in supervising and expanding the facilities for inspection, maintenance, and repair of ship-borne electronic equipment in the Fleet. His careful planning and intelligent administration of the material pools enabled a maximum number of units to be outfitted with the latest technical equipment, His sound advice and reliable counselor were relied upon by types of administrations and operating commanders in regards to all types of electronic equipment. Commander Caldwell’s high degree of professional skill and vast practical knowledge resulted in the development and full utilization of numerous recent advancements in the field of electronics....."

In July 1945 he was assigned to the Office of the Chief of Naval Operations, Navy Department, Washington, DC, as Officer in Charge of communications Equipment Section, Operational (Technical) Characteristic Branch, Electronics Division. He remained there until January 1947 when he had duty in the Design Branch, Electronics Division, serving first as Officer in Charge Loran Design Section, later, as Officer in Charge of Loran and Systems Engineering Design Section and finally, as group Head of the Systems Group. For a year (March 1948-March 1949), he was assigned as Electronics Officer, to the Severn River Naval Command, the Potomac River Naval Command, and the Naval Gun Factory, Washington, DC.

He became Deputy Director of Contracts in the Bureau of Ships, where he remained until August 1950. Completing instruction at the Industrial College of the Armed Forces, Norfolk, Virginia, he had temporary duty between June and August 1951 in the Bureau of Ships, and in the Office of the Chief of Naval Operations, successively. He is now under orders to report for duty in the Office of the US Naval Attaché, American Embassy, London, England.

In addition to the Bronze Star Medal, Commander Caldwell has the American Defense Service Medal; the American Campaign Medal; the Asiatic-Pacific Medal; and the World War II Victory Medal. He also has the Navy Expert Rifleman’s Medal.