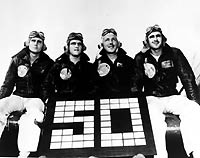 Eugene Anthony Valencia was born in San Francisco, California, on 13 April 1921, son of Eugene A. And Myrtle Eleanor (Loveing) Valencia. He attended Alameda, California, High School in 1935-1939, and San Francisco Junior College (SFJC) for two years, and at the latter participated in football and boxing; was President of Associated Students of SFJC and President of Associated Men Students of SFJC; and was a member of Phi Lambda Epsilon. On 1 August 1941, he was appointed Aviation Cadet, US Naval Reserve. He was commissioned Ensign in the Naval Reserve on 9 February 1942, transferred to the US Navy on 11 June 1947, and subsequently advanced in rank to that of Commander, USN to date from 1 July 1954.

Following flight training at the Naval Air Stations, Pensacola, Opa Locka and Jacksonville, Florida, during the period 8 August 1941 to 12 April 1942, he was designated Naval Aviator, and as an Ensign in the Naval Reserve reported to the Naval Reserve Aviation Base, Oakland, California, for duty as a Flight Instructor. On 26 December of that year, he joined Carrier Qualification Training Unit, San Diego, California, for refresher training, and on 3 February 1945 reported to Fighting Squadron NINE, based successively on the USS Essex, USS Lexington and USS Yorktown. For outstanding World War II service he was awarded the Navy Cross, the Distinguished Flying Cross, Gold Stars in lieu of the Second, Third, Fourth, Fifth, and Sixth Distinguished Flying Cross, and the Air Medal with five Gold Stars in lieu of additional awards. The citations follow in part:

Navy Cross: "For extraordinary heroism as Pilot of a Fighter Plane in Fighting Squadron NINE, attached to the USS Yorktown, in action against enemy Japanese forces at Okinawa, April 17, 1945. Leading his combat air patrol in an aggressive attack against an overwhelming force of enemy fighters intent on attacking our Fleet units, Lieutenant Commander (then Lieutenant) Valencia engaged the enemy and, although outnumbered ten to one, personally shot down six hostile planes, probably destroyed another and damaged one. By his expert airmanship, gallant fighting spirit and devotion to duty, he contributed materially to the ultimate destruction and dispersal of the enemy formation..."

Distinguished Flying Cross: "For heroism and extraordinary achievement in aerial flight as Pilot of a Fighter Plane, in action against enemy Japanese forces at Truk Atoll, Caroline Islands, February 16, 1944. When his division was attacked by swarms of hostile fighters as they were making a pre-dawn fighter sweep against the Japanese stronghold at Truk, (he) instantly turned to meet the challenge and, fighting his plane aggressively and with great skill, sent three Japanese planes crashing in flames. Subsequently participating in a daring attack on shipping later in the day, he made repeated strafing runs on an enemy destroyer in the face of intense antiaircraft barrages to start several fires and inflict considerable damage to this combatant ship..."

Gold Star in lieu of the Second Distinguished Flying Cross: "...as Pilot of a Fighter Plane in Fighting Squadron NINE, attached to the USS Essex, in action against enemy Japanese forces in the vicinity of Rabaul, New Britain and the Solomon Islands, on November 11, 1943. Assigned to escort the striking group in the attack against enemy shipping in Rabaul Harbor, (he) made three strafing runs on a heavy cruiser in the face of intense antiaircraft fire and assisted in covering torpedo planes retiring from the target, personally shooting down one enemy fighter. When enemy planes attacked his Task Force later in the day, he opened fire upon the hostile craft despite intense fire from our own ships to destroy one dive bomber and one torpedo plane and aid in the destruction of another torpedo plane..."

Gold Star in lieu of the Third Distinguished Flying Cross: "...as Pilot of a Fighter Plane in Fighting Squadron NINE, attached to the USS Lexington, in action against enemy Japanese forces in the Tokyo Area, Japan, on February 17, 1945. Leading his division in a fighter sweep over the Japanese homeland despite adverse weather conditions, (he) braved the enemy antiaircraft fire to strafe an important airfield and, when numerically superior hostile fighter planes attacked the flight on its way to a second target, shot down one of the enemy craft. Recovering quickly, he immediately shot down another enemy plane, thereby contributing materially to the success of the mission..."

Gold Star in lieu of the Fourth Distinguished Flying Cross: "...as Pilot and Division Leader in Fighting Squadron NINE, attached to the USS Yorktown, in action against enemy Japanese forces in the vicinity of Okinawa on May 4, 1945. Leading his division in defense of a friendly task force, (he) engaged and shot down three enemy aircraft and contributed to the destruction of another..."

Gold Star in lieu of the Fifth Distinguished Flying Cross: "in action against enemy Japanese forces in the vicinity of Okinawa on May 11, 1945. Participating in combat air patrol in defense of our Fleet units on station north of Okinawa, (he) intercepted a large group of attacking hostile aircraft, and maneuvering his division for a counter-attack, personally shot down three enemy fighters and contributed to the destruction of numerous others..."

Air Medal: "For meritorious achievement in aerial flight as a Pilot in an Air Attack Group, operating against enemy Japanese bases at Wake Island on October 5 and 6, 1943, and at Tarawa, Gilbert Islands, from November 18 to 25, 1943. Participating in the attacks on these important islands, (he) fought his plane boldly through intense and withering enemy antiaircraft fire to carry out repeated swift and aggressive strikes against important hostile bases, inflicting extensive damage on Japanese shore installations, grounded planes and small craft in the vicinity..."

Gold Star in lieu of the Second Air Medal: "...as Pilot of a Fighter Plane in action against enemy Japanese forces during the assault on Roi-Namur, Marshall Islands, on January 29, 1944. Undaunted by intense antiaircraft fire and repeated enemy fighter attacks, (he) shot down one enemy fighter in flames and destroyed at least three bombers on the ground..."

Gold Star in lieu of the Third Air Medal: "...in the Tokyo Area, Japan, February 16, 1945. Participating in a fighter sweep over the Japanese homeland, (he) reached the target area despite adverse weather and commenced a strafing and rocket attack on an important enemy airfield. When enemy fighters in superior numbers appeared out of the overcast to attack our planes, he shot down a hostile plane, thereby contributing materially to the success of the mission..."

Gold Star in lieu of the Fourth Air Medal: "...as Pilot of a Fighter Plane in Fighting Squadron NINE, attached successively to the USS Lexington and USS Yorktown, in action against enemy Japanese forces in the vicinity of Iwo Jima, Hansoi Shoto and Kyushu from February 10 to March 27, 1945..."

The Gold Stars in lieu of the Fifth and Sixth Air Medal were awarded for completing five missions each in the vicinity of the Japanese homeland and adjacent island chains during the period February 10 to April 16, 1945. He received the Gold Star in lieu of the Sixth Distinguished Flying Cross for completing twenty missions in the vicinity of Tokyo, Iwo Jima, Kyushu and the Ryukyus from February 10 to June 5, 1945. He is also entitled to the Ribbon and stars for the Presidential Unit Citations awarded the aircraft carriers Lexington, Yorktown, and Essex.

During July and August 1945 (the last two months of World War II), he had duty in the Office of Public Relations, Navy Department, Washington, DC, participating in radio programs and taking part in Grumman aircraft promotional activities in New York City, Bethpage, Long Island, New York and Chicago, Illinois. On September 21, 1945 he reported to the Naval Ordnance Test Station, Inyokern, California, where he served until June 1948 as Aviation Ordnance Officer, Project Pilot and Test Conductor. Assigned next to the Fleet Airborne Electronics Training Unit, Pacific, he was Anti-submarine Warfare Officer until June 1950. The eighteen months to follow were spent as Maintenance Officer and Instrument Training Officer at the Naval Air Station, Corpus Christi, Texas. From January 1952 to June 1953 he was a student at the University of California and the Postgraduate School, Monterey, California, completing the course in General Line at the latter. He joined Air Transport Squadron TWENTY-ONE in June 1953 and served as Senior Route and Navigation Check Pilot until January 1956. He next had a tour of duty as Operations Officer on the staff of Commander Naval Air Bases, Twelfth Naval District, at Headquarters Naval Air Station, Lemoore, California, where he was also Project Coordinator. In June 1958 he was transferred to the Naval Air Station, North Island, to be Operations Officer and Executive Officer for All Weather Fighter Squadron THREE. That squadron won the Air Force, Western Air Defense Force "A" award for 1959-1960.

In June 1960 he was detached for duty as Public Information Officer for the North American Air Defense Command with Headquarters at Ent Air Force Base, Colorado Springs, Colorado.