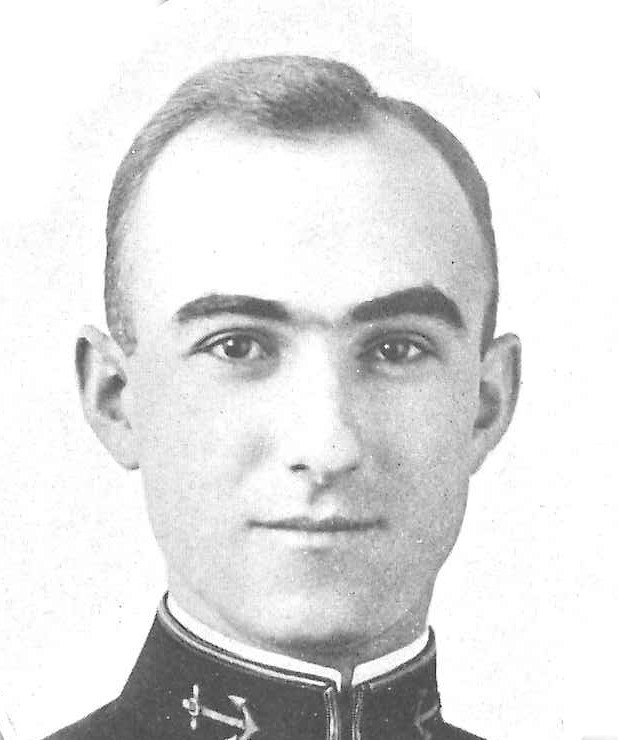 John Jennings Ballentine was born in Hillsboro, Ohio, on October 4, 1896, son of the late George McClellad and Ora (Eakins) Ballentine. He attended Hillsboro High School before his appointment to the US Naval Academy, Annapolis, Maryland, from the Sixth District of Ohio in June 1914. Graduated and commissioned Ensign on June 29, 1917, he subsequently progressed in rank, attaining that of Vice Admiral to date from November 1, 1949. On May 1, 1954 he was transferred to the Retired List of the US Navy, and was advanced to the rank of Admiral on the basis of combat awards.

After graduation from the Naval Academy in 1917, he had consecutive duty during World War I in the USS Nebraska; and at the Naval Auxiliary Reserve Officers School, Pelham Bay Park, New York; and from February 1919 served until May 1920 in the USS Arizona. He then reported for flight training at the Naval Air Station, Pensacola, Florida, a member of the fifth class trained at the station. Designated Naval Aviator (heavier than air), on November 22, 1920, he had additional training in land planes with the US Army Air Corps, Carlstrom Field, Arcadia, Florida, and in pursuit planes at Kelly Field, San Antonio, Texas.

In May 1921, he reported to Atlantic Fleet, Torpedo Plane Division, Yorktown, Virginia, for duty in the first torpedo plane squadron, in the Fleet. The title of this unit was changed to Torpedo Plane Squadron One, attached to the USS Sandpipper. In June 1922 he reported as Officer in Charge, Naval Air Detail Proving Ground, Dahlgren, Virginia, where he served until February 1926. During that period Carl Norden, a Navy consultant, designed his first bombsight in 1923, and the then Lieutenant Ballentine put it through its original tests at the Dahlgren Proving Ground, and later tested the first production model. He also controlled, from the ground, the first airplane operated under radio control.

He assumed command of Torpedo Squadron 20, attached to the USS Jason, Asiatic Fleet, in April 1926. In May 1927 he was assigned to the USS Marblehead of Light Cruiser Division Three, where he assumed command of Observation Squadron 11. While serving in the Asiatic, he made tow special trips to Tokyo, Japan, to make official inspection of Japanese naval aviation and aircraft manufacturing facilities. He was commented by the Naval Department for reports submitted after those inspections. He returned to the United States in August 1927, and had another tour of duty until June 1931 as Officer in Charge, Naval Air Detail, Dahlgren, Virginia. He received letters of commendation from the Navy Department for various aviation ordnance development during both tours of duty at the Naval Proving Ground.

He commanded Torpedo Squadron Two, based on the USS Saratoga, from July 1931 until June 1833, when he reported for duty in the Bureau of Aeronautics, Navy Department, Washington, DC There he served for two years as Head of the War Plans Section, and one year in the Plans Division, being detached in May 1936. He next had sea duty as Navigator of the USS Wright, flagship of Commander Aircraft, Base Force (title changed to Battle Force, September 28, 1937). In June 1937 he became Operations Officer on the staff, and in January 1938 transferred to the USS Saratoga for duty as Gunnery Officer on the Staff of Commander Aircraft, Battle Force, from January until June 1938, and as Operations Officer until May 1939.

He served in the Personnel Division of the Bureau of Aeronautics, Navy Department, Washington, DC, from June 1939 until May 1940, and as Head of Flight Division until June 1941. He went to sea as Executive Officer of the USS Ranger, and on December 26, 1941, assumed command of the USS Long Island. From May until December 1942 he was Chief of Staff and Aide to the Commander, Carriers, Atlantic Fleet, and received a Letter of Commendation with authorization to wear the Commendation Ribbon the Secretary of the Navy, for meritorious service as Chief of Staff to Commander Air Group, Western Naval Task Force, during action off Casablanca on November 8, 1942.

On January 2, 1943 he reported to the Bethlehem Steel Company, Quincy, Massachusetts, to fit out the USS Bunker Hill, which he commanded from her commissioning, May 25, 1943, until February 5, 1944. He was awarded the Silver Star Medal for “conspicuous gallantry and intrepidity as Commanding Officer of the USS Bunker Hill in action against enemy Japanese forces during the assault on Rabaul Harbor, November 11, and the invasion and occupation of the Gilbert Islands, November 18 to 26, 1943.

He was also awarded the Legion of Merit with Combat “V,” for “exceptionally meritorious conduct… as Commanding Officer of the USS Bunker Hill, during the capture and occupation of Tarawa and Makin, the capture and defense of the Marshall Islands and strikes on Nauru and Kavieng, from November 29, 1943 to February 5, 1944…” He is entitled to the Ribbon for and a facsimile of, the Presidential Unit Citation to the Bunker Hill “for extraordinary heroism in action against enemy Japanese forces in the air, ashore and afloat in the South Central, Southwest, and Western Pacific, from November 11, 1943 to May 11, 1945…”

In February 1944 he was promote to Rear Admiral, and reported for duty as Deputy and Chief of Staff and Aid to the Commander, Aircraft, Pacific Fleet, at Pearl Harbor, Territory of Hawaii, and remained in that assignment until October 1944. For “meritorious service as Deputy Commander Air Force, Pacific Fleet, and as Aide and Chief of Staff to the Commander forces in the Pacific War Area, from February to September 1944…” he was awarded the Bronze Star Medal. The citation points out that he “supervised and directed Air Force planning in preparation for three major offensive operations ad controlled the movement of Air Force Units to permit maximum preparation for combat and insure the availability of our fighting forces for employment against the enemy. In addition, he coordinated the efforts of all divisions of the staff in the formulation of effective plans necessary for the logistic support of our forces…”

On his return to the United States, he became Commander Fleet Air, Seattle, Washington. He was awarded a Gold Star in lieu of a Second Legion of Merit for exceptionally meritorious conduct in the performance of outstanding services to the Government of the United States as Commander Fleet Air, Seattle, from September 29, 1944 to June 18, 1945… Rear Admiral Ballentine employed every means at his high degree of care in the selection and training of personnel which was reflected in the outstanding combat records of the units which came under his command. By his skill in resolving the many administrative complexities of his task, he performed a service essential to the successful execution of a mission of highest importance to the war effort…”

After brief duty in command of Carrier Division 7, with his flag in the USS Bon Homme Richard, from June until August 1945, he was assigned duty as Fleet Liaison Officer for Commander in Chief, Pacific, at Headquarters of the Supreme Commander for the Allied Powers, Pacific. He had the honor of landing at Atsugi Airport on August 30 in the airborne occupation of Japan and of escorting General of the Army Douglas MacArthur to the surrender ceremonies aboard the USS Missouri on September 2, 1945.

“For exceptionally meritorious conduct… as Liaison Officer between the Commander in Chief, United States Pacific Fleet, and the Supreme Commander for the Allied Forces for the occupation of Japan from August 30 to December 20, 1945…” he was awarded a Gold Star in lieu of a Third of Merit. The citation continues in part: “As the representative of the Commander on Chief of the Pacific Fleet, Rear Admiral Ballentine accompanied the Supreme Allied Commander on his flight into Japan on August and, by his astute judgment and initiative, rendered invaluable service in connection with the arrangements for the formal surrender of Japan, the recovery of Allied personnel from Japanese prison camps, the repatriation of the Japanese from overseas, the seizure of  Japanese naval vessels, stations and equipment, and the removal of mines from Japanese waters…”

In January 1946 he was ordered to the Military Staff Committee of the Security Council, United Nations, and was designated Chief of Staff and Aide to the Representative of the Chief of Naval Operations on the Committee. In July 1947 he assumed command of Carrier Division One, and made a four-month cruise in the Mediterranean in the USS Midway in the winter of 1947-48 and a similar cruise with the Sixth Task Fleet in the USS Roosevelt in 1948-49.

He returned to the Navy Department for duty as a Member of the General Board from May to November 1949 when, with the accompanying rank of Vice Admiral, he assumed command of the Sixth Task Fleet at Toulon, France. On April 11, 1951 he became Commander Air Force, Atlantic Fleet, and served in that capacity until relieved of all active duty depending his retirement, effective May 1, 1954.

It is of interest that Admiral Ballentine, as Commander Carrier Division One and Commander Sixth Fleet, spent four consecutive Christmas Days in Naples, Italy.

In addition to the Silver Star Medal, the Legion of Merit with two Gold Stars and Combat “V,” the Bronze Star Medal, the Commendation Ribbon, and the Presidential Unit Citation Ribbon, Admiral Ballentine has the World War I Victory Medal; the Yangtze Service Medal; the American Defense Service Medal with Bronze “A”; American Campaign Medal; the European-African-Middle Eastern Campaign Medal with one bronze star (five engagements); the World War II Victory Medal; the Navy Occupation Service Medal, Asia Clasp; and the National Defense Service Medal. He also has the Navy Expert Pistol Shots Medal. From the Government of Greece, he received the decoration Grand Cross of the Order of Phoenix, and was named Commander in the French National Order of the Legion of Honor.