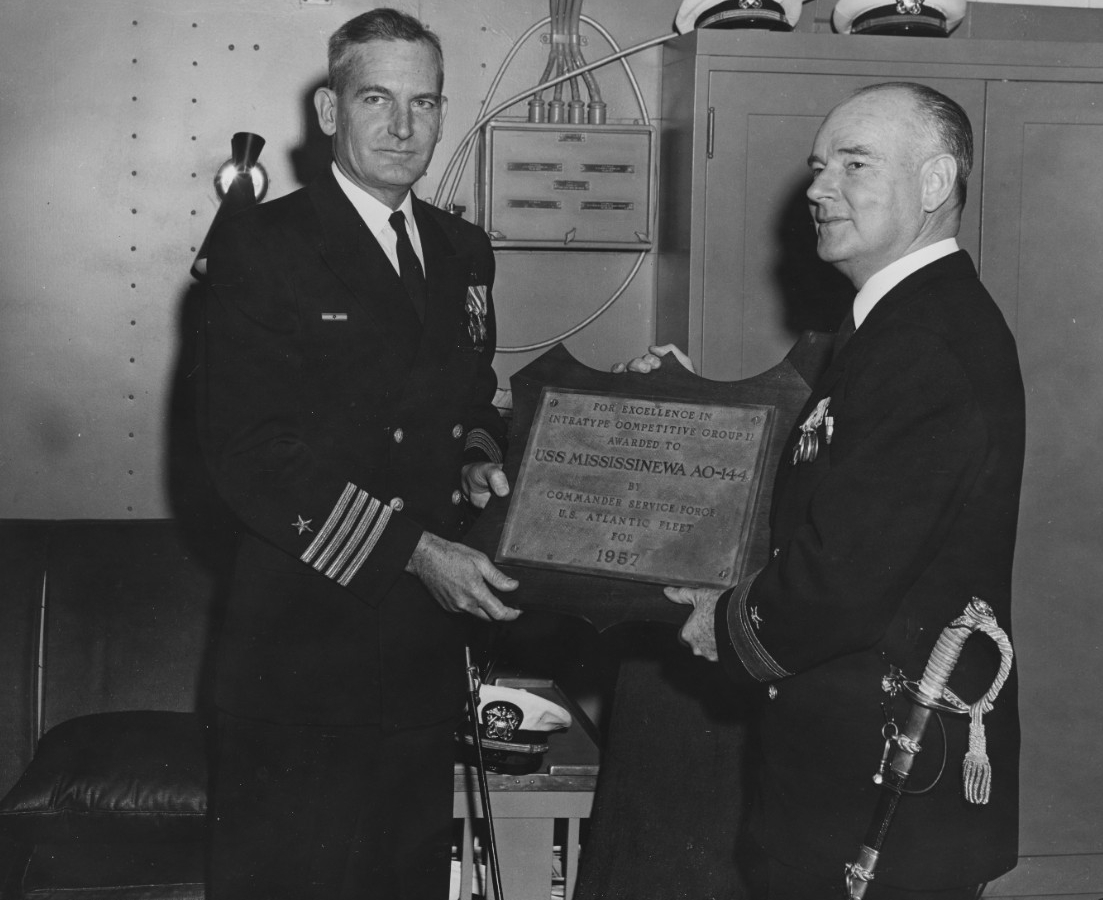 Ira Hudson Nunn was born in Camden, Arkansas, on 16 March 1901, son of the late James B. and Henrietta Hudson Nunn. He attended Marion Military Institute in Marion, Alabama, prior to entering the US Naval Academy from Arkansas in 1920. Graduated and commissioned Ensign on 4 June 1924, he subsequently attained the rank of Captain to date from 1 June 1943. On 12 July 1951 his selection to the rank of Rear Admiral was approved by the President; his promotion to that rank dates from 1 January 1952.

Following graduation from the Naval Academy in June 1924, he had brief duty under instruction in the Bureau of Ordnance, Navy Department, Washington, DC, after which he served for a year in USS Sharkey, and after torpedo instruction at the Naval Torpedo Station, Newport, Rhode Island, had consecutive duty afloat from July 1926 to May 1931 in USS New Mexico, USS Sloat and USS Upshur.

In June 1931 he reported to the Office of the Judge Advocate General, Navy Department, and after three months' postgraduate instruction, continued the course in Law at the Harvard University Law School, Cambridge, Massachusetts, from which he received the degree of Bachelor of Laws in July 1934. In September of that year he reported to Sixteenth Naval District Headquarters, for duty in USS Monocacy, on Yangtze patrol. He remained on Asiatic station until May 1937, transferring in July 1935 to USS Tutuila, assigned to Yangtze Patrol, and in May 1936 to USS Augusta, flagship of commander in Chief, Asiatic Fleet.

In September 1943 he assumed command of Destroyer Division 2, and from March 1944 to June 1945 commanded Destroyer Squadron 47 with additional duty as Commander Destroyer Division 54. While in the Pacific Area he participated in operations at Pearl Harbor, Salamaua, Tarawa, Kwajalein, Eniwetok, Emirau, Solomons, Marianas, Pelelieu, Leyte, Luzon, Iwo Jima, and Okinawa.

He was awarded the Navy Cross "for extraordinary heroism as Commander of the Screen of Task Group SEVENTY SEVEN POINT FOUR, during our Amphibious landing operations on the shores of Leyte Gulf, Philippine Islands, from October 18 to 29, 1944…” The citation credits him with "pressing home numerous successful attacks against hostile aircraft and surface ships during this decisive engagement..." in spite of repeated attack by Japanese suicide bombers, and submarine infested water.

He was also awarded the Bronze Star Medal and a Gold Star in lieu of the second Bronze star Medal. The citations follow in part:

Bronze Star Medal:
"For heroic achievement as Commander Destroyer Division FIFTY-FOUR, in connection with operations against enemy Japanese held Okinawa Gunto, from March 14 to May 14, 1945...(He) expertly deployed his ships for maximum strength during carrier operations in support of the Okinawa Campaign and, by his expert direction of activities under incessant aerial bombardment by Japanese aircraft in close proximity to the Japanese mainland, contributed materially to the destruction of two hostile submarines..."

Gold Star in lieu of the second Bronze star Medal:
"For meritorious achievement while serving as Commander Destroyer squadron FORTY-SEVEN with Flag in the USS McCORD during action against an enemy Japanese submarine in the Pacific War Area the night of April 17-18, 1945...upon making contact with the hostile submarine, skillfully maneuvered his ships to launch devastating strike...directed a series of fifteen brilliantly coordinated depth-charge attacks to damage this important undersea craft and contributed to its eventual destruction by two relieving destroyers...”

In July 1945 he returned to the Navy Department, and after brief temporary duty in the Bureau of Naval personnel, served for three years in the Office of the Judge Advocate General. He received a Letter of Commendation with Ribbon, from the Secretary of the Navy for "outstanding performance as Legislative Counsel in the Office of the Judge Advocate General from August 1945 to August 1948...” in which he was cited for "exceptionally capable handling of the Navy Department's postwar legislative program" and rendering distinctive service not only in his own office but in “aiding the Navy Department in its relations with the Congress in matters other than of a legislative character...”

On 10 August 1948 he assumed command of USS Manchester (CL-83), and relieved a year later, he reported again to the Bureau of Naval Personnel for assignment. In November 1949 he became Executive Assistant and Senior Aide to the Chief of Naval Operations, Department of the Navy. On 23 May 1952 his appointment to Judge Advocate General of the Navy was confirmed by the US Senate, and he assumed the duties of that office on 18 June 1952. He was Commander Cruiser Division TWO from 5 August 1956 until October 1956, when he became Commander Service Force, US Atlantic Fleet. On 1 November 1958 he assumed duty as Senior Member United Nations Command Military Armistice Commission, Seoul Korea.

On 14 July 1959 he became Chief of the Military Assistance Advisory Group, Norway, with headquarters in Oslo and in August 1961 he reported as Commandant of the Ninth Naval District, with headquarters in Great Lakes, Illinois. "For exceptionally meritorious conduct...(in that capacity) from August 1961 to March 1963..." he was awarded the Legion of Merit. The citation further states in part:

"Exercising marked professional skill, resourcefulness, and organizational ability, Rear Admiral Nunn effectively coordinated the efforts of the various naval commands in the Ninth Naval District, materially strengthening and making more responsive their support to the Navy. His superb leadership, diplomacy, and sympathetic understanding have made a lasting impression and have been strong contributing factors toward the mutual understanding and coordination of effort existing among the commands and communities of his District. An inspiring, dedicated, and articulate leader, (he) has rendered valuable service in promoting harmonious relations and in enhancing the prestige of the Navy..."

On 1 Apri1 1963 he was transferred to the Retired List of the US Navy.