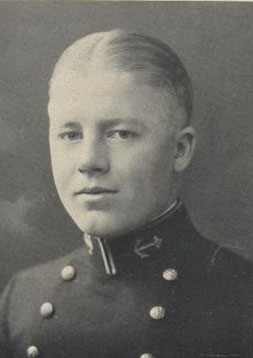 Morton Klyne Fleming was born in Winchester, Indiana, on 6 December 1904, son of Morton K. and Kathryn (Jasper) Fleming. He attended Culver (Indiana) Military Academy and was appointed a Midshipman from the Second District of Montana, entering the US Naval Academy, Annapolis, Maryland in June 1922. He was graduated and commissioned Ensign on 2 July 1926 and subsequently advanced in rank attaining that of Captain, to date from 10 March 1945. On 1 October 1949 he was transferred to the Retired List of the US Navy and was advanced to the rank of Rear Admiral on the basis of combat awards.

Following graduation from the Naval Academy in 1926, he remained there for the summer course in aviation and in October of that year joined the USS Procyon. One year later he transferred to the USS Decatur and had duty in that destroyer until March 1928. He next had flight training at the Naval Air Station, Pensacola, Florida, and after receiving his "Wings," he was assigned in March 1929 to Aircraft Squadrons, Battle Fleet and a month later joined Observation Squadron Five-B, based on the USS Tennessee.

Between June and October 1931 he served with the Coco Solo Ferry Detachment, based at Hampton Roads, Virginia. After duty with Aircraft Squadrons, based at the Fleet Air Base, Coco Solo, Canal Zone, he reported in August 1932, for duty with Patrol Squadron Five-S, attached to the Fleet Air Base, Coco Solo. He had instruction at the Postgraduate School, Annapolis, Maryland, June 1933 - May 1935, and for a year thereafter continued instruction at the California Institute of Technology at Pasadena, from which he received the degree of Master of Science in aeronautical engineering in 1936.

From June 1936 to May 1938 he had duty in the USS Langley, after which he served with Patrol Squadron Nine, based on the USS Wright, flagship of Commander Aircraft, Scouting Force. In June 1939 he was assigned to the Bureau of Aeronautics, Navy Department, Washington, DC, and was serving there when the United States entered World War II, 8 December 1941. In November 1943 he reported for fitting out duty in the USS Orca at the Lake Washington Shipyards, Houghton, Washington and assumed command of that seaplane tender when she was commissioned, 23 January 1944. In December of that year he transferred to command of the USS Tangier. While in command of those seaplane tenders he also had duty as Commander of various task groups in the Pacific War Area. He was awarded the Legion of Merit and a Gold Star in lieu of a Second Legion of Merit, each with Combat "V." The citations follow in part:

Legion of Merit: "For exceptionally meritorious conduct in the performance of outstanding services... as Commander Task Unit Seventy Three Point Two Point Two, during the period from May 26 to September 10, 1944. Directing offensive night strikes against the enemy, (he) assisted the forces under his command in the destruction of 83,393 tons of enemy shipping and in the damaging of an additional 23,425 tons..."

Gold Star in lieu of second Legion of Merit: "For... outstanding services to the Government of the United States as Commander Task Group Seventy Three Point Four and Task Unit Seventy Three Point Four Point Four during operations against enemy Japanese forces in the Pacific War Area from September 11, 1944 to June 15, 1945. Skillfully leading the ships of his command during this period, (he) ably directed air-sea rescue missions and night offensive strikes which resulted in the infliction of extensive damage on enemy shipping. In charge of a squadron of PBM-3D planes during March and April, he contributed materially to the success of these aircraft in sinking or damaging over 33,000 tons of Japanese shipping for a combined total of 120,800 tons of shipping destroyed or damaged by his command..."

After the cessation of hostilities, he returned to the United States and in October 1945 reported as Bureau of Aeronautics Representative at the Chance-Vought Aircraft Corporation, Stratford, Connecticut. In May 1948 he became Assistant Director of the Naval Research Laboratory, Washington, DC, and was so serving when relieved of all active duty pending his retirement, effective 1 October 1949.