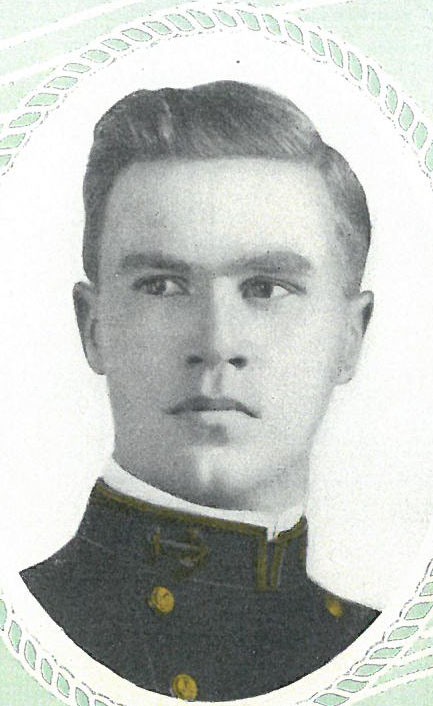 Commodore Bailey, born in Somerville, Massachusetts, May 3, 1887, attended Tufts College, Medford, Massachusetts, for one year, before his appointment to the US Naval Academy, Annapolis, Maryland, from his native state in 1907. Graduated in June 1911 he served at sea as then required by law, and was commissioned Ensign, March 7, 1912. His subsequent promotions were as follows: Lieutenant (junior grade), March 7, 1915; Lieutenant, March 7, 1918; during the World War was appointed to the temporary rank of Lieutenant Commander, was commissioned in that rank, December 31, 1921; Commander, June 4, 1931; Captain, August 1, 1939 and Commodore, November 2, 1945. He was transferred to the Retired List of the US Navy on November 1, 1946.

After graduation in 1911, Commodore Bailey joined USS Nebraska and served in that battleship until December 1914 when he was transferred to USS Des Moines with duty first as watch officer later as engineer officer serving in that cruiser until October 1918. In January 1919 he reported for duty as first lieutenant in USS Utah, serving until September of that year, when he reported for duty as an instructor in the Marine Engineering and Naval Construction Department, Naval Academy, Annapolis, Maryland.

Commodore Bailey had consecutive command of USS McKee, USS Hopkins, and USS Sturtevant from July 1921 until December 1923. The following three years he served in the Fleet Maintenance Division, Bureau of Engineering, (later combined with the Bureau of Construction and Repair and designated Bureau of Ships), Navy Department, Washington, DC. Returning to sea he was first lieutenant and later engineer officer of USS Mississippi from January 1927 until September 1929 and received two Letters of Commendation from the Secretary of the Navy for the engineering excellence and efficiency of the ship. The following months he reported to the Bureau of Engineering, Navy Department, Washington, for duty in the Fleet Maintenance Division. From January 1932 until June 1934 he was executive officer of USS Medusa. The following two years he was a member of the Naval Examining Board, Navy Department, Washington, DC, and from June 1936 until May 1937 he had instruction at the Naval War College, Newport, Rhode Island, completing the senior course there.

In June 1937 Commodore Bailey reported for duty as executive officer of USS Houston, serving in that cruiser until July 1939. During his two years of duty in that battleship, she was used by the President of the United States on several cruises. He received a Letter of Commendation from the President relative to the efficiency of Houston. He then served as a member, Board of Inspection and Survey, Pacific Coast Section, Long Beach, California, until December 19, 1940. Later that month he reported to the Willamette Iron and Steel Company, Portland, Oregon, for duty in connection with the conversion of the SS City of Norfolk assuming command when that ship was commissioned USS Neville on May 14, 1941. While he was serving in that command the United States entered World War II, and that ship as a unit of the First Amphibious Force, for a year had been engaged in intensive amphibious operations with the First Marine Division. She served in the North Atlantic and European waters until March 1942 when together with other units she sailed for the South Pacific and in May landed the first army units on the Island of Tongatabu, Tonga Island. In July 1942 the Neville, with other units of the First Amphibious Corps and other units of the Fleet sailed for the Solomon Islands, taking part in the first offensive in the Pacific War, against those islands on August 7, 8, and 9, 1942 with the special objective, the Islands of Tulagi, Gavutu and Tanamboga.

Detached from command of the Neville in August 1942 he reported for duty as Commander, Transport Division 14, USS Barnett, flagship. During the next five months he aided in the defense of Guadalcanal Island, in commanding task groups and taking part in task forces aiding in the defense of that island.

Transferred to the Atlantic Fleet Commodore Bailey commanded the USS Barnett from December 1942 until March 1943, during which time she participated in operations against Sicily and Italy, and conducted Task Force 39 to Atlantic Ports. Returning to the United States in March 1943 he was assigned duty as Commanding Officer, Receiving Ship, San Francisco, California. On June 14, 1944 he reported for duty as Chief of Staff and Aide to the Commandant, Ninth Naval District, Great Lakes, Illinois, and in November 1945 he assumed additional duty with the rank of Commodore, as Deputy Commandant, Ninth Naval District and Deputy Commander, Midwest Naval Area. For his services in that duty he was awarded the Legion of Merit with the following citation:

“For exceptionally meritorious conduct in the performance of outstanding services to the Government of the United States as Chief of Staff to the Commandant, Ninth Naval District and concurrently as Commander, Midwest Area, from June 1944, to October 1945. Charged with directing the rapidly expanding functions of a year naval command, Commodore (then Captain) Bailey was responsible for the efficient reorganization of the Ninth Naval District and Midwest Naval Area. Alert and skillful in planning administrative details and in carrying out a plan for decentralizing and delegating authority, he achieved the integration of over 1100 naval activities rendering invaluable support to forces afloat. His competent and intelligent leadership of this organization throughout a critical period of the war reflects the highest credit upon Commodore Bailey and the United States Naval Service.”

He was transferred to the Retired List of the US Navy in the rank of Commodore on November 1, 1946.