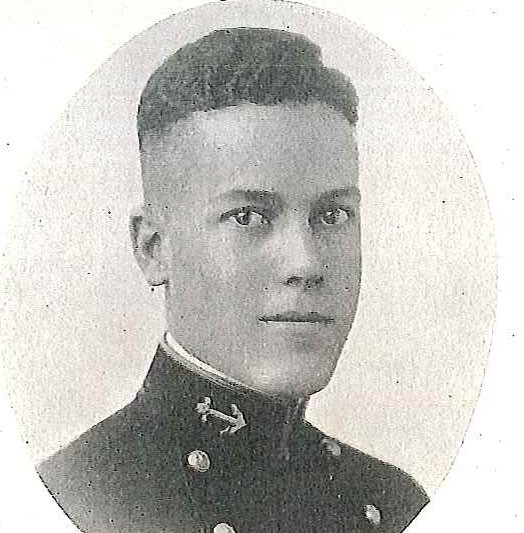 Jesse Hicks Carter was born in Texarkana, Arkansas on April 29, 1900, son of the late Judge J.M. Carter, Jr. and Mrs. Nellie Estes Carter of Texarkana, Texas. He attended Philips Exeter Academy, Exeter, New Hampshire, 1941-1917, before entering the United States Naval Academy, Annapolis, Maryland, by senatorial appointment from Arkansas in 1917. While a midshipman he served in  USS Wisconsin, attached to the Atlantic Feet the summer of 1918. He was graduated and commissioned Ensign in 1920 with the Class of 1921, and thereafter advanced in rank to that of Captain to date from June 20, 1942. His transfer to the Retired List of the Navy dates from July 1, 1950, when he was promoted to Rear Admiral on the basis of combat awards.

When detached from the Navy Academy in 1920, he was assigned to USS Seattle, and transferred later that year to  USS Salem. Thereafter for five years he served consecutively in USS Breese, USS William Jones, USS Kennedy, and USS Tarbell, of Destroyers, Battle Force, and USS Stoddert, where he served as Engineer Officer, and later as Gunnery Officer, until August, 1926. He then served two years at the US Naval Academy as Inspector in the Department of Seamanship. In June, 1928 he reported to USS New Mexico having duty in the Anti-aircraft batteries and Turret Divisions of that battleship until April, 1931.

From June, 1931 to May, 1933 he was attached to the Ford Instrument Company, Long Island City, New York, as Assistant Inspector of Ordnance. In June, 1933 he reported aboard USS Mississippi, and from June, 1935 until detached in March, 1936, he served as Assistant Gunnery Officer of that battleship. He then reported to the Naval Gun Factory, Navy Yard, Washington, D.C., and had duty there until July, 1938 consecutively as Officer in Charge Ordnance Schools; Inspector of Optical Material; and Assistant Production Officer, Optical Shop.

Returning to duty at sea, he commanded USS Drayton, destroyer Pacific Fleet, on the west coast, and in the fall of 1940, that unit joined the Fleet at Hawaii. When relieved of command of the Drayton, he reported to the Navy Yard, Washington, DC as Head of the Inspection Department, Naval Gun Factory, serving from April, 1941 to November, 1942. He was then assigned to staff duty as Ordnance Officer of the staff of Commander Naval Bases, South Pacific Area. In May, 1943 he was named Commander Destroyer Squadron Five with additional duty as Commander Destroyer Division Nine. He was awarded the Silver Star Medal and the Bronze Medal with combat distinguishing device “V”, the citation stating in part:

Silver Star Medal: “For conspicuous gallantry and intrepidity as Officer in Tactical Command of a Destroyer Squadron supporting amphibious operations against New Guinea. Fighting off recurrent waves of hostile aircraft which menaced our assault and re-supply forces, (his) squadron kept up a withering barrage of antiaircraft fire which destroyed numerous Japanese bombers and torpedo planes. During a particularly hazardous period of low-level aerial attacks, his skillful maneuvering of the destroyer escort and covering forces prevented serious damage to our own units and inflicted disastrous losses upon the enemy…”

Bronze Star Medal, with “V”: “For meritorious achievement as Commander Squadron Five from November 1943, to January 1944, and as Commander of Destroyer Squadron Sixty Two from October to December, 1944… (He)… contributed to… the know destruction of three enemy planes and probable destruction of four others. Directing the ships under his command with skill and daring, he guided the squadron through man enemy air attacks including a particularly severe air raid on December 26, which seriously damaged the Shaw and slightly damaged the Lamson and Mugford. As Commander of Destroyer Squadron Sixty One conducting picket and screening activities as part of a Fast Carrier Task Force, he contributed materially to the air support of the landings in the Philippines…”

After brief temporary duty in the Bureau of Naval Personnel, Navy Department, Washington, DC, he was assigned as Commander Destroyer Sixty One, and additional duty as Commander Destroyer Division 121 (then training in Bermuda), and joined the Pacific Fleet in September, 1944. He was awarded the Legion of Merit for outstanding services, the citation further stating: “ … as Commander, Destroyer Squadron Sixty-one and Commander Screen of a Task Group actively engaged in the support of landing operations of the Joint Expeditionary Force, and in operations against Iwo Jima, Chichi Jima, Okinawa, MiYako Jima, Ishigakx Jima, Hachijo Jima, and the Japanese Mainland, from February 10 to March 21, 1945… delivering a smashing naval bombardment of shore installations on March 1 and 2, and rendering valiant service in the face of tremendous opposition. Maintaining his task group at the peak of combat efficiency during these vital operations, (he)… contributed essentially to the success of our strategic offensive in this area and to the continued prosecution of the war in the Pacific Theater.”

On April 1, 1945, he was ordered to the Bureau of Ordnance, Navy Department, and served as Assistant Chief of Bureau for Planning and Progress until receiving orders in February, 1947 to staff duty on the staff of Commander Second Task Fleet. He was so serving when relieved of active duty pending his transfer to the Retired List of the Navy on July 1, 1950.