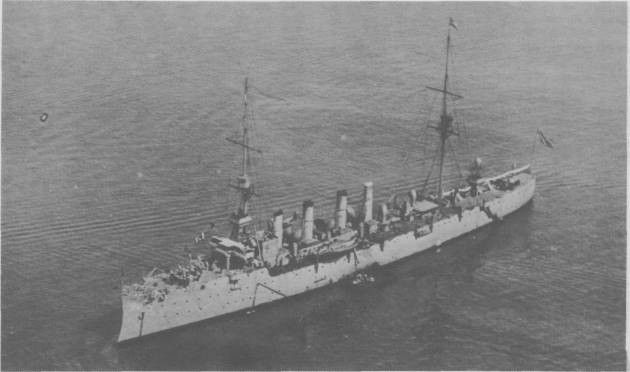 Caption: Salem (Cruiser No. 3) shortly after World War I, with a small fire-control top on a square platform near the base of her pole foremast. With her sister ships, Chester and Birmingham, Salem was built as a fast "scout cruiser" for fleet reconnaissance, corresponding to the light cruisers being built at the time for foreign navies. They were the subject of a significant experiment; in an effort to produce better propulsion plants for its new ships, the Navy built Salem with Curtis turbines. Chester had the earlier Parsons turbines, while Birmingham received the long-established reciprocating engines. Lessons learned from operating the three competing machinery plants in ships of the same characteristics proved valuable, although relatively poor performance of turbines in Salem and Chester demonstrated that considerable improvement was required before the newer engines would be fully suitable for naval use.

As one of the Navy's first turbine-engined warships, Salem departed Boston on 17 October 1908 to carry out extensive trials along the Atlantic coast. Joining her sister scout cruisers, Birmingham and Chester, in the Scout Cruiser Division in June 1909, Salem cruised in the Atlantic, making one voyage to Funchal, Madeira. Assigned to the 5th Division, Atlantic Fleet, in, 1910, Salem briefly deployed to Haitian waters during August 1911, returning to the New York Navy Yard on 11 September. Subsequently placed in reserve at the Boston Navy Yard on 20 April 1912, Salem relieved Wabash as receiving ship there on that date and served until 7 October 1912. Then reassigned to the Reserve Force, Atlantic Fleet, Salem subsequently made a cruise to Gibraltar and returned to the United States in late March 1913. Arriving at Hampton Roads on 25 March, she shifted to Philadelphia on the 30th.

Salem remained at Philadelphia, in reduced commission, into 1914. On 23 April 1914, Salem was placed in full commission and assigned to the Special Service Squadron for duty in Mexican waters. She cruised off the Mexican port of Vera Cruz supporting United States operations ashore until assigned to the Cruiser Squadron, Atlantic Fleet, on 2 September 1914. Departing Vera Cruz on 19 September, Salem arrived at Boston on 1 October for service with the Atlantic Fleet but was detached from the Cruiser Squadron on 25 November, and was again placed in reserve on 1 December 1914. She relieved Brooklyn as receiving ship at the Boston Navy Yard on 12 March 1915 and served there until assigned to the Caribbean on 21 May 1916. Cruising off Mexican and Dominican ports, Salem transported Marine detachments, assisted in radio communication links, and protected United States interests until returning to the Philadelphia Navy Yard to be placed out of commission on 2 December 1916.

Following United States entry into World War I, Salem was recommissioned on 21 April 1917 for duty as a receiving ship at the Philadelphia Navy Yard. Two days later, however, she was decommissioned and towed to the Boston Navy Yard to have her original Curtis turbines replaced by General Electric turbines.

Recommissioned on 25 July 1917, while still undergoing overhaul, Salem stood out of Boston harbor on 12 March 1918 for New London, Conn., to join a force gathering to convoy submarine chasers across the Atlantic. Between 31 March and 15 June 1918, she served as flagship for two convoys of submarine chasers, leaving both at Ponta Delgada, Azores, and returning westward. On 18 June, she became a flagship of a flotilla of 12 submarine chasers assigned to Key West to operate against German submarines. Arriving at Key West on the 22d, Salem's force carried out antisubmarine patrols off Florida and as far south as the Yucatan Peninsula through the remainder of World War I.

On 27 November, the force was disbanded; and, after an overhaul at the Boston Navy Yard, Salem steamed to the west coast. Designated CL-3 on 17 July 1920, she was decommissioned at Mare Island on 16 August 1921; struck from the Navy list on 13 November 1929; and, with cruisers Albany and New Orleans, sold on 11 February 1930 to D. G. Seagraves of San Francisco, Calif., for scrapping.