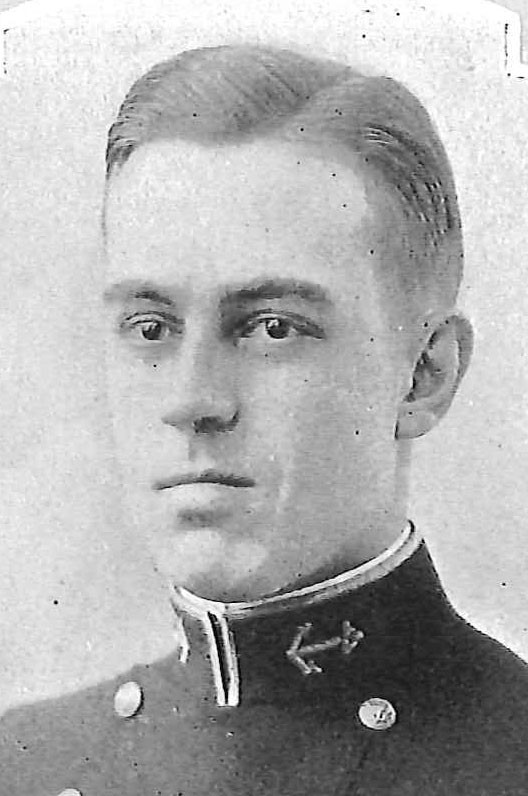 Leonard Cornelius Chamberlin was born in Everett, Massachusetts, on August 18, 1906, son of Lieutenant Commander Joseph Chamberlin, USN, Retired, and Mrs. (Annie Roberts) Chamberlin. He was graduated from McKinley High School, Honolulu, Territory of Hawaii, in June 1922, and a year later, after preparing at Werntz Preparatory School, entered the US Naval Academy, Annapolis, Maryland. As a Midshipman he participated in athletics (track, tennis, and lacrosse), and was a member of Musical Clubs. Graduated and commissioned Ensign on June 2, 1927, he subsequently advanced to the advanced to the rank of Captain, with date of rank March 20, 1945.

Upon graduation from the Naval Academy, he was assigned to USS Omaha, in which he served for two years as a junior office in the Gunnery, Navigation and Engineering Department. He then had consecutive duty in gunnery and communications, on board USS Doyen and USS Zane during the period June 1929 until December 1931. He attended the Submarine School, New London, Connecticut, for six months to follow, and from June 1932 until June 1934 served as Executive Officer, Torpedo Officer, Engineer and Communication Officer of USS S-19 and USS S-21.

A student at the Postgraduate School, Annapolis, Maryland, for two years, he completed the course in Mechanical Engineering at the University of California, at Berkeley, in June 1937, at which time he was awarded the degree of Master of Science. During the next four years he had successive service afloat as Electrical Officer of USS Pennsylvania, Engineer Officer of USS Shaw, and as Executive Officer of USS Tucker. In May 1941 he reported to the Navy Yard, Pearl Harbor, T.H., where he was Shop Superintendent and Machinery Planning Officer until September 1943, including the first part of the World War II period.

He next served as Assistant Chief of Staff for Logistics to Commander Destroyer, Pacific, and after fitting out USS Hugh W. Hadley (DD 774), commanded that destroyer from her commissioning November 25, 1944 until January 1945. During the latter months of the war, he commanded Destroyer Division 96 in the western Pacific. He was awarded the Legion of Merit with Combat “V,” and citation as follows: “For exceptionally meritorious conduct…( in that command), from march 18 to May 4, 1945. Skillfully maneuvering the ships of his division during hostile suicide air attacks, (he) delivered effective gunfire resulting in the destruction of numerous enemy planes and kept damage to the vessels of his command to a minimum. In addition, he furnished valuable reports concerning approaching hostile planes which allowed the combat air patrol to conduct and destroy many aircraft and which kept the main Task Group alerted against surprise attacks.

He was also awarded the Bronze Star Medal with Combat “V,” for “meritorious service as Commander Destroyer Division Ninety-Six, operating as a screening and supporting unit of Task Unit 34.8.1, during bombardments against enemy Japanese forces on July 14, July 29-30, and August 9, 1945…” The citation further states: “On July 14, during the first bombardment of the Japanese Empire at Kamaishi, Honshu, Captain Chamberlin contributed materially to the success of three of his destroyers in sinking one enemy coastal cargo vessel and one barge. On the night of July 29-30, during the bombardment of Hamamatsu, Honshu, and again on August 9, during the second bombardment of Kamaishi, the ships under his command operated with distinction as part of the screen of the bombardment group…”

In October 1945 he returned to the United States, and for twenty months thereafter served as Shop Superintendent at the Naval Dry-docks, Hunter Point, San Francisco, California, under cognizance of the Commandant, Navy Yard, Mare Island. He was a student at the Naval War College from July 1947 until June 1948, after which he became Assistant Chief of Staff, for Logistics, to Commander Naval Forces, Western Pacific. In July 1949 he was detached for duty until January 1952 on the staff at the Naval War College, Newport, Rhode Island There he served at the Naval War Logistics Department, Head of the Department of Intelligence, and Secretary of the Department of Administration.

Again ordered to sea, Captain Chamberlin commanded USS Rockbridge from February to September 1952, and for a year thereafter was Chief of Staff to Commander Amphibious Group Four. In September 1953 he assumed command of Destroyer Squadron Four, and on December 22, 1954 was ordered detached ad to his present duty as Chief of staff and Aide to the Commandant, Eleventh Naval District, at Headquarters, San Diego, California.