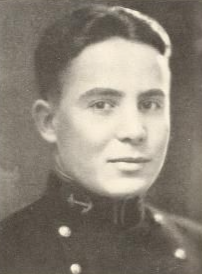 Captain New, born in Houston, Texas, on February 11, 1903, lived in Tod Inlet, British Columbia; Los Angeles, California; Hudson, New York; and New York City during his boyhood. He attended DeWitt Clinton High School in New York City and later had courses at night at the New York University School of Business, while he was employed as an export clerk by Whithall Tatum Company of New York City and later as a surveyor's rodman for the North Jersey District Water Supply Commission. On August 12, 1920 he enlisted in the US Navy and served aboard USS Pennsylvania for a year. He was honorably discharged on August 11, 1921 to accept an appointment as Midshipman at large from the State of New York, and reported on the same day to the United States Naval Academy at Annapolis, Maryland. While at the Academy he was a member of the Varsity Wrestling Team, and participated in Intra-Mural Gymnastics, Lacrosse, and Football. Graduated and commissioned Ensign on June 4, 1925, he subsequently advanced to the rank of Captain in August, 1944, to rank from July 20, 1943.

Following graduation in June 1925, he was assigned to USS California, and made the Australian Cruise in 1926 aboard that battleship. On October 16, 1926, he reported to the Naval Training Station San Diego, California, where he served until April 6, 1927. The next year he served aboard USS Henderson on the Asiatic Station. Ordered to the Submarine Base, New London, Connecticut, for instruc­tion at the Submarine School, he completed the course there in Dec­ember 1928 and early in 1929 was assigned to the USS S-39 to serve until July 1931.

Following brief duty in November and December 1931, at the Navy Yard, Mare Island, California, he proceeded to the Navy Yard, Wash­ington, DC, for instruction at the Deep Sea Diving School. He reported on July 5, 1932, to Submarine Squadron Four for duty aboard the USS S-47 and later the USS S-42, with additional duty in connection with lung training and tank training at Pearl Harbor, T.H. From May 1934 to May 1936 he served aboard the US S-32, after which on May 9, 1936, he assumed command of the USS S-34, and served in that command for one year.

Captain New died at the 97th General Hospital, Atlantic Area, on November 4, 1945, of disease. He was posthumously awarded the Legion of Merit for services as Chief of Staff of Commander, Task Force 124, from December 1, 1944 to November 1, 1945.