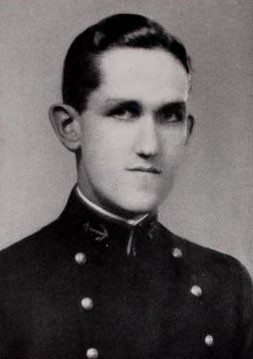 Benjamin Coe, son of the late Louis Johnson Coe and Lydia Williams Coe, was born in Springfield, Illinois, on March 19, 1906. He graduated from Springfield High School, and was appointed a midshipman from Illinois, entering the United States Naval Academy, Annapolis, Maryland, in June, 1925. He graduated and was commissioned Ensign in 1929, and was promoted in rank thereafter to the Captain (temporary) dating from March 30, 1945. His transfer to the Retired List of the Navy became effective on September 1, 50, when he was advanced in rank of Rear Admiral on the basis of combat awards.

Upon graduation in 1929, he was assigned duty in the USS Saratoga and served until October, 1930 aboard that carrier. The following year he was attached to Naval Air Station, Pensacola, Florida, for instruction and flight training, and designated Naval Aviator. In November, 1931 he returned to the Saratoga, and served with Torpedo Squadron 2B until December, 1933.

From December, 1933 until July, 1936 he served aboard the USS Maryland, based at San Pedro, California. Ordered to Pearl Harbor, Hawaii, he had duty attached to the Fleet Air Base there, from July 1936 to May, 1938. Returning to duty at sea the following month, he served in the USS Southard, flagship of Destroyer Division 8, Battle Force, US Fleet, later flagship of Mine Division 5, Base Force, at San Diego, California.

In January, 1942 he transferred to the USS Hopkins and serves as Commanding Officer. He was awarded the Silver Star Medal, and   cited as follows: “For conspicuous gallantry and intrepidity as Commanding Officer of the USS Hopkins during action against enemy Japanese forces in the Solomon Islands on August 7 and September 7, 1942. Participating in the initial attack as a screening and minesweeping vessel, the Hopkins…. Frequently re-entered the Guadalcanal-Tulagi Area, despite persistent opposition by Japanese aircraft, in order to escort and protect vessels carrying reinforcements and supplies to the United States Marine forces established on the island shore…. (His) gallant fortitude and conscientious devotion to duty contribution materially to the success of a vastly important mission…”

In December, 1942 he commanded the USS Craven for one month, and the year January, 1943-1944, he served consecutively with the South Pacific Force and the US Pacific Fleet, after which he assumed command of the USS Ross, destroyer. The Ross was survivor of two destructive mine explosions, 286 air raids, an enemy aerial strafing, a typhoon, and finally, a kamikaze crash, when the rugged ship reached Mare Island Navy Yard to undergo overhaul. He received a Gold Star in lieu of the second Silver Star Medal, and the Bronze Star Medal with combat distinguishing device, V, the citation stating in part:

Gold Star in lieu of second Silver Star Medal; “For conspicuous gallantry and intrepidity as Commanding Officer of a destroyer damaged when it stuck two floating mines immediately prior to amphibious landings in the Philippine Island, October 19, 1944. Subjected to relentless enemy bombing and strafing during rescue and salvage operations carried out in the dark of early morning, (he) courageously directed his crew in fighting off the savage attacks and, by his cool, decisive leadership and intelligent efforts, succeeded in stopping leaks, correcting the list and arresting further damage on the seriously crippled and unsupported vessel. An inspiration to his men throughout the hazardous period, Captain Coe was responsible in large measure for the saving of his gallant ship and her crew…”

Bronze Star Medal with Combat V:  “For meritorious service as Commanding Officer of the USS Ross during action against enemy Japanese forces in the Palau, Marianas and Philippine Island Areas from June, 1944 to March 1945. Directing his ship with skill and aggressiveness, (he) provided an effective screen for escort carriers at Saipan and later conducted shore bombardments at Palau, Ulithi, and Homonhon…. Subsequently conducting an effective defense in the narrow, restricted waters of Surgiao Strait, he boldly fought off the attacking hostile aircraft and, despite his mine-damaged ships, succeeded in blasting three enemy planes out of the sky….”

In April, 1945 he was ordered home, and thereafter until July, 1947, he served as Director of Personnel Distribution, First Naval District, Boston, Massachusetts. From July, 1947 to February, 1948, he had duty in command of Destroyer Division 82, Atlantic Fleet. He resumed duty in the First Naval District in August, 1948, as Assistant Chief of Staff for Administration, and was so serving when relieved of active duty pending retirement, September 1, 1950.