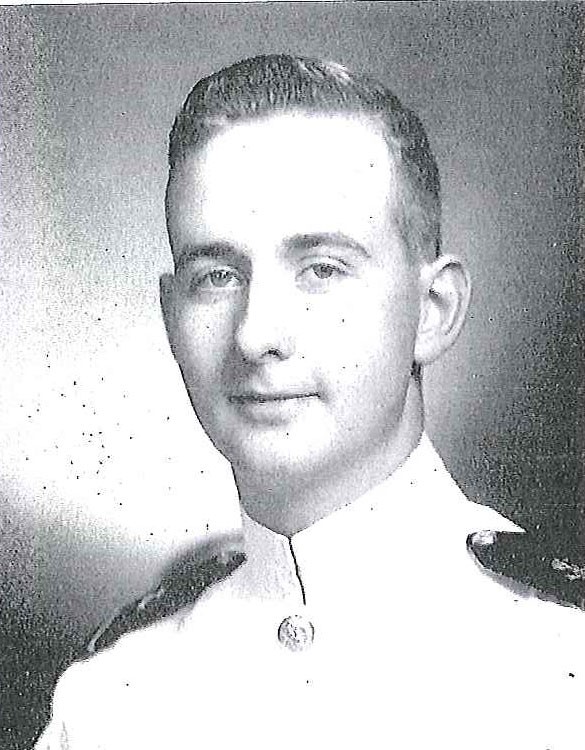 William Wendell Elpers was born in Hammond, Indiana, on October 3, 1934, son of Wendell H. and Gladys Dale (Brannon) Elpers. He attended Fort Branch (Indiana) High School, prior to entering the US Naval Academy, Annapolis, Maryland, on appointment from his native state in 1952. Graduated and commissioned Ensign on June 1, 1956, he subsequently advanced in rank to that of Commander, to date from March 1, 1970.

Following graduation from the Naval Academy in 1956, he joined USS Hale (DD-642), which as a unit of the SIXTH Fleet operated, for a period, in the Mediterranean during the Suez crisis. The Hale was awarded the Battle Efficiency “E” in 1956. Detached from that destroyer in May 1957 for temporary duty, he reported in December 1957 on board USS Meredith (DD-890) to serve successively as Combat Information Center Officer, Navigator, Gunnery Officer and Operations Officer. While he was assigned to that destroyer, she had alternate tours with the SECOND and SIXTH Fleets and in 1958 served briefly with the Middle East Force, standing by in the Euphrates Delta area after the Iraqi revolution.

In January 1960 he became Executive Officer and Navigator of USS Summit County (LST-1146) and in June 1961 assumed command of USS Whitehall (PCE(R)-856). As a Naval Reserve training ship, homeported in Cleveland, Ohio, she operated on all the Great Lakes and along the East Coast. In addition to commanding that vessel, he also served as Officer in Tactical Command of two-ship reserve training cruises.

From July 1963 to August 1964 he was Personal Aide to the Deputy Chief of Naval Operations (Fleet Operations and Readiness), Navy Department after which he studied the Vietnamese language at the Defense Language Institute, East Coast, Washington, DC. In February 1965 he was assigned to the Naval Advisory Group, US Military Assistance Command, Vietnam, where he had duty as Vietnamese Navy River and Sea Force Advisor and Counter Insurgency Plans Officer. In that capacity, he also served as Project Officer and Planning Officer for Operation GAME WARDEN (Task Force ONE HUNDRED SIXTEEN) and as such planned and wrote the first operations order covering all facets of the Navy Delta River Patrol Force. “For meritorious service. . . in armed conflict against Communist insurgent forces in Vietnam, from February 25, 1965 to February 22, 1966. . .” he was awarded the Bronze Star Medal with Combat “V”. The citation further states in part:

“. . .Lieutenant Commander Elpers participated in two night patrols, four anti-sea-infiltration patrols and 17 naval gunfire support missions. . .” He is also entitled to the Ribbon for the Navy Unit Commendation awarded the Naval Advisory Group of the US Military Assistance Command, Vietnam.

He reported in April 1966 as Executive Officer of the USS Samuel N. Moore (DD-747) and in October 1967 was detached to attend the Navy Management Course at the Naval Postgraduate School, Monterey, California. As a quantitative analysis major, he did extensive research on the solution of naval administrative problems through technology. He received his Master of Science degree in Management in June 1969. In August of that year he reported as Aide and Flag Secretary to the Commander SIXTH Fleet and is entitled to the Ribbon for the Meritorious Unit Citation awarded that command.

In addition to the Bronze Star Medal with Combat “V”, the NavyUnit Commendation Ribbon and the Meritorious Unit Commendation Ribbon, Commander Elpers has the Combat Action Ribbon; National Defense Service Medal with bronze star; Armed Force Expeditionary Medal and the Vietnam Service Medal with five stars. From the Republic of Vietnam he has received the Navy Distinguished Service Order, Second Class, the Armed Forces Honor Medal, First Class and the Republic of Vietnam Campaign Medal with Device.