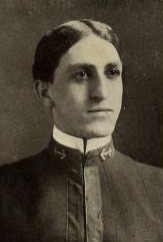 Rear Admiral Chantry, born in Malvern, Iowa, April 15, 1883, attended the public schools of Malvern, where he was graduated number on in his class at the age of sixteen and chosen Valedictorian. He was appointed to the US Naval Academy, Annapolis, Maryland, from his native state in 1902. While a Midshipman he was third in his class as a fourth year man, and first the last three years. Graduated with distinction, first in a class of 115, he served the two years at sea the required by law to the Construction Corps as a Naval Constructor, with the rank of Lieutenant (junior grade) October 30, 1908, he subsequently progressed in grade to Lieutenant, March 4, 1911; Lieutenant Commander, May 23, 1917; received temporary promotion to Commander, during the World War and was commissioned in that rank December 31, 1921; and Captain, February 1, 1932. He was promoted to Rear Admiral, October 1, 1938, and in that rank was transferred to the Line of the Navy.

After graduation in February 1906, Rear Admiral Chantry cruised to Asiatic Station, joining the USS Wisconsin in April and the USS Raleigh the following August, serving in that cruiser operating with Pacific Fleet until October 1907. Later that month he was transferred to the USS Milwaukee, serving in that cruiser until January 1908. The two succeeding years he had instruction in Naval Architecture, at the Navy Yard, Boston, Massachusetts, and at the Massachusetts Institute of Technology, Cambridge, Massachusetts, receiving the degree of Master of Science in February 1910. Later that month he reported for duty at the Navy Yard, Norfolk, Virginia, serving until June 1914 when he was appointed Assistant to the Superintendent Constructor, New York Shipbuilding Company, Camden, New Jersey. Detached from that assignment in December 1916 he served until July 1922 in the Hill Division, Navy Yard, Philadelphia, Pennsylvania, and during the World war held the post of Production Superintendent at that Navy yard. From July 1922 until August of the following year he had duty in the Production Department and later served as Production Superintendent, at the Navy Yard, Boston, Massachusetts.

The succeeding four years Rear Admiral Chantry served as head of the Department of Mathematics, Navy Academy, Annapolis, Maryland. In September 1927 he returned to sea as aide and fleet constructor consecutively on the staffs of Admiral Louis de Steiguer, U.S.N., later Admiral William V. Pratt, U.S.N, Commander in Chief, Battle Fleet, USS California flagship, serving in that assignment until May 1929. The six succeeding years he served as assistant, later Head of the Division of Design and Construction, Bureau of Construction and Repair (now Bureau of Ships), Navy Department, Washington, DC, and in that assignment supervised work involving the design and construction of our modern fleet.

Rear Admiral Chantry had instruction at the Naval War College, Newport, Rhode Island, completing the senior course in June 1936. He then returned to Washington, DC, to serve again as Head of the Division of Design and Repair, Bureau of Construction and Repair Navy Department. In September 1939, at the outbreak of the War in Europe and the declaration of a state of emergency in this country, he reported for duty as Manager of the Industrial Department, Navy Yard, Philadelphia, Pennsylvania. As Manager of that Industrial Department, during an era of great expansion, and during a huge work program of new construction of many types of naval vessels, he directed the design, construction of the battleships, Washington, New Jersey, and Wisconsin: the carriers, Antietam, Princeton and Valley Forge; and the heavy cruiser, Chicago and Los Angeles. For this service he was awarded the Legion of Merit with the following citation:

“For exceptionally meritorious conduct in the performance of outstanding services to the Government of the United States as Industrial Manager, Navy Yard, Philadelphia, from the outbreak of hostilities until October 1945. Personally responsible for planning and supervising industrial operations in the construction, conversion and overhauling of approximately 1300 war ships of varied types, Rear Admiral Chantry was charged with commissioning, outfitting and the post-shake-down overhaul of all naval vessels built in the private yards of the Delaware River and with the procuring of tools, buildings and additional facilities essential to rapidly expanding working force of 42,000 persons at th peak of wartime production. A leader of vision, exceptionally technical knowledge and sound judgement, he quickly achieved coordination in a command of primary importance in war production. His unwavering devotion to duty and inspiring leadership reflect the highest credit upon Rear Admiral Chantry and the United States Naval Service.”

Rear Admiral Chantry was relived of all active duty in December 1945 pending retirement. He was placed on the retired List of the Navy in the rank of Rear Admiral on April 11, 1946.

In addition to the Legion of Merit, Rear Admiral Chantry has the Victory Medal and is entitled to the American Defense Service Medal, the American Area Campaign Medal, and the World War II Victory Medal. He was made a Grand Officer, Order of the Southern Cross, by the Government of Brazil.