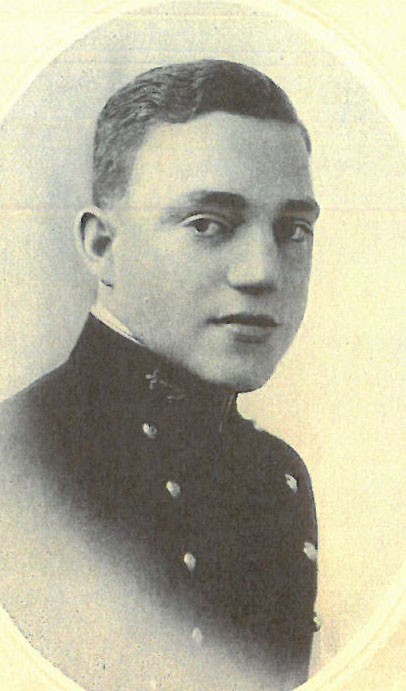 Charles Adams Baker, born in Lynchburg, Virginia, September 27, 1893, was appointed to the US Naval Academy from the Sixth District of Virginia in 1912. Graduated and commissioned Ensign in June, 1916 he progressed in grade until his promotion to Captain, December 8, 1941. He was transferred to the Retired List of the Navy in the rank of Rear Admiral, effective June 30, 1949.

When detached from the Naval Academy in 1916, he served in USS Vermont and USS Tacoma until August, 1917. He was then assigned to the Naval Torpedo Station, Newport, Rhode Island, for instruction. Upon completion of this course, he assisted in fitting out USS Gregory at Quincy, Massachusetts, and served in that destroyer from her commissioning, June 18, 1918, until December 1919. He was then ordered to the Naval Training Station, Newport, Rhode Island, for duty in connection with assembling and training the crew for USS Tennessee. He served in that battleship from her commissioning June 3, 1920 until the summer of 1922.

Returned to the Naval Academy in September, 1922, he served as Instructor in the Department of Seamanship until June, 1924. He joined USS Antares and two years later transferred to USS Smith Thompson as Executive Officer, and in that vessel he participated in the Second Nicaraguan Campaign. When detached in January, 1928, he assumed command of USS Tracy. The following May he reported for duty in the Bureau of Navigation (now Bureau of Naval Personnel), Navy Department, Washington, DC, and served in that bureau until the summer of 1930. The three succeeding years he served as Gunnery Officer of USS Richmond, cruiser, and returned to duty at the Navy Department, Navy Yard Division in March, 1933.

He commanded the destroyer Edsall, of Destroyer Division 14, US Asiatic Fleet, from June, 1935 until August, 1937, and the following three years he served on the General Board, Navy Department. He returned to sea duty in July, 1940 as Executive Officer of USS Maryland. In May, 1941 he was designated Assistant Naval Attache American Embassy, London, England, (title changed to Special Naval Observer), and after one year of duty there, he returned home in May, 1942 and had duty at the Naval War College, Newport, Rhode Island until November of that year. Returning to the Navy Department at that time, he reported for duty in the Office of the Chief of Naval Operations.

On March 10, 1944 he assumed command of USS Texas, famous old battleship, commissioned in 1914. Under his command the Texas was flagship of Commander Battleship Division FIVE, and participated in action against the enemy in both the Atlantic and Pacific oceans during World War II. He was awarded the Silver Star Medal “For meritorious performance of duty as Commanding Officer of the USS Texas during the amphibious assault on Normandy, France, on June 6, 1944, and the bombardment of heavily casemated enemy installations at Cherbourg, France, June 25, 1944…” He also was awarded the Bronze Star Medal, “For meritorious achievement..during the Amphibious Invasion of Southern France on August 15-16, 1944….By his professional skill and aggressive actions, he contributed directly to the successful landing of the Allied assault forces -- and to the rapid extension of the initial beachhead…”

The Government of France awarded him the Croix de Guerre with Silver Star for his services during this period.

In recognition of his service in command of the Texas during the invasion of France, he was made an honorary citizen of the State of Texas by the Governor of that State on July 25, 1944.

Brining the Texas back to the United States in the fall of 1944 for repairs and refitting at the Brooklyn Navy Yard, New York, he then took her to the Pacific to fight the war with Japan. For his part in the winning of the Pacific, he was awarded the Legion of Merit and cited “For exceptionally meritorious conduct in the performance of outstanding services…as Commanding Officer of the USS Texas, during operations against enemy Japanese forces at Iwo Jima, Ryukus, from February 16 to March 7, and at Okinawa, Volcano Islands, from March 25 to April 30, 1945….By his skill and courage he contributed directly to the successful assault and seizure of these strategic island bases…”

The end of hostilities also found the Texas with a distinguished battle record, and upon her decommissioning she was presented to the State of Texas for use as an historical relic. When relieved of command of that battleship in August, 1945, Rear Admiral Baker had brief duty in the Twelfth Naval District, San Francisco, California, followed by a tour in the Bureau of Naval Personnel, Navy Department, until March, 1947 when named a member of the Facilities Review Staff, Material Division, Office of the Assistant Secretary of the Navy. The following August, he was designated Deputy Chief, Material Control Policy Branch of that Division, and was so serving when relieved of all active duty pending his retirement on June 30, 1949.