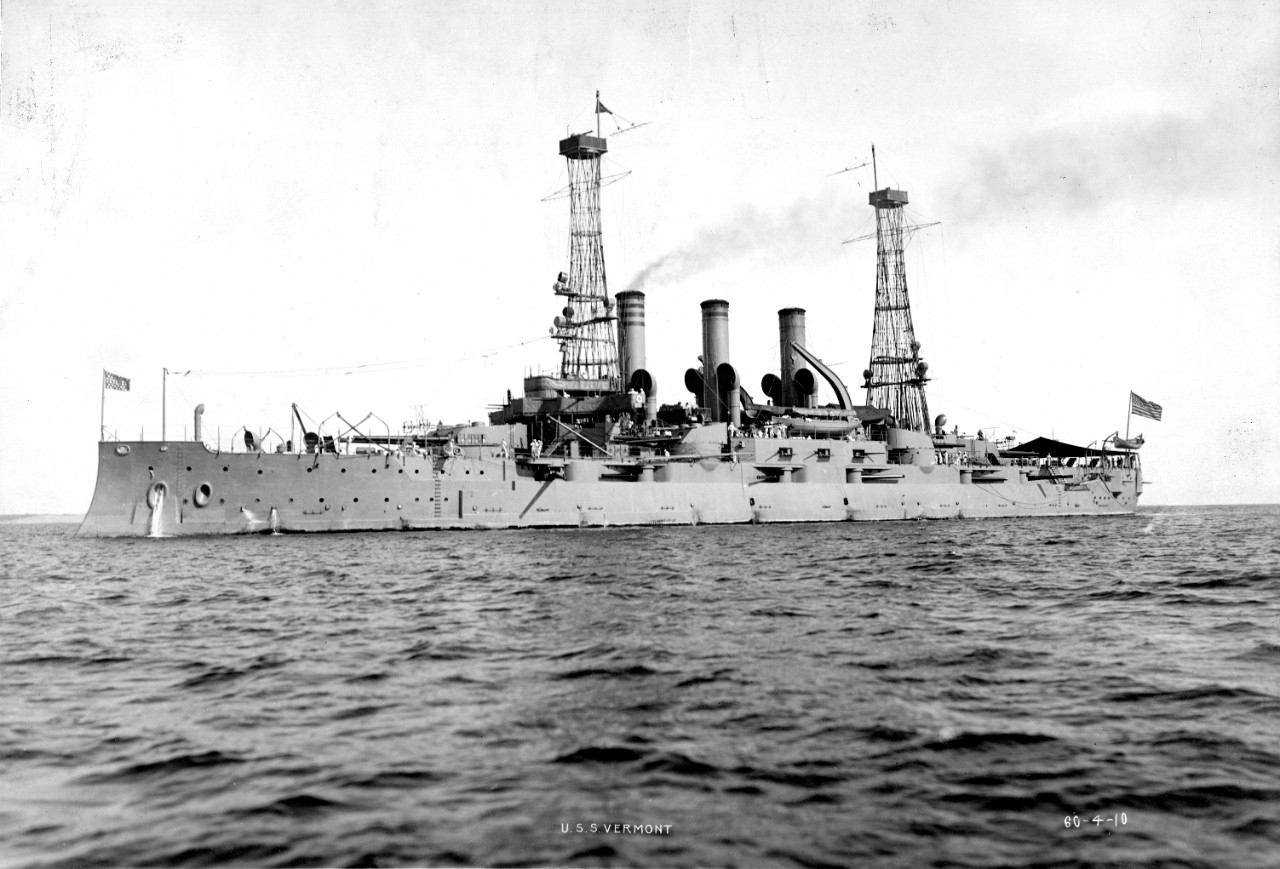 Vermont, the 14th state, was admitted to the Union on 4 March 1791. She was the first to enter after the ratification of the Constitution by all 13 of the original states. The name Vermont is a French term, meaning "green mountains" and was first used by the French explorer Samuel de Champlain in 1612 to describe the area east of Lake Champlain.

The second Vermont (Battleship No. 20) was laid down on 21 May 1904 at Quincy, Mass., by the Fore River Shipbuilding Co.; launched on 31 August 1905; sponsored by Miss Jennie Bell, the daughter of Governor Charles J. Bell of Vermont; and commissioned at the Boston Navy Yard on 4 March 1907, Capt. William P. Potter in command.

After her "shaking down" cruise off the eastern seaboard between Boston and Hampton Roads, Va., Vermont participated in maneuvers with the 1st Division of the Atlantic Fleet and, later, with the 1st and 2d Squadrons. Making a final trial trip between Hampton Roads and Provincetown, Mass., between 30 August and 5 September, Vermont arrived at the Boston Navy Yard on 7 September and underwent repairs until late in November 1907.

Departing Boston on 30 November, she coaled at Bradford, R.I.; received "mine outfits and stores" at Newport, R.L; and picked up ammunition at Tompkinsville, Staten Island, N.Y.; and arrived at Hampton Roads on 8 December.

There, she made final preparations for the globe-girdling cruise of the United States Atlantic Fleet. Nicknamed the "Great White Fleet" because of the white and spar color of their paint schemes, the 16 pre-dreadnought battleships sailed from Hampton Roads on 16 December, standing out to sea under the gaze of President Theodore Roosevelt who had dispatched the ships around the globe as a dramatic gesture toward Japan, a growing power on the world stage.

Vermont sailed as a unit of the 1st Division, under the overall command of Rear Admiral Robley D. "Fighting Bob" Evans, who was concurrently the Commander in Chief of the Fleet. Over the ensuing months, the battleship visited ports in Chile, Peru, Mexico, California, Hawaii, New Zealand, Australia, the Philippines, Japan, China, and in the Mediterranean, before she returned to Hampton Roads, again passing in review before President Roosevelt, on Washington's Birthday, 22 February 1909. During the voyage, Vermont's commanding officer, Capt. Potter, was advanced to flag rank and took command of the division; his place was taken by Capt. (later Admiral) Frank Friday Fletcher.

Following her return to the United States, Vermont underwent repairs at the Boston Navy Yard from 9 March to 23 June and then rejoined the fleet off Provincetown. She subsequently spent the 4th of July at Boston as part of the 1st Division of the Fleet before spending nearly a month, from 7 July to 4 August, in exercises with the Atlantic Fleet. Subsequently coaling at Hampton Roads, the battleship conducted target practice off the Virginia capes in the operating area known as the Southern Drill Grounds.

For the remainder of 1909, Vermont continued maneuvers and exercises, broken by visits to Stamford, Conn., for Columbus Day festivities and to New York City for the observances of the Hudson-Fulton Celebration from 22 September to 9 October. She spent the Christmas holidays at New York City, anchored in the North River.

The battleship then moved south for the winter, reaching Guantanamo Bay on 12 January 1910. For the next two months, she exercised in those Caribbean climes, returning to Hampton Roads and the Virginia capes for elementary target practice that spring. Ultimately reaching Boston on 29 April, the battleship underwent repairs at that yard through mid-July, before embarking members of the Naval Militia at Boston for operations between that port and Provincetown from 22 to 31 July.

Vermont subsequently visited Newport and then sailed for Hampton Roads on 22 August, where she then prepared for target practices between 25 and 27 September, before visiting New York City with other ships of the Atlantic Fleet.

After minor repairs at the Philadelphia Navy Yard, the battleship sailed for European waters on 1 November. Reaching the British Isles a little over two weeks later, Vermont, with other units of the 3d Division, Atlantic Fleet, visited Gravesend, England, from 16 November to 7 December and then called at Brest, France, where she remained until heading for the West Indies on 30 December.

Vermont engaged in winter maneuvers and drills out of Guantanamo Bay, Cuba, from 13 January 1911 to 13 March, before sailing for Hampton Roads. In the ensuing weeks, the battleship operated in the Southern Drill Grounds and off Tangier Island in the Chesapeake Bay, where she conducted target practice. After dropping off target materials at Hampton Roads on 8 April, Vermont sailed later that day for Philadelphia where she arrived on 10 April and entered drydock.

Later in the spring, Vermont resumed her operations with the other pre-dreadnought battleships of the 3d Division. She operated off Pensacola, Fla., and ranged into the Gulf of Mexico, calling at Galveston, Tex., from 7 to 12 June before returning to Pensacola on 13 June for provisions.

Shifting northward to Bar Harbor, Maine, Vermont spent the 4th of July there before she drilled and exercised with the Fleet in Cape Cod Bay and off Provincetown. The battleship then operated off the New England seaboard through mid-August, breaking her periods at sea with a port visit to Salem and alterations at the Boston Navy Yard. She then shifted south to conduct experimental gunnery firings and autumn target practice in the regions from Tangier Sound to the Southern Drill Grounds.

After repairs at the Norfolk Navy Yard from 12 September to 9 October, Vermont rejoined the Fleet at Hampton Roads before participating in the naval review in the North River, at New York City, between 24 October and 2 November. She then maneuvered and exercised with the 1st Squadron of the Fleet before returning to Hampton Roads.

Touching briefly at Tompkinsville on 7 and 8 December, Vermont reached the New York Navy Yard on the latter day for year-end leave and upkeep and remained there until 2 January 1912, when she sailed for the Caribbean and the annual winter maneuvers. She operated in Cuban waters, out of Guantanamo Bay and off Cape Cruz, until 9 March, when she sailed for the Norfolk Navy Yard and an overhaul that lasted into the autumn.

She departed Norfolk on 8 October and reached New York City on the 10th. She participated in the naval review at that port from 10 to 15 October before embarking Commander, 2d Division, Atlantic Fleet, at Hampton Roads between 16 and 18 October.

Vermont subsequently worked out of Hampton Roads, in the Virginia capes-Southern Drill Grounds area, into December. During that time, she conducted target practices and twice participated in humanitarian deeds, searching for the stranded steamship SS Nomega on 2 November and assisting the submarine B-2 (Submarine No. 11) between 13 and 15 December.

The battleship spent Christmas 1912 at the Norfolk Navy Yard before steaming for Cuba and winter maneuvers. En route, she visited Colon, Panama, a terminus of the nearly completed Panama Canal, and reached Guantanamo Bay on 19 January 1913. She subsequently operated out of Guantanamo and Guayan-canabo Bay until sailing for Mexican waters on 12 February.

Vermont arrived at Vera Cruz on the 17th and remained at that port into the spring, protecting American interests until 29 April, when she sailed north to rejoin the fleet in Hampton Roads. The battleship conducted one midshipman's training cruise that summer, embarking the midshipmen at Annapolis on 6 June. After rejoining the fleet, Vermont cruised in Block Island Sound and visited Newport.

The battleship then received her regular overhaul at Norfolk from July into October before she conducted target practice off the Southern Drill Grounds. Vermont then made her second European cruise, departing Hampton Roads for French waters on 25 October, reaching Marseilles on 8 November. Ultimately departing that Mediterranean port, on 1 December, Vermont reached the Norfolk Navy Yard five days before Christmas, making port on the end of a towline because of storm damage to a propeller. 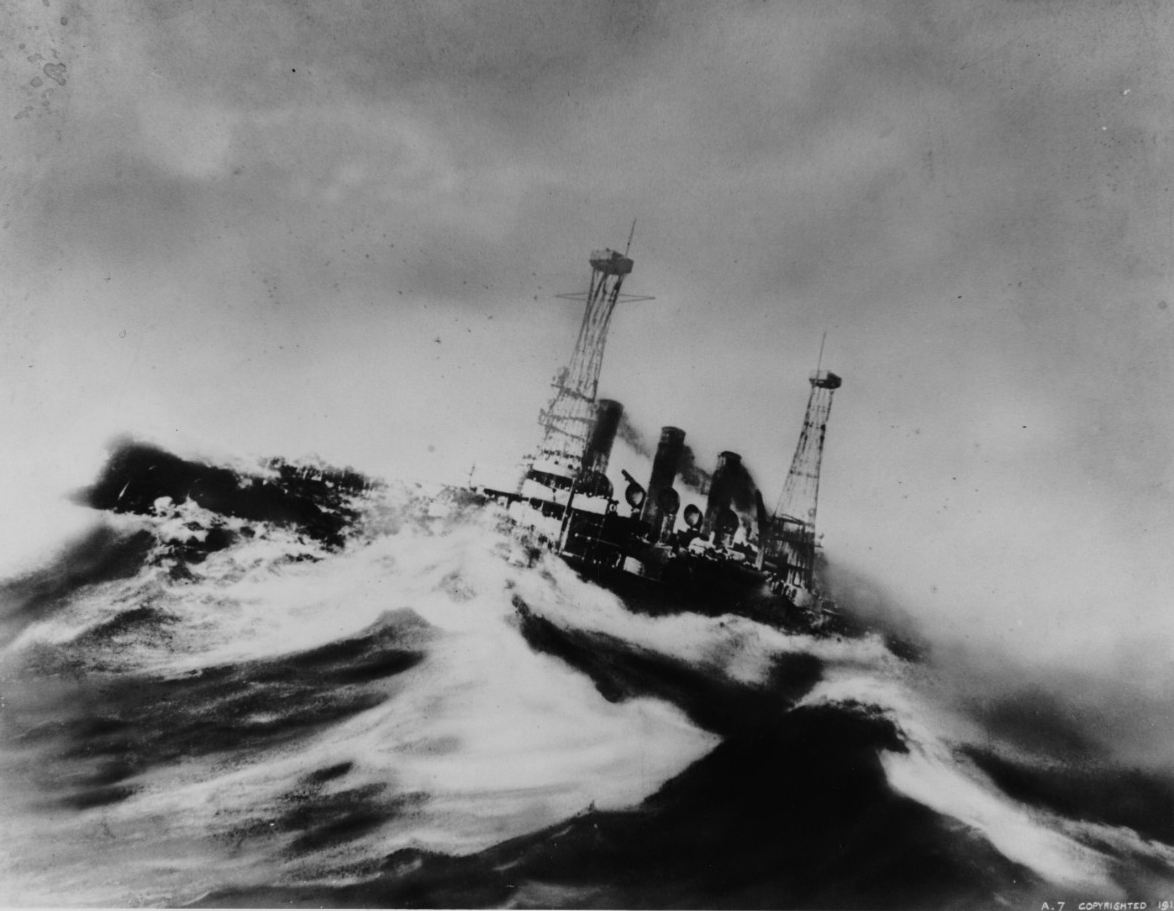 Vermont (BB-20) in December 1913. As part of the Atlantic Fleet, she was returning from the Mediterranean and broke both propeller shafts and had to be towed into port at Norfolk, Virginia. Naval History and Heritage Command photograph, NH 80389.

Soon after she had completed her post-repair trials and had begun preparations for the spring target practice with the Fleet in the Southern Drill Grounds, tension in Mexico beckoned the battleship. Departing Hampton Roads on 15 April, Vermont reached Vera Cruz very early in the morning of 22 April in company with Arkansas (Battleship No. 33), New Hampshire (Battleship No. 25), South Carolina (Battleship No. 26), and New Jersey (Battleship No. 16). Her landing force, a "battalion" of 12 officers and 308 men, went ashore after daybreak that same day as United States forces occupied the port to block an arms shipment to the dictator Victoriano Huerta. In the fighting that ensued, two officers from the staff were awarded Medals of Honor: Lt. Julius C. Townsend, the battalion commander, and Surgeon Gary DeV. Lanehornes, the regimental surgeon of the 2d Seaman Regiment. During the fighting, Vermont's force suffered one fatality, a private from her Marine detachment, killed on the 23d. But for a visit to Tampico, Mex., from 21 September to 10 October, Vermont remained in that Mexican port into later October.

Over the next two and one-half years, Vermont maintained her schedule of operations off the eastern seaboard of the United States, ranging from Newport to Guantanamo Bay, before she lay in reserve at Philadelphia from 1 October to 21 November 1916. Vermont subsequently supported the Marine Corps Expeditionary Force in Haiti from 29 November 1916 to 5 February 1917 and then conducted battle practices out of Guantanamo Bay. She ultimately returned to Norfolk on 29 March 1917.

On 4 April 1917, Vermont entered the Philadelphia Navy Yard for repairs. Two days later, the United States declared war on Germany. The battleship emerged from the yard on 26 August 1917 and sailed for Hampton Roads for duty as an engineering training ship in the Chesapeake Bay region. She performed that vital function for almost the entire duration of hostilities, completing the assignment on 4 November 1918, a week before the armistice stilled the guns of World War I.

Her service as a training ship during the conflict had been broken once in the spring of 1918 when she received the body of the late Chilean ambassador to the United States on 28 May 1918; embarked the American Ambassador to Chile, the Honorable J. H. Shea, on 3 June; and got underway from Norfolk later that day. The battleship transited the Panama Canal on the 10th; touched at Port Tongoi, Chile, on the 24th; and arrived at Valparaiso on the morning of 27 June.

There, the late ambassador's remains were accompanied ashore by Admiral William B. Caperton and Ambassador Shea. Departing that port on 2 July, Vermont visited Callao, Peru, on the 7th, before retransiting the Panama Canal and returning to her base in the York River.

Vermont entered the Philadelphia Navy Yard on 5 November and was there converted to a troop transport. She subsequently sailed from Norfolk on 9 January 1919 on the first of four round-trip voyages, returning "Doughboys" from "over there." During her time as a transport, the battleship carried some 5,000 troops back to the United States, completing her last voyage on 20 June 1919.

Prepared at the Philadelphia Navy Yard for inactivation, Vermont departed the east coast on 18 July, sailing from Hampton Roads on that day, bound for the west coast. After transiting the Panama Canal, the battleship visited San Diego, San Pedro, Monterey, and Long Beach, Calif.; Astoria, Oreg.; and San Francisco, Calif., before reaching the Mare Island Navy Yard, Vallejo, Calif., on 18 September. There, the battleship was decommissioned on 30 June 1920. She was subsequently reclassified as BB-20 on 17 July of that same year.

Vermont remained inactive at Mare Island until her name was struck from the Navy list on 10 November 1923. She was then sold for scrapping on 30 November of the same year in accordance with the Washington Treaty limiting naval armaments.