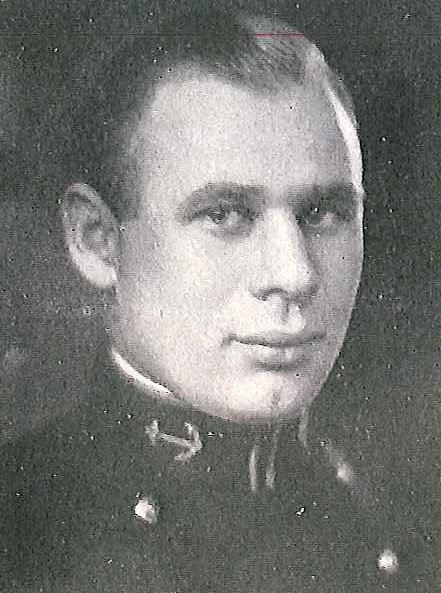 Captain Benson was born on January 30, 1902, at Halethorpe, Maryland, son of the late Carville Dickenson Benson and Mrs. Harriette Cassard Miller Benson. He was graduated from the Baltimore Polytechnic Institute, Baltimore, Maryland, in 1920 and attended Johns Hopkins University for a year before entering the United States Naval Academy, Annapolis, Maryland, on June 24, 1921, upon appointment from West Virginia.

As a Midshipman, he won the block “N” in Soccer. Graduated with distinction, being sixth in his class of 448, he was commissioned Ensign to rank from June 4, 1925. He subsequently progressed through the grades until his promotion to Captain to rank from June 20, 1943.

Following graduation in June, 1925, Captain Benson was assigned to USS Texas for brief duty in that battleship, operating with Scouting Fleet, and later that year was transferred to USS Arizona, a unit of Division 3, Battle Fleet. He served aboard the Arizona until the spring of 1929 when he reported for duty in USS Burns, operating with Division 2, Mine Squadron 2, Fleet Base Force, based at Pearl Harbor, TH. In 1930 he was transferred to USS Ramsey, also at Pearl Harbor with Mine Squadron 1, US Fleet, this duty completing six years’ consecutive service afloat.

In June, 1931, Captain Benson returned to Annapolis, Maryland, for instruction in Ordnance Engineering (general), and continued instruction from June, 1933, until June, 1934, at the Navy Yard, Washington, DC. He next had service aboard USS Idaho, while that battleship was undergoing modernization at Norfolk, Virginia, and after she was re-commissioned for operation with Battleship Division 3, Battle Force.

Detached from the Idaho in the summer of 1937, Captain Benson became Assistant to the Naval Inspector of Ordnance at the Ford Instrument Company, Long Island City, Long Island, New York, and served in that capacity until July, 1939, when he reported for eighteen months duty in China aboard USS Augusta, operating with the Asiatic Fleet. During that time he participated in operations in China. He continued to serve as gunnery officer of the Augusta after her overhaul at the Mare Island Navy Yard, December, 1940 to April, 1941, after which she became the flagship of Admiral (now Fleet Admiral) Ernest J. King, USN, Commander in Chief, Atlantic Fleet.

Captain Benson was aboard the Augusta during the journey of President Franklin D. Roosevelt to meet British Prime Minister Winston Churchill at Placentia Bay, Newfoundland, for the Atlantic Charter discussions; when trips were made by Secretary of the Navy Frank Knox and Secretary of the Treasury Henry Morganthau, Jr. to Bermuda; and after war was declared by the United States upon Japan, Germany, and Italy on December 8, 1941, when the Augusta, then flagship of Admiral R. E. Ingersoll, USN, the Commander in Chief, Atlantic Fleet, joined a carrier task force operating from Bermuda.

Detached from the Augusta in June, 1942, Captain Benson reported to the US Naval Proving Ground, Dahlgren, Virginia, where he had duty until December 1944. On January 25, 1945, he assumed command of USS George Clymer (APA 27), veteran attack transport, in time for her sixth and final operation – the assault and occupation of western beaches of Okinawa in April, 1945. Captain Benson remained in command of the George Clymer after the cessation of hostilities, until relieved on March 8, 1946 with orders to the Bureau of Ordnance, Navy Department, Washington, DC.

On April 15, 1946, Captain Benson reported for duty as Ordnance Officer of the Naval Proving Ground, Dahlgren, Virginia, an activity maintained by the Bureau of Ordnance for testing of guns, projectiles ammunition, armor, and other ordnance material sent to the Fleet. All tests and experiments there are conducted under the supervision of Captain Benson.