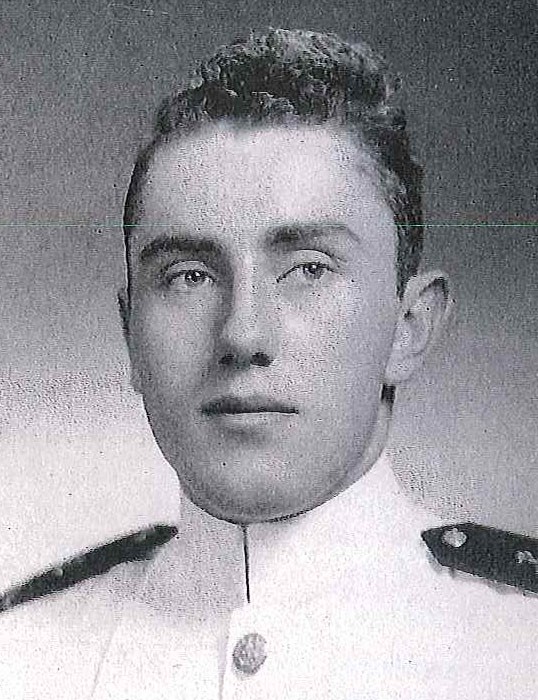 Sylvester Robert Foley, Jr. was born in Manchester, New Hampshire, on September 19, 1928, son of Commander S. R. Foley, USN, Retired and Mrs. (Gladys Cameron) Foley. He attended Admiral Farragut Academy, Pine Beach, New Jersey, prior to entering the US Naval Academy, Annapolis, Maryland, on appointment from his native state in 1946. Graduated and commissioned Ensign on June 2, 1950, he subsequently advanced in rank to that of Captain, to date from November 1, 1970. His selection for the rank of Rear Admiral was approved by the President on January 30, 1974.

Following graduation from the Naval Academy in 1950, he remained there as an Instructor until September of that year. He next had flight training and on January 23, 1952 was designated Naval Aviator. He continued training until September of that year, then joined Composite Squadron Four to serve as Night Fighter and Special Weapons Pilot, participating in Western Pacific and Mediterranean deployments. In June 1956 he returned to the Naval Academy, where he had duty as an Instructor in the Department of Seamanship and Navigation until June 1959. Completing a tour with Attack Squadron Thirty-six, he reported in June 1961 for instruction at the Naval War College, Newport, Rhode Island.

In June 1962 he joined the Staff of the Commander in Chief, US Naval Forces, Europe as Aviation Readiness and Training Officer, headquartered in London, England. While there he completed the basic airborne training (Paratrooper) with the US Army Special Forcesin 1963. From April to September 1965 he had training as a Prospective Executive Officer with Replacement Carrier Air Wing Four, after which he served as Executive Officer of Attack Squadron One Hundred Six. He assumed command of that squadron in June 1966. While attached to Scouting Squadron One Hundred Six, he participated in combat in the Western Pacific, operating from USS Forrestal and the squadron was awarded the Naval Air Force, US Atlantic Fleet “E”. He was personally awarded the Air Medal with Numeral One to represent one strike/flight award and the Navy Commendation Medal. The citations follow in part:

Air Medal: “For meritorious achievement . . . while attached to Attack Squadron One Hundred Six embarked in USS Forrestal (CVA-59) from July 25 to July 29, 1967 and Attack Carrier Air Wing Ten embarked in USS Intrepid (CVS-11) from September 17 to September 18, 1968 engaged in combat operations against the enemy in Southeast Asia . . .”

In June 1967 he reported for instruction at the Air War College, Maxwell Air Force Base, Alabama and in June 1968 was graduated with distinction. While there he received the degree of Master of Science in International Affairs from George Washington University, Washington, DC, in 1968. He next had Prospective Commander Carrier Air Wing training with Replacement Carrier Air Wing Twelve and in October 1968 assumed command of Carrier Air Wing Eleven, which operated off the USS Kitty Hawk in the Vietnam combat area. He was awarded the Bronze Star Medal, the Distinguished Flying Cross and a Gold Star in lieu of the Second Navy Commendation Ribbon with Combat “V”. The citations follow in part:

Bronze Star Medal: “For meritorious service . . . from January 28 to August 17, 1969 . . . His imaginative and resourceful participation in combat strike planning, weaponeering and airborne operations contributed immeasurably to the development of optimum tactics utilized in all strikes . . .”

Distinguished Flying Cross:   “For heroism and extraordinary achievement . . . as Commander of Attack Carrier Air Wing Eleven . . . On May 2, 1969, Commander Foley led a highly successful strike against a heavily defended storage area in Southeast Asia. When his section leader’s aircraft was hit by enemy fire forcing the pilot to eject, Commander Foley disregarded his personal safety to prevent the capture and insure the rescue of the downed aviator. Although under enemy fire, he descended and pinpointed the pilot’s location in a densely wooded area. He ignored a warning to clear the area because of an impending bombing raid, disregarded the approaching darkness and his own critically low aircraft fuel state and remained over the pilot, strafing enemy positions, until he was able to direct the rescue helicopter to a successful pickup. . .”

Gold Star in lieu of the Second Navy Commendation Medal:  “. . . On July 7, 1969, Commander Foley was the flight leader of a four plane division of strike aircraft assigned to attack a vital enemy infiltration route in South Vietnam. Since severe weather conditions in the vicinity of the assigned target prevented the prosecution of an attack, he requested and received an alternate target consisting of a defended enemy troop concentration providing opposition to allied ground forces. Despite accurate and intense anti-aircraft fire, he made repeated bombing attacks delivering all bombs on target. Locating the position of an enemy gun emplacement near the enemy camp, he commenced a strafing attack silencing the enemy anti-aircraft fire . . .”

He is also entitled to the Ribbon for the Navy Unit Commendation awarded the USS Kitty Hawk.

Assigned in October 1969 to the Office of the Chief of Naval Operations, Navy Department, Washington, DC, he served on the Air Weapons Systems Analysis Staff and as Tactical Aircraft Plans Officer. He remained there until June 1971 and in August of that year assumed command of USS Coronado (LPD-11). He was awarded the Meritorious Service Medal and cited in part as follows:

“For outstanding meritorious service . . . from September 30, 1971 to March 5, 1972. Captain Foley’s superb performance of duty during this period contributed directly to the magnificent reputation which the Amphibious Task Force established during the deployment with the Sixth Fleet . . . He successfully conducted an underway launch of LVT vehicles during Deep Furrow and carried out at Crete the first combined simultaneous amphibious assault and helo minesweeping operation in the history of the Navy and participated in the difficult night landing at Carboneras . . .”

In July 1972 he transferred to command of USS Midway (CVA-41) and “for exceptionally meritorious conduct . . . (in that capacity) from July 31, 1972 to February 9, 1973 and Commander Task Group 77.3 from November 28, 1972 to February 9, 1973, during intensive combat operations against the enemy . . .” he was awarded the Legion of Merit. The citation further states in part:  “Displaying superior initiative, imagination and perseverance, Captain Foley provided guidance and inspiration to the Midway/Carrier Air Wing Five team that resulted in distinguished and highly effective combat results across the complete spectrum of aerial warfare operations. . .”

He reported in September 1973 as Chief of Staff to Commander Seventh Fleet.

Captain Foley is a Past President of Toastmasters International and a member of the U. S. Naval Institute.