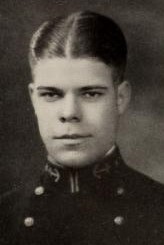 A specialist in ordnance, Griswold Terry Atkins graduated from the Naval Academy with the Class of 1930 and between 1936 and 1939 attended the course in ordnance engineering at the Naval Postgraduate School. In the interim he had duty afloat in the battleship Maryland and Colorado and in the destroyer Whipple.

In the summer of 1939 he joined the battleship Tennessee, which was tied up in “battleship row” at Ford Island, T.H., when the Japanese attacked the Naval Base, Pearl Harbor, on December 7, 1941. Far more fortunate than most of ships there, the Tennessee was damaged but was able to proceed, under her own power, to Bremerton, Washington, for repairs. In May 1942 he joined the newly-commissioned battleship Alabama, which had shakedown duty with the British Home Fleet at Scapa Flow, and in August 1943 reported as Plate Battery Officer at the Naval Proving Ground, Dahlgren, Virginia.

During 1946 and 1947 he had consecutive command of the attack cargo ships Prentiss and Rankin, after which he had duty as Head of the Armor, Projectiles, Bombs, Rockets, Warheads and Ballistics Section in the Bureau of Ordnance. He was Ordnance and Gunnery Officer of the staff of Commander Service Force, Pacific Fleet between 1950 and 1953, followed by an assignment as Chief of Staff, Aide and Operations Officers on the staff of Commander Cruiser Division 4.

For a year, 1954-1955, he commanded the destroyer tender Yellowstone and in October became Program Director (Ammunition) in the Planning and Progress Division, Bureau of Ordnance. In February 1958 he was ordered to duty as Commanding Officer of the Naval Powder Factory, Indian Head, Maryland and in August of the  same year was designated Commanding Officer of the Naval Propellant Plant, Indian Head.