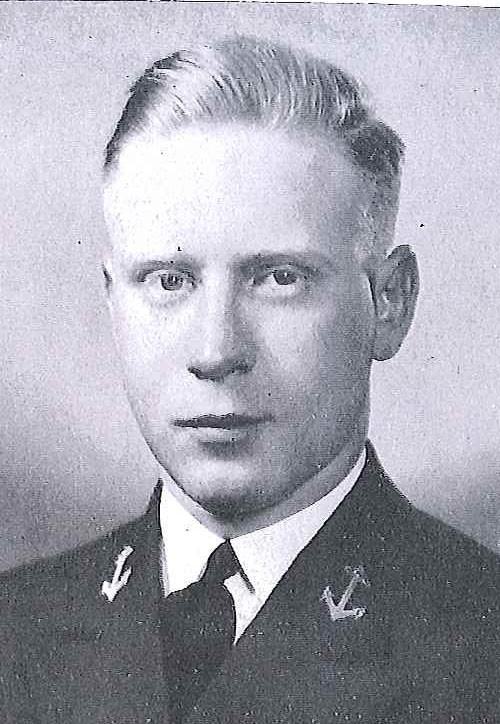 Donald G. Baer was born in Uniontown, Pennsylvania, on July 4, 1915, attended Bullis Preparatory School in Washington, DC, and entered the US Naval Academy, Annapolis, Maryland, on appointment from Pennsylvania.  As a Midshipman, he was a member of the Track Team for four years.  Graduated and commissioned Ensign on June 3, 1937, he subsequently advanced to the rank of Rear Admiral, to date from January 1, 1965.

After graduation from the Naval Academy, he was assigned to USS Oklahoma, in which he served as a junior officer from June 1937 until November 30, 1939.  He attended the Submarine School in New London, Connecticut from January to June 1940, then served in various capacities in USS S-20.  On April 25, 1941, he joined USS S-30 as Executive Officer and was serving in that capacity at the outbreak of World War II.  Detached on January 9, 1943, he served from February 27, that year, until May 26 of the next as Engineer Officer, later Executive Officer of USS Paddle.

He was awarded the Bronze Star Medal with Combat “V” and citation:  “For meritorious service as Assistant Approach Officer of the USS Paddle during the Third War Patrol of that vessel in enemy-controlled waters of the Southwest Pacific from March 19 to May 12, 1944.  Skilled in the performance of his duties, Lieutenant Commander Baer rendered invaluable assistance to his commanding officer in sinking two enemy ships and inflicting damage on a third…”

On August 16, 1944, he assumed command of USS Lapon which won the Navy Unit Commendation for heroic service in the Pacific.  He was personally awarded the Navy Cross.  “For extraordinary heroism as Commanding Officer of (that submarine) during her Sixth War Patrol in enemy Japanese-controlled waters in the South China Sea Area from September 4 to October 31, 1944.  The citation continues:  “Skillfully maneuvering his ship, Commander Baer conducted a series of three attacks upon heavily escorted enemy shipping convoys, which resulted in the sinking of four hostile vessels.  Although his submarine was subjected to severe depth charge attacks, often close to shore, he succeeded in bringing the Lapon safe to port…”

Completing his eleventh war patrol, three as Commanding Officer, he remained in command of the Lapon after the war until February 1, 1946, then, successively commanded USS Remora and USS Sea Cat.  Detached from the latter, he reported for duty on the Staff of Commander Submarine Squadron TWO as Engineering and Material Officer.  From June 6, 1948 to October 16, 1951, he had shore duty as Engineer and Repair Officer, and as War Plans Officer, at the Submarine Base, New London, and for a year thereafter was Executive officer of USS Orion, a submarine tender.  For a brief period, he served as Commanding Officer of the USS Orion.

He was Division Commander of Submarine Division SIXTY-THREE during the period November 6, 1952 to January 8, 1954, and on February 2, that year, reported to the Office of Chief of Naval Operations, Navy Department, Washington, DC, to serve as Material and Logistics Evaluator in the Progress Analysis Group.  He remained there until August 15, 1956, when he reported as a student at the Industrial College of the Armed Forces, Washington, DC.  He was graduated and was detached on June 12, 1957, and from July 3, that year until August 1958, he commanded USS Fulton (AS-11).  He next served in the Politico-Military Policy Division, Office of the Chief of Naval Operations until May 12, 1959, when he became a Special Assistant to the Chief of Naval Operations.  In October 2960, he assumed command of Submarine Squadron ONE, where he was responsible for the Regulus Missile Submarine in the Pacific.  He was Special Assistant to the Chief of Naval Personnel for Leadership, Navy Department from October 1961 to September 1963.

He then became Chief of Staff and Aide to the Deputy Commander Submarine Force, US Atlantic Fleet.  On May 28, 1964, he was selected for promotion to Rear Admiral and in August, that year assumed command of the US Naval Base, Subic Bay, Luzon, Philippine Islands.  “For exceptionally meritorious service…(in that capacity) from August 1964 to August 1966…” he was awarded the Legion of Merit.  The citation continues in part:  “Shortly after the Gulf of Tonkin incident, (he) was faced with the problem of indefinitely supporting the entire SEVENTH Fleet with facilities, money and personnel allowances designed to support only a small part of that Fleet…  He accomplished his difficult task and, at the same time, master=planned rehabilitation of existing and construction of new facilities.  With the complete support of all levels of the Department of Defense, he has transformed the US Naval Base Subic into an outstandingly effective Fleet Operating Base.  Through arduous perseverance he reclaimed from the jungle, a magnificent Fleet Rest and Recreation Area on Grande Island that is often utilized by SEVENTH Fleet ships visiting Subic Bay.  By his avowed dedication to the principles of civic action and his constant personal assistance in disaster areas and the initiation of a rehabilitation program which has aided displaced Negrito tribesman, Rear Admiral Baer has advanced Filipino-American relations to a new level…”

In September 1966, reported Commander Submarine Flotilla SIX and “for meritorious service from September 25, 1966 to October 30, 1967…” in that capacity, he was awarded the Navy Commendation Medal.  The citation further states in part:  “Rear Admiral Baer exercised military and operational command over a major portion of the Submarine Force, US Atlantic Fleet during a period of unprecedented growth.  In particular, he skillfully supervised the post-construction and post-overhaul pre-deployment training, Demonstration and Shakedown Operations (DASO), and tactical load-out periods for the Fleet Ballistic Missile Submarines,… (He) ensured the successful operation of two SSBN replenishment sites and the effective functioning of off-crew support operations at Charleston, South Carolina.  In the successful accomplishment of all his assigned duties, as well as the additional NATO duty of Commander Submarine Force, Eastern Atlantic Area (Designate), he demonstrated the finest degree of judgment and dedication, proving himself to be a most articulate and impressive spokeman for the Navy…”

In December 1967, he became Deputy Chief of Naval Material (Programs and Financial Management), Navy Department and “for exceptionally meritorious conduct…” in that capacity from December 1967 to June 1970 was awarded a Gold Star in lieu of the Second Legion of Merit.  The citation continues in part:

“…Rear Admiral Baer was the moving force in reshaping the overall financial control policies, practices and organizational patterns in the Naval Material Command in a turbulent and fast-changing financial situation resulting from ever-constricting budgets.  With prodigious and creative effort, he influenced the Navy to adopt a sounder basis for controlling more than half of the navy’s annual budget, which provided the material support to the Operating Forces of the Navy, including the efforts in Southeast Asia… (He) rendered valuable and distinguished service and contributed immeasurably to both the immediate and long-range material readiness of the Navy…”

He was transferred to the Retired List of the US Navy on July 1, 1970.