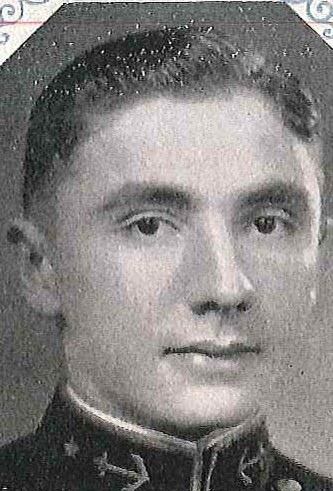 James Otis Biglow was born in New London, Ohio, on September 14, 1907, son of Ernest O. and Ida King Biglow. He was graduated from Culver Military Academy, Culver, Indiana, in 1925, and attended Ohio State University at Columbus for two years before entering the US Naval Academy, Annapolis, Maryland, on June 14, 1927. As a Midshipman he participated in Track. Graduated and commissioned Ensign on June 4, 1931, he subsequently advanced to the rank of Captain, his date of rank June 17, 1950.

After graduation in June 1931, he remained at the Naval Academy for the summer course in aviation, and in August of that year joined the battleship Arizona for service until January 1932. In March he reported to the Naval Air Station, Pensacola, for flight training, and was designated Naval Aviator on May 30, 1933. For three years thereafter he served aboard USS Tennessee with duty as a pilot in the aviation unit of that battleship, Observation Squadron 3B.

Leaving the Tennessee in June 1936, he reported the next month to Patrol Squadron 6F, at the Fleet Air Base, Pearl Harbor, TH, where he remained until May 1937. In June he returned to Annapolis for instruction in Aeronautical Engineering at the Postgraduate School continuing the course at the Naval Aircraft Factory, Philadelphia, Pennsylvania (May to July 1939), and at the California Institute of Technology, Pasadena, California, from which he received the Master of Science degree in June 1940.

His next duty was aboard USS Lexington from July 1940 until September 1941, when he joined the staff of Commander Patrol Wing 2. He continued staff duty the early months of World War II, and in October 1942 assumed command of Headquarters Squadron 2. From November 1942 until February 1944 he served on the staff of Commander Air Force, Pacific Fleet. He was awarded the Bronze Star Medal for “meritorious service as Air Structural Officer for Patrol Type Aircraft on the Staff of Commander Air Force, US Pacific Fleet, in connection with operations against enemy Japanese forces in the Pacific War Area from November 1942 until February 1944…”

He also received a Letter of Commendation from the Commander, Air Force, Pacific, for “outstanding service and meritorious achievement in line of his profession as Officer in charge of Multi-engine Patrol and Bombing Aircraft, Transport and Utility Aircraft, Seaplanes and Training Aircraft, on the staff of Commander Air Force, US Pacific Fleet…”

Since February 1950 he has been stationed at the Naval Air Station, Corpus Christi, Texas, where he currently serves as Overhaul Repair Officer.