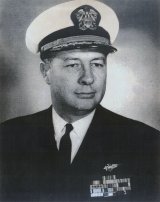 Forrest Silas Petersen was born in Holdrege, Nebraska on 16 May 1922, son of Elmer Louis and Stella B. (Nickels) Petersen. He attended the University of Nebraska at Lincoln for two years and in 1941 entered the US Naval Academy, Annapolis, Maryland, on appointment from the Fifth District of his native state. Graduated and commissioned Ensign on 7 June 1944, with the Class of 1945 (course of instruction reduced to three years due to World War II), he subsequently advanced in rank to that of Rear Admiral, to date from 1 October 1971.

Following graduation from the Naval Academy in 1944, he joined the Caperton and during the last year of the war saw action during operations in the Marianas and Western Carolines; at Leyte, Luzon and Okinawa Gunto and during the THIRD Fleet strikes against Japan. Detached from that destroyer in January 1946, he next had flight training at the Naval Air Station, Pensacola, Florida and on 14 June 1947 was designated Naval Aviator.

In November 1947 he was assigned to Fighter Squadron TWENTY-A (redesignated on 24 August 1948 Fighter Squadron ONE HUNDRED NINETY-TWO) and in August 1950 returned to Annapolis, Maryland, where he had instruction in aeronautical engineering at the Postgraduate School until June 1952. He continued his instruction at Princeton University, from which he received the degree of Master of Science in June 1953.

He served with Fighter Squadron FIFTY-ONE for three years and in July 1965 was assigned to the Naval Air Test Center, Patuxent River, Maryland, where he had test pilot training for six months, then had duty as a Flight Instructor (Test Pilot Training). He was detached in August 1958 and ordered to the Flight Research Center, NASA, at Edwards Air Force Base, Edwards, California, for preliminary training to qualify as a pilot for the X-15. (The X-15 is the North American experimental rocket plane designated to carry man for the first time to an altitude of two hundred miles.) For service in the X-15 flight program, during the period September 1960 to January 1962, he was awarded the National Aeronautics and Space Administration's Distinguished Service Medal, the National Society of Aerospace Professional's Montgomery Award and was joint recipient of the Collier Trophy, presented by President John F. Kennedy in 1962.

He was also awarded the Distinguished Flying Cross in June 1962, and cited as follow: "For exceptionally achievement in aerial flight, as a pilot of the X-15 research aircraft on five separate flights, he contributed materially in the obtaining of valuable information to be used in the design and operations of future aerospace vehicles..."

He was Executive Officer of the USS Enterprise (CVA(N)65) from February 1964 to April 1966. While serving in that capacity he was awarded the Bronze Star Medal and cited as follows: "For meritorious service as Executive Officer of USS Enterprise in connection with the combat deployment with the United States SEVENTH Fleet during Special Operations in the South China Sea..."

In May 1966 he became Assistant to the Director of Naval Program Planning, Office of the Chief of Naval Operations, Navy Department. For service in this capacity, he was awarded the Legion of Merit "for meritorious conduct as CNO Project Officer, Navy Interceptor Requirements Study, Deputy CNO Project Officer, Major Fleet Escort Force Level Study, Task Leader, Endurance Supplement to Major Fleet Escort Force Level Study from August 1966 to September 1967."

From November 1967 to December 1968 he commanded USS Bexar (APA-237) and was awarded the Navy Commendation Medal with Combat "V," for "...providing vital support by assisting in movement of men and equipment into and within the combat zone..." during the period 27 February to 6 September 1968. He next commanded the USS Enterprise (CVA(N)65) and in January 1972 reported as Assistant Director for Strategic and Support Systems Test and Evaluation, Office of the Director of Defense Research and Engineering, Office of the Secretary of Defense, Washington, DC. In May 1974 he was ordered detached for duty as Commander Attack Carrier Striking Force, SIXTH Fleet and Commander Carrier Group TWO. He was promoted to Vice Admiral on 1 May 1976 and retired from active duty in May 1980.

He is married to the former June Berkshire of Washington, DC and they have three children. He is a member of the Society of Experimental Test Pilots, National Society of Aerospace Professionals and the American Institute of Aeronautics-Astronautics.