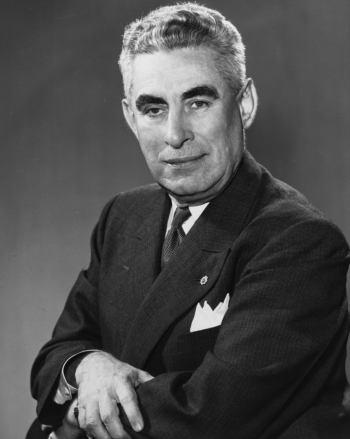 James Edward Van Zandt was born in Altoona, Pennsylvania, on 18 December 1898, son of James T. and Katherine Smith Van Zandt. He received his early education from Altoona public schools and the Pennsylvania Railroad Apprentice School, and was employed with that railroad from 1916 to 1938, except for a period during World War I in the US Navy. After his discharge in the rank of Chief Quartermaster in August 1919, he enrolled in the US Naval Reserve as Quartermaster, first class, in July 1921, and had the usual annual training periods at sea and ashore until June 1941, when he was commissioned Lieutenant. He was promoted to Lieutenant Commander on 25 September 1943, to Commander on 28 September 1944, and to Captain in 1946. On 1 January 1959, he was transferred to the Retired List and advanced to the rank of Rear Admiral on the basis of combat citations.

In June 1917, early in the World War I period, he was assigned to USS Albany, and soon transferred, as a signalman, to an English merchantman, for the first mercantile convoy to leave the United States for Europe. During the remainder of the war he served as a signalman aboard various merchant ships, making twelve round trips across the Atlantic Ocean. After the Armistice, he served aboard USS Santa Paula, which made five round trips across the Atlantic returning troops to the United States from Europe. Assigned next to the Brooklyn Navy Yard, he served as Athletic Coach for various sports teams there before his discharge in August 1919.

He had short periods of active duty as Lieutenant, USNR, in 1941 and 1942, and resigning his seat in the US Congress in September 1943, he spent three and one half years on active duty in the Pacific Area. Reporting in October 1943 to the SEVENTH Amphibious Force, he first had duty in the command of LST 457, and in February 1944 was designated Commander LST Division FORTY. He was awarded the Legion of Merit with Combat “V”, with citation as follows:

“For distinguishing himself by exceptionally meritorious service as Commander of a division of LST’s engaged in sustained operations against the enemy in the forward areas of the Southwest Pacific from December 1943 until July 1944. As an echelon commander of assault waves and resupply groups, subject to enemy air attack and gunfire he courageously and aggressively led his ships in carrying out their assigned tasks and thereby contributed materially to the success of amphibious operations in the Bismarck Archipelago and New Guinea. His splendid performance of duty was in keeping with the highest traditions of the Navy of the United States.”

In September 1944 he was placed in command of LST Group NINETEEN (his flagship LST 474), with additional duty as LST Training Officer, Admiralty Islands.  He was awarded the Bronze Star Medal with Combat “V”, for “gallantry in action during the period January 9-10, 1945 as Commander LST Group NINETEEN…”  The citation states:   “While in command of the ship on the left flank of White Beach in the assault landing at Lingayen Gulf, P. I., he resolutely beached for a period of approximately twenty-four hours during which time his vessels were subjected to artillery fire by day, mortar fire by night, and strafing attacks by enemy planes…”

He was also commended by Commander LST Flotilla SEVEN in the following language:  “You have made a record for D-Day participation and troops and cargo carried, that, in my opinion, no other flotilla can equal. You have been bombed, shelled and torpedoed, but the fires were extinguished, the holes plugged and NOT A SHIP HAS BEEN LOST.”

Subsequent to the cessation of hostilities, he sailed for San Diego, with LSTs 643, 466 and 474, arriving 10 January 1946. Both Groups (19 and 21) dissolved, he was ordered to the Bureau of Naval Personnel, Navy Department, Washington, DC. Then he served with the Navy Board formulating post-war policy on promotions and retirement of officers, headed by Rear Admiral Francis S. Low, USN. In March 1946 he was transferred to the Civil Relations Division, Office of the Secretary of the Navy, where he continued duty until released to inactive duty status on 23 December of that year. Since that time he has had active duty with the Pacific Fleet from 12 November 1952 to 22 December 1952, part of which time he served in the Korean Combat Area.

In addition to the Legion of Merit and the Bronze Star medal, each with Combat “V”, Rear Admiral Van Zandt had the Legion of Honor awarded by the Philippine Government; the Victory Medal, Transport Clasp; the American Defense Service Medal, Bronze “A”; European-African Middle Eastern Campaign Medal, American Campaign Medal; United Nations Service Medal; and the Philippine Liberation Ribbon with two stars. He also held the Naval Reserve Medal with two bronze stars for more than thirty years’ honorable service; and the Distinguished Service Medal of the Veterans of Foreign Wars of the United States.

Between World Wars I and II, he served in practically every department of the Pennsylvania Railroad, starting as a molder apprentice in the Altoona Shops. He was special representative of the Passenger Traffic Department when, as a Republican, he was elected to the 76th Congress in 1938 by a majority vote in every precinct of the Twenty-third Pennsylvania District (Blair, Centre and Clearfield Counties).

A member of the Veterans of Foreign Wars of the United States, he had served twice as Commander of the Department of Pennsylvania, VFW, and three times as the National Organization’s Commander in Chief, during the third time heading the goodwill delegation of the veteran’s tour of the Orient. He had served as Chairman of the Legislative Committee of the VFW since 1936 and the Organization’s Committee on Awards and Citations.

He was also a member of the Blair Company Historical Society; United Commercial Travelers; Sons of American Revolution; Lions Club; Grange; the American Legion, Forty and Eight; American Veterans (AmVets); the Patriotic Order, Sons of America; Mason, Mystic Shrine; Royal Order of Jesters; Knights of Pythias; Loyal Order of Moose; and Fraternal Order of Eagles. He had held numerous championships as a track man, and for many years was a member of Central Pennsylvania’s best basketball teams.

Rear Admiral Van Zandt’s wife was the former Miss Esther L. Meisenhoelder of Parkston, South Dakota, to whom he was married on 21 September 1947. RADM Van Zandt died at Arlington, Virginia on 6 January 1986 and is buried in Arlington National Cemetery.