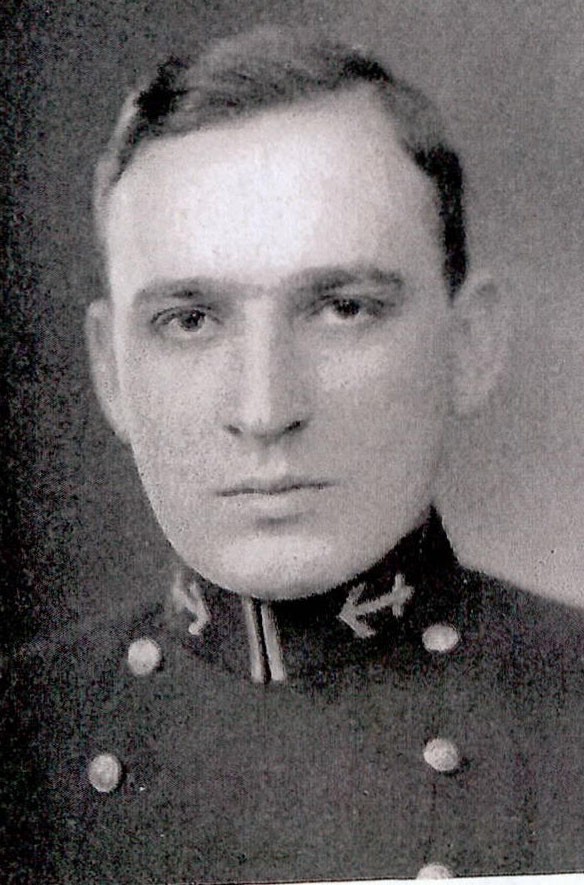 William Cotesworth Pinckney Bellinger, Jr., was born in McColl, South Carolina, on July 9, 1909, son of W. C. P. Bellinger and Mrs. (Annie McKnight) Bellinger. He attended McColl High School and The Citadel in Charleston, SC before entering the US Naval Academy from his native state in 1928. He was graduated with the Class of 1933-C on June 1, 1933, but was not commissioned due to Congressional legislation prior to that date. Commissioned Ensign in October 1935, to date from August 29, 1935, he subsequently advanced to the rank of Commander, his date of rank March 1, 1944.

Called to active duty in the fall of 1935, he served from December of that year until March 1939 in USS Northampton, a unit of Scouting Force. Upon detachment he was ordered to Special Service Squadron and was attached to USS Charleston, remaining aboard that cruiser when she was sent to Alaskan waters in October 1940, and while she operated in that area during the early period of World War II.

Detached from the Charleston in July 1943, he reported the next month to the Sub Chaser Training Center, Miami, Florida, for instruction as a prospective commanding officer. In October, the same year, he went to Orange, Texas, to assist in fitting out USS Tatum at to Consolidated Steel Corporation, and commanded that vessel for a year after her commissioning in November 1943.

During the last year of World War II, he successively commanded Escort Divisions 47, 87, and 55, and in November 1945 reported to the Maine Maratime Academy, at Castine, Maine, where he had duty until June 1949, first as Executive Officer, and from July 1948 as Naval Instructor and Head of the Department of Naval Science. He was at sea as Executive Officer of USS Shenandoah from July 1949 until January 1951, and for six months thereafter attended the course at the Armed Forces Staff College, Norfolk, Virginia.