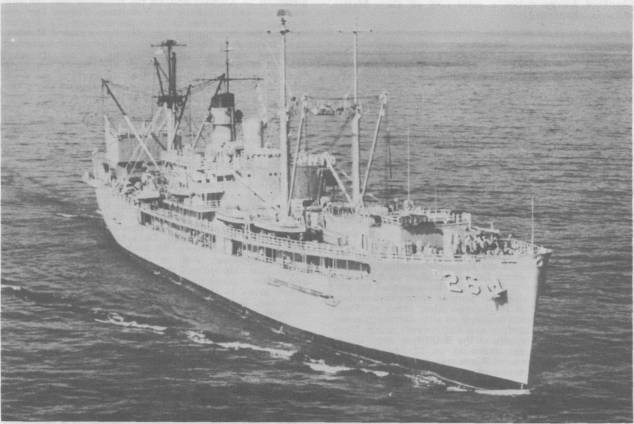 Caption: Shenandoah (AD-26) off Italy, July 1973. Since her construction, she had had additional superstructures installed forward and aft. The Klondike-class destroyer tenders are a Navy adaptation of the Maritime Commission's C3 fast cargo ship design.

A river formed by the junction of its north and south forks in Warren County, Virginia. It flows northeast some 55 miles, crosses the northeastern lip of West Virginia, and empties into the Potomac at Harpers Ferry, W. Va.

Shenandoah completed her fitting out in December 1945 and sailed to the east coast, via the Panama Canal, where she reported for duty with the Destroyer Force, United States Atlantic Fleet in January 1946. Until June 1947 she tended destroyers in various east coast ports; primarily at Norfolk,Va., her homeport. The tender deployed on her first tour of duty with the Sixth Fleet from June through August 1947. In the next 20 years, she was assigned 13 more tours in the Mediterranean.

Shenandoah's most publicized tour of duty was in 1964. She won international acclaim for her heroic rescue of the crew of the Dutch merchant ship Doris. The freighter broke loose from her moorings during the height of a storm and became impaled upon the rocks of Molo San Vincenzo in Naples' outer harbor. A line was run to the freighter by the crew of the Shenandoah, and all aboard were rescued minutes before Doris rolled over and sank.

The destroyer tender also won recognition in 1965 for her repairs to the bow of the carrier Shangri-La (CV-38) which had collided with a destroyer during maneuvers.

Ultimately, the ship was stricken from the Naval Vessel Register on 1 April 1980, and was sold on 5 February 1982 to Andy Machinery Co., Brownsville, Texas, to be broken up for scrap.