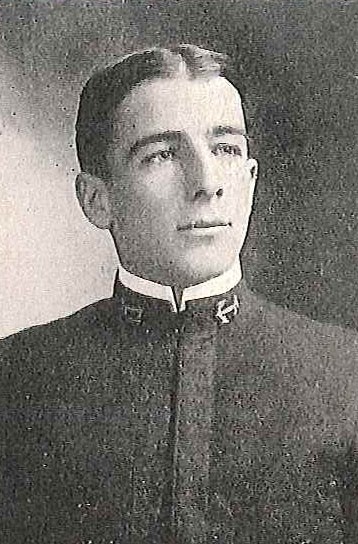 Aubrey Fitch was born in St. Ignance, Michigan, on June 11, 1883, the son of Ernest and Emily Louisa (Wray) Fitch. He attended public schools in St. Ignance, and St. John’s Military Academy, Annapolis, Delafield, Wisconsin, prior to his appointment to the US Naval Academy, Annapolis, Maryland, from his native state 1902. As a Midshipman he participated in athletics (football and boxing, four years, and crew and track, his Plebe year). Graduated in February 1906, he served the two years at sea, then required by law before commissioning, and was commissioned Ensign on February 13, 1908. By subsequent promotions, he attained the rank of Vice Admiral to date from December 28, 1942. On July 1, 1947 he was transferred to the Retired List of the US Navy, and advanced to the rank of Admiral, on the basis of combat awards.

Following graduation from the Navy Academy in 1906, he joined the USS Pennsylvania, operating in the Atlantic and in April 1907 was transferred to the USS Chauncey, a unit of the Fleet Torpedo Flotilla. From April 1908 to January 1909 he had consecutive duty in the USS Rainbow and USS Concord, both attached to the Pacific Fleet, after which he was assigned duty in the Atlantic, on board the USS Minnesota. Detached from that vessel on October 1909, he had instruction in torpedoes on board the USS Montgomery.

Completing the torpedo course in March 1910, he had duty in connection with the crew of the USS Delaware, on board the USS Franklin, and when the Delaware was commissioned on April 4, 1910, reported aboard. In September 1911, h became Assistant Discipline Officer (1911-1912) and later served as an Instructor in Physical Training (1912-1913) at the Naval Academy. In September 1913 he reported for duty in connection with fitting out the USS Balch at the Navy Yard, Philadelphia, Pennsylvania. He had service in the Balch from her commissioning March 26, 1914 until June 9 that year, then served on board the USS Duncan for two months and for one month had command of the USS Terry and the Second Division, Reserve Torpedo, Atlantic Fleet.

Between January and May 1919, he was again assigned to the Naval Academy, after which he became Naval Inspector of Ordnance in Charge at the Naval Ammunition Depot, Hingham, Massachusetts, with additional duty as Naval Inspector of Ordnance at the Naval Coaling Station, Frenchman’s Bay, Maine. In August 1920 he reported as Commander of a Division of Minelaying Destroyers, Mine Force, Atlantic Fleet (redesignated Commander Mine Squadron One and later Commander Division One, Mine Squadron One). While in that assignment, his primary duty was successive command of the USS Luce and USS Mahan.

Detached from the Mahan in December 1922, he served until March 1927 as a Member of the US Mission to Brazil at Rio de Janeiro, and following brief service in the Office of the Chief of Naval Operations, Navy Department, Washington, DC, joined the USS Nevada in May 1927. He served as her Executive Officer until transferred to command of the USS Arctic from November 1927 until June 1929. He next reported for aviation training at the Naval Air Station, Pensacola, Florida. Designated Naval Aviator on February 4, 1930, he had duty at the Naval Air Station, San Diego, California, before reporting in May 1930 as Commanding Officer of the USS Wright. Relieved of command of that seaplane tender in July 1931, he commanded the USS Langley, aircraft carrier for a year.

Completing a tour in June 1935 as Commanding Officer of the Naval Air Station, Naval Operating Base, Hampton Roads, Virginia, he reported as Chief of Staff to the Commander Aircraft, Battle Force. He remained in that assignment until April 1936, when he assumed command of the USS Lexington. From June 1937 to May 1938 he attended the Senior Course at the Naval War College, Newport, Rhode Island, and the following month became Commander Naval Air Station, Pensacola, Florida. In April 1940 he became Commander Patrol Wing Two, and seven months later reported as Commander Carrier Division One, US Fleet, his flag in the USS Saratoga. In March 1942 he became Commander Air Task Force in the Pacific, the USS Lexington, his flagship.

On May 9, 1942, Japanese planes attacked the Lexington, their principal target in retaliation fo the damage and destruction dealt their carriers and planes on May 7th and 8th by the Lexington. Regardless of all the protection from the ships guns and fighter planes, the Japs were numerous that two torpedo hits and at least two bomb hits ripped into the Lexington. Her fires extinguished, her aircraft recovered, several hours after the battle, Lexington was rocked by a terrific explosion, and finally went down.

Transferring his flag to another vessel, he continued to serve as Commander Air Task Force, Pacific, until September 20, 1942. “For exceptionally meritorious and distinguished service…” in that command during the Battle of the Coral Sea on May 7th and 8th, 1942, he was awarded the Distinguished Service Medal. The citation continues: “In the distinctive engagements of his battle, the skill and outstanding leadership of Rear Admiral Fitch, and the courageous devotion to duty of the units under his command, resulted in the sinking of one enemy Japanese carrier, the serious damaging of another and the sinking of one enemy cruiser, thereby contributing immeasurably to the ultimate success of our forces in those notable engagements.”

He next reported as Commander Aircraft, South Pacific Fleet, and for outstanding service in that command was awarded the Distinguished Flying Cross by the War Department and a Gold Star in Lieu of a Second Distinguished Service Medal (Navy). The citation follow, in part: Distinguished Flying Cross: “For extraordinary achievement… during the period October 1942 to June 1943… (he) has performed numerous hazardous flights in the combat zone of the Solomon Seas Area and the Coral Sea for the purpose of inspecting air activities an incident to the selection and development of bases for projected operations…”

Gold Star in lieu of a Second Distinguished Service Medal: “For exceptionally meritorious service… as Commander Aircraft, South Pacific Force during the period from September 21, 1942 to April 15, 1944… Overcoming tremendous obstacles in the early phase of offensive, he skillfully coordinated Navy, Marine Corps, Army, and New Zealand air units during an extended period of intensive combat, striking fiercely at the enemy and installations with proportionately light losses to the forces under his command…”

On August 1, 1944, he returned to the Navy Department, for duty as Deputy Chief of Naval Operations for Air. “For exceptionally meritorious conduct…” in this assignment he was awarded the Legion of Merit. The citation states that he “directed the aeronautic organization of the Navy, the readiness and deployment of air units, the planning and preparation of units, and all related logistics factors with extraordinary skill, efficiency and success during a difficult period of expansion and change…”

Between August 16, 1945, and January 15, 1947, he served as Superintendent of the US Naval Academy, with further duty as Commandant of the Severn River Naval Command. The first airman to head the Naval Academy, he was instrumental in the establishment of a Department of Aeronautics (authorized by the Navy Department on November 28, 1945). He then had two month’s duty in the Office of the Under Secretary of Navy, and reported in March 1947 as Senior Member, Naval Clemency and Inspection Board, Navy Department. He was so serving when relieved of all active duty pending his retirement on July 1, 1947.

For highly distinguished service in the Pacific theater of war, Admiral Fitch was appointed as Honorary Knight in the Most Excellent Order of the British Empire (Military). He also has the National Order of the Southern Cross, Degree of Grand Officer, awarded by the Brazilian Government in recognition of his services as a member of an American Naval Mission of that country; the French Croix de Guerre with Palms presented on August 25, 1945 by General Charles de Gaulle, President of the Provisional Government of the Republic of France; and Commander of the French Legion of Honor, also awarded by the French Government for services while Deputy Chief of Naval Operations (Air).