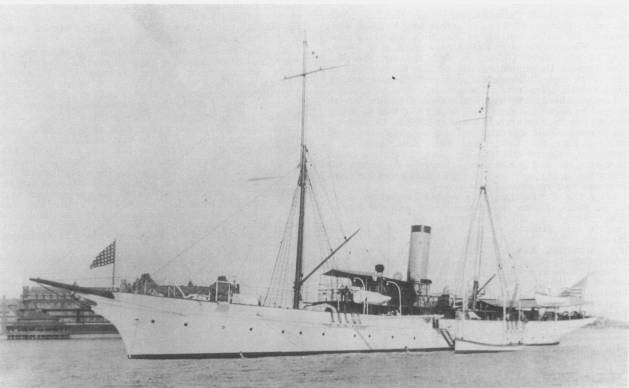 A county and its seat in southeastern South Dakota. They are located on the Missouri River.

Penelope, a steel-hulled schooner built in 1893 at Leith, Scotland, by Ramage & Ferguson, was acquired by the Navy in May 1898; renamed Yankton; and commissioned on 16 May 1898 at Norfolk, Va., Lt. Comdr. James D. Adams in command.

Purchased to augment the Navy for the Spanish-American War, Yankton remained at Norfolk until 18 June when she exited the Chesapeake Bay, bound for Cuba. She arrived off Santiago de Cuba on the 25th and reported for duty with Rear Admiral William T. Sampson's North Atlantic Fleet. Two days later, she took up blockade station off the southern coast of Cuba, near Cienfuegos. During three weeks of patrolling that station, she encountered the enemy on three occasions. First, as she was steaming to Casilda at about 0845 on 25 June, she observed sister yacht Eagle engaging a Spanish shore battery on Cape Muno. Yankton closed the shore to assist her and opened fire at 0850. Twenty minutes later, after learning that one of her shells had landed in the midst of the enemy battery, she ceased fire. That afternoon, she joined Dixie in shelling several Spanish gunboats lying behind the reef at Casilda. Three days later, at about 1600, she sighted smoke on the southwestern horizon, apparently made by a ship steering generally for Cienfuegos. Yankton chased the intruder for about two hours, but her quarry apparently enjoyed a three-knot advantage over the yacht. Yankton's commanding officer broke off the chase after tentatively identifying the fleeing vessel as the Spanish auxiliary cruiser Alfonso XII. However, he cited no evidence to corroborate that identification.

Following that encounter, the converted yacht resumed her blockade duty and continued the uneventful routine until 21 July. On that day, she got underway for Guantanamo Bay, where she remained for nine days -probably for upkeep and replenishment. On 30 July, she stood out of Guantanamo Bay and, the following day, resumed station off Cienfuegos. She remained there until three days after signing the armistice protocol of 12 August, when she departed Cuban waters. After a two-day stop at Key West, Fla., she continued her voyage north to Hampton Roads where she arrived on 22 August.

Yankton remained in the Virginia capes-Norfolk area until the beginning of 1899. On 15 January, she stood out of Chesapeake Bay and headed south to Cuba. After a one-night stop at Palm Beach, Fla., the yacht reached Guantanamo Bay on the 24th. She returned to the newly independent country to perform coastal survey work and to participate in the four-year, postwar occupation of Cuba. Once each year, she returned north to Portsmouth, N.H., for an annual overhaul of two to three months' duration before resuming her duties in Cuban waters. During that period, Yankton called most frequently at Santiago de Cuba and at the newly leased American naval base on the shores of Guantanamo Bay. Later, her duties took Yankton to Nipe Bay, Levisa Bay, and Gibara, all located in Oriente province along the northeastern shore of the island. By early 1902, she had moved round the island to the area of Cienfuegos and the Isle of Pines, both in the area of her old wartime blockade station off the southern coast of central Cuba. About that time, her area of operations was expanded to include Puerto Rico, a former Spanish possession acquired by the United States at the settlement of the Spanish-American War.

In June of 1903, Yankton completed her share of the Cuban survey work and departed Santa Cruz Del Sur on the 17th. After a six-day layover at San Antonio, Jamaica, to take on coal and provisions, she resumed her homeward voyage on 24 June and arrived in Port Royal, S.C., on the 29th. Later, she moved farther north to Norfolk, Va., where she became tender to Franklin, the receiving ship at the naval station there. That duty lasted through 1904. By 1905, the yacht was tender to the Atlantic Fleet flagship, Maine (Battleship No. 10). In the summer of 1906, she became simply a tender for the Atlantic Fleet and operated as such along the New England coast with the Fleet into the fall. Late in December, Yankton moved to Cuban waters, when the Fleet headed south for spring maneuvers, and supported American warships during exercises which lasted from January to April. During the second week in April, she returned to Norfolk and resumed tending duties out of that port until late in 1907.

On 16 December 1907, Yankton departed Hampton Roads to accompany the "Great White Fleet" on its round-the-world cruise. She visited Trinidad in the British West Indies and Rio de Janeiro, Brazil, on her way around Cape Horn. During the passage up the western coast of South America, the warship made six stops in Chilean ports, most notably Punta Arenas and Valparaiso-and one at Callao, Peru. After a short side trip to the Galapagos Islands during the first week in March and stops at Acapulco and Magdalena Bay in Mexico, she reached San Diego, Calif., on the 31st. She remained on the west coast until 30 June, when the fleet departed San Francisco, bound for Honolulu, Hawaii. From there, the yacht moved on to Tutuila, Samoa, and thence to New Zealand. After a visit to Auckland from 10 to 16 August, she steamed on to Australia where she made stops at Sydney and at Thursday Island.

On 9 September, Yankton set a course for the Philippine Islands and reached Manila Bay on the 18th and remained in the Philippines through the first week in October. While there, the yacht visited Cavite, Manila, and Olongapo several times each. On 9 October, she cleared Olongapo and joined the rest of the Fleet for the voyage to Japan. On 18 October, she arrived in Yokohama and provided services to the Fleet during a nine-day goodwill visit to Japan. After that, the Fleet returned to the Philippines for a month. On 29 November, she departed the Philippines to return to the United States via the Indian Ocean and the Mediterranean Sea. En route, she stopped at Singapore and Colombo, Ceylon, before transiting the Suez Canal early in January 1909. During her passage through the Mediterranean, the yacht stopped at Messina, Sicily, from 9 to 14 January, to assist the victims of an earthquake that had recently struck that island. From there, the ship continued her voyage, via Villefranche, France; Gibraltar; and Funchal in the Madeira Islands, and arrived at Fort Monroe, Va., on 17 February 1909.

Between 1909 and 1917, Yankton continued her routine as tender to the Atlantic Fleet. At the beginning of each year, she left the northeastern coast of the United States to support the Fleet during maneuvers and exercises out of Guantanamo Bay, Cuba. The lone exception to that east coast-Caribbean schedule came in the late fall of 1912 when she visited Hispaniola to investigate conditions and to protect American interests during political unrest in the Dominican Republic. She remained in the vicinity of that island from 6 November 1912 until 4 January 1913, steaming between and visiting the port towns of Monte Christi and Puerto Plata. Following that mission, she moved on to winter maneuvers in Cuban waters and generally resumed her previous routine.

During the first few months of 1917, Yankton patrolled the waters around Cuba, helping to protect the flow of trade to and from Cuba and other Latin American nations. War came early in the spring, less than two months after the German Empire announced its resumption of unrestricted submarine warfare. A month after the 6 April declaration of war, the converted yacht began duty with the newly organized Patrol Force. Her initial assignment sent her to the waters along the coast of northern New England. Late in August, Yankton headed for Gibraltar to join a section of the Patrol Force protecting Allied shipping in the approaches to the coasts of England and France from German U-boats.

The converted yacht served at the Gibraltar station until mid-August 1918. Besides the Atlantic approaches to the strait, she patrolled portions of the western Mediterranean. In addition to carrying out offensive patrols against enemy submarines, she joined the screens which escorted convoys on the final legs of their voyages to Europe and North Africa and shepherded Allied ships in the western Mediterranean. Her logs indicate several brushes with U-boats which, unfortunately, could not be confirmed by other sources.

On the other hand, the brief scrape with U-38 unquestionably did occur in May 1918. On the 5th, Yankton was steaming in company with a convoy bound from Bizerte, Tunis, to Gibraltar when she sighted the U-boat to port. As other ships opened fire, the yacht rang up full speed and charged to the attack. About that time, a tremendous explosion occurred, and Yankton crewmen spied a large geyser of water near the Italian steamer SS Alberto Treves. Yankton fired her guns at the culprit and, after the submarine submerged, dropped depth charges in the vicinity of its last known position. Alberto Treves had suffered a single, non-fatal torpedo hit and managed to make port at Marseilles, only to be sunk in the Atlantic five months later by a torpedo from U-155.

Through the remainder of the war, Yankton engaged no other enemy submarines, but she did assist torpedoed merchantmen. On 29 May, she helped to rescue the crew of another Italian steamer, SS Piero Maroncelli. On Independence Day 1918, the German Navy treated Yankton to a 4th of July display when a U-boat torpedoed the British ship SS Merida. Fortunately, the torpedo failed to sink Merida, and she reached port under her own power. The warship continued to patrol and escort convoys until 19 August when she received orders to return to the United States for repairs. Steaming via Lisbon, Portugal, and Ponta Delgada in the Azores, she reached the New York Navy Yard on 5 September. Yankton was operating with the Atlantic Fleet when the armistice was signed on 11 November 1918. Just less than a month later, she received orders directing her to return to European waters.

The ship arrived in Plymouth, England, on 16 January 1919, but departed soon thereafter to carry two naval officers to Murmansk, Russia, where they were to serve as American port officers. She reached her destination in turbulent northern Russia on 8 February. When Rear Admiral N. A. McCully arrived to take command of American forces in northern Russia on 23 February, he took up residence in the converted yacht. Later, he abandoned her for a more suitable flagship, Des Moines (Cruiser No. 15). Yankton and the other American ships assigned to northern Russia took no active part in the military operations conducted against Bolshevik forces located nearby, though they did, on occasion, provide some measure of support for the forces of other Allied nations. The yacht contented herself with patrols, with duty as radio ship at Murmansk, and with service as a military passenger transport between Murmansk and Arkhangelsk. In June, she served temporarily both as port officer and radio ship for Murmansk. On 9 July, after bringing passengers from Arkhangelsk to Murmansk, she departed the latter port (in company with SC-95, SC-256, and SC-354) and headed back to England.

She remained in European waters until near the end of 1919. On 7 December, she received orders to return to the United States and arrived in New York sometime in January 1920. She was decommissioned at New York on 27 February 1920 and remained there until sold on 20 October 1921. Presumably, her name was struck from the Navy list sometime between decommissioning and sale, probably about the time her sale was ordered on 5 June 1920. Following her sale, Yankton was converted to mercantile service, but she turned up in government records once again two years after her sale when she was seized in New York laden with illegal rum. After extensive litigation, she returned to merchant service, honest merchant service this time, until broken up at Boston during the summer of 1930.