Alfred Thayer Mahan--born on 27 September 1840 at West Point, N.Y., to Dennis Hart and Mary Helena [Okill] Mahan. The young Mahan spent his formative years at West Point, where his father was a distinguished professor of Civil and Military Engineering. Sent to boarding school in 1852 at St. James School, near Hagerstown, Maryland, he then entered Columbia College in New York City two years later. Through the influence of Mississippi Senator Jefferson Davis, the 16-year-old Mahan obtained an appointment to the Naval Academy, entering the Third Class through special arrangement on 7 October 1856, as an acting midshipman. Mahan graduated second in his class of twenty from the U.S. Naval Academy in 1859. 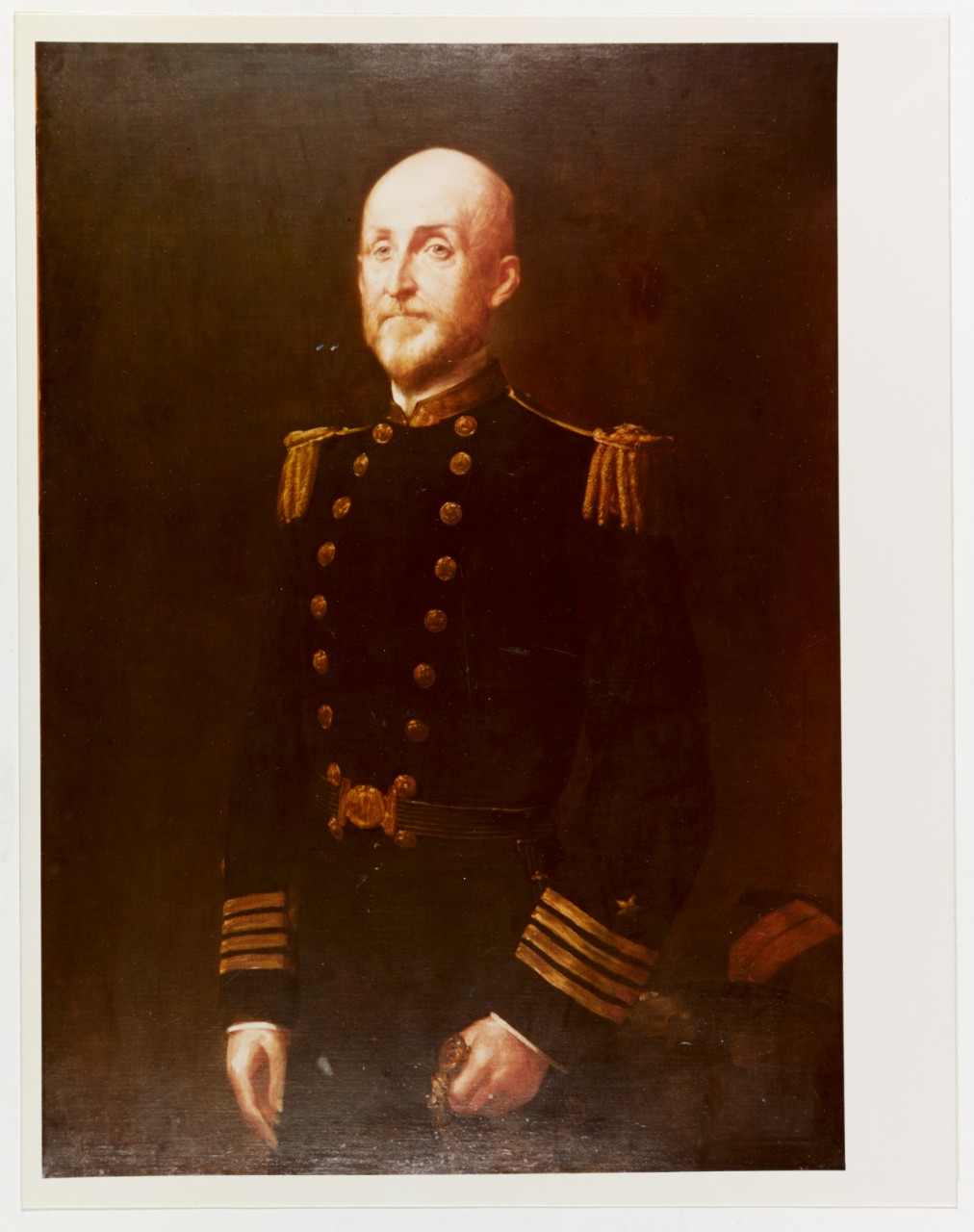 Assigned to frigate Congress from 9 June 1859 until 1861, Mahan received a promotion to first lieutenant on 31 August 1861; four months after the start of the U.S. Civil War tore the country apart. Joining the 11-gun corvette Pocahontas as her executive officer, he participated in the attack on Port Royal, S.C., from 3–7 November 1861. Arriving at the conclusion of the bombardment, Pocahontas collided with the anchored Union sloop Seminole. As deck officer, Lt. Mahan was the man responsible, but he shifted blame to his commanding officer, Captain Percival Drayton, ironically claiming Drayton had more time on staff duty than shipboard experience.

Sent as an instructor to the Naval Academy, which had moved from Annapolis to Newport, R.I., to protect and continue the school during the war, Mahan made a cruise with the midshipmen on board the 36-gun frigate Macedonian to Europe. In October 1863, he joined the monitor Seminole of the West Coast Blockading Squadron and later served on the staff of Rear Adm. John A. Dahlgren, commanding the South Atlantic Blockading Squadron, off Charleston, S.C. On 31 May 1865, Mahan reported on board the bark Mucoota before sailing to the Orient with sloop-of-war Iroquois. Promoted to lieutenant commander on 7 June 1865, Mahan witnessed the opening of the treaty ports at Kobe and Osaka, Japan, in 1867.

After a tour of duty on the China Station in 1869, Mahan received permission to visit Europe. Upon his return to the U.S., he served on board relief ship Worcester, chartered by the Navy Department to carry foodstuffs to French victims of the Franco-Prussian War. Detached from Worcester on 3 August 1871, Mahan married Ellen Lyle Mahan (Evans), eleven years his junior, in June 1872, a union that would produce two daughters (Helen Evans and Ellen Kuhn) and a son (Lyle Evans). Mahan also received a promotion to commander on 20 November 1872, as well as his first ship command in December 1872, with the South Atlantic Squadron gunboat Wasp.

Problems with ship handling began plaguing Mahan throughout the rest of his career at sea. In the first of several incidents, Cmdr. Mahan ran Wasp into a barge at the ship’s anchorage in Montevideo, Uruguay. On 3 November 1874, he caused “slight damage” to an Argentinian warship in a storm off Buenos Aires. On yet another occasion, Mahan wedged Wasp into a dry dock caisson at Montevideo, where she remained stuck for 10 days. Mahan’s biographer, Robert Seager II commented, “Alfred Thayer Mahan may be the only commanding officer in the history of the U.S. Navy rendered hors de combat by a dry dock.” Upon being relieved from command of Wasp in January 1875, a beleaguered Mahan returned to the U.S. to await further orders.

Designated a member of the Board of Examiners at the Naval Academy in August 1876, Cmdr. Mahan won third prize in the Naval Institute’s contest for the essay, “Naval Education for Officers and Men,” his first accepted piece of writing for publication. In the summer of 1880, he received orders to the Navigation Department, New York Navy Yard, and on 9 September 1883, assumed command of the monitor Wachusett, then moored at Callao, Peru. Sadly, Mahan’s troubles with commanding ships at sea continued. According to a young officer on board Wachusett, she collided, in broad daylight, with a “bark under sail, which without question had the right of way. It was our duty to keep clear.” An unidentified officer under Mahan’s command mused sarcastically, “The Pacific Ocean wasn’t big enough for us to keep out of the other fellow’s way.”

In 1885, Adm. Stephen B. Luce ordered Cmdr. Mahan to the newly established Naval War College, Newport, R.I., to lecture on tactics and naval history. After receiving a promotion to captain on 23 September 1885, Mahan performed additional duties selecting the site for a Navy Yard on the west coast, at Puget Sound, Washington Territory. After long preparation in the fall of 1886, Capt. Mahan delivered the first of a series of lectures that would become world famous, following publication in 1890 of his seminal work The Influence of Sea Power upon History, 1660–1783. While publishing other highly praised works on naval tactics and doctrine, Capt. Mahan’s study of nations utilizing the sea, coming at a time of great technological development and challenge to Britain’s long leadership in recent maritime history, had a profound effect upon the thinking and policies of many nations.

Capt. Mahan served two separate terms as President of the Naval War College, from 1886-1889 and again from 1892–1893. During the start of his second term, his highly successful The Influence of Sea Power Upon the French Revolution and Empire, 1793–1812, published in 1892, received further acclaim. The impact of Capt. Mahan’s works on several leaders and strategists in Europe, notably Imperial Germany’s Kaiser Wilhelm II and Adm. Alfred von Tirpitz, proved considerable. Tirpitz used The Influence of Sea Power Upon History, translated into German in 1898, to push the Reichstag into voting for his First Navy Bill, committing the country to building a high seas fleet that could compete with the British Royal Navy.

Capt. Mahan returned to the fleet to command protected cruiser Chicago in early 1893. Shortly after taking command of her, an accident occurred while Mahan was on the bridge. On 27 May, Chicago slightly collided with Naval Academy training ship Bancroft, off the Brooklyn Navy Yard. Although neither ship suffered serious damage, Mahan’s lackluster seamanship “grounded, collided, or otherwise embarrassed every ship (save the Iroquois) he ever commanded.” Shortly after the accident, Capt. Mahan injured one of his legs, placing him on restricted duty. In a letter to his daughter, Ellen, on 9 July 1893, Mahan claimed, “The doctor says I must go on the sick list for a fortnight and keep my leg perfectly quiet, so if the Chicago does anything amiss in that time I shall not be the culprit.”

Ironically, despite Capt. Mahan’s absence, British tanker Azov crashed into Chicago off the Netherlands only weeks after his injury, continuing the cruiser’s string of bad luck. After returning to duty on European stations in Chicago, Mahan received several honors in recognition of his writings by many distinguished personages of Europe, including honorary degrees from the universities of Oxford and Cambridge. Later, Yale, Columbia, Dartmouth, and McGill all honored him at home. Returning to the U.S. in March 1895, Capt. Mahan returned to his preferred role as lecturer at the Naval War College in May.

After expressing a wish to retire after a nearly forty-year career, the Navy granted Mahan his request on 17 November 1896. However, after a recall to active duty at the beginning of the Spanish-American War in April 1898, he received appointment to the Naval Board of Strategy in May. In early 1899, while Mahan carried out his duties during the war, Czar Nicholas II of Russia proposed convening a new conference for the major powers to discuss the role of belligerents in warfare, based on the Lieber Code, signed by President Abraham Lincoln in April 1863. Taking place at the Dutch seat of government, the American Commission to the Peace Conference of The Hague, Netherlands, met for the first time on 17 May 1899, at the home of the American minister, Stanford Newel. Capt. Mahan served as one of six American delegates to the Hague Convention. Delegates from 26 other countries attended, and the work of the conference became divided between three great committees to address the conduct of warfare.

The first committee set about discussing the limitation of armaments and war budgets, as well as the use of explosives at land and sea. The second committee concerned itself with maritime warfare, while the third proposed methods of preventing armed conflicts between nations. Capt. Mahan served on the first and second committees. The British delegation, seeking to retain the Royal Navy’s historical advantage at sea, opposed an agenda to pursue limits on all navies of the great powers. Capt. Mahan agreed with the British committee members, making clear his opposition to limiting armaments at the conference.

A year after the Peace Conference, in 1900, The Royal United Service Institute awarded Mahan its Chesney Gold Medal in recognition of his literary work marking a lifetime of distinguished contribution to international defense and security of Great Britain or a western ally. Capt. Mahan received the medal for his exemplary work on the history of the British Empire. In 1902, he served as President of the American Historical Society, and his September National Review article, “The Persian Gulf and International Relations,” popularized the term “Middle East.” Recalled again to active duty in May 1903, Mahan served as a member of the Board of Visitors, Naval Academy and the Senate Commission on Merchant Marine (November 1904).

The increasingly popular naval theorist added two further volumes to his sea-power studies in later years. His two-volume Sea Power in Relation to the War of 1812, published in 1905, followed his earlier work The Life of Nelson: The Embodiment of the Sea Power of Great Britain (two volumes published in 1897). These works explored theories of an individual’s role in shaping history, mostly by highlighting time-honored values of the person’s service, loyalty, and bravery in accomplishing tasks and upholding traditions of naval service. The immense biography on Adm. Horatio Nelson found the author seeking to resurrect Nelson’s hero status within Britain, remaining the standard work about the naval warrior for half a century.

Still in demand in his later years, the ever-popular Mahan chaired the studies and conclusions of the Naval War Board during the War with Spain (July 1906), and became a member of the Committee on Documentary Historical Publications under the Committee on Departmental Methods (October 1908). Later, Adm. Mahan served on the Commission to Report on Reorganization of the Navy Department (February 1909), and lectured for the final time at his beloved Naval War College. Mahan received promotion to rear admiral on 29 June 1906, and died at Washington, D.C., on 1 December 1914. The prolific author of 20 books and 137 articles, Mahan is buried at Quogue, Long Island.

After shakedown, Mahan operated off Cuba until May 1919 when she steamed to the Azores to become one of the guide ships for the transatlantic flights of Navy flying boats NC‑1, NC‑3, and NC‑4. Returning to Boston by way of Brest, France, on 21 June, Mahan was converted to a light minelayer and was redesignated DM‑7 on 17 July 1920.

With the exception of a curise to Pearl Harbor, T.H., for maneuvers early in 1925, Mahan operated along the east coast, in the Caribbean and off the Panama Canal Zone for the next ten years, During this time she participated in fleet training exercises; patrolled courses for international races; e.g., the International Six Meter Sailing Races of 1922 and 1927; assisted in salvage operations for submarines S‑51 (September 1925, off Block Island and S‑4 (periodically from 17 December 1927 through mid-March 1928, off Provincetown, Mass.); and conducted reserve training cruises in the Caribbean, 1928 to September 1929. Throughout the decade, in addition to her regular duties, she served as an experimental ship, testing new equipment for the Navy-s future use.

On 20 September 1929, she entered Philadelphia Navy Yard, Pa., where she decommissioned on 1 May 1930. Stricken from the Navy Register on 22 October, she was sold for scrap on 17 January 1931 to the Boston Iron & Metal Co. of Baltimore, Md.