George Beall Balch, born in Shelbyville, Tenn., on 3 January 1821, was appointed acting midshipman on 30 December 1837. After serving in sloop Cyane during a cruise to the Mediterranean between 24 June 1838 and 16 May 1841, Balch saw duty in schooner Grampus and sloop Falmouth before attended the Naval School in Philadelphia, Pa., where he was promoted to passed midshipman on 29 June 1843. Eventually assigned to steamer Princeton, Midshipman Balch served in that warship during the war with Mexico. He participated in the abortive August 1846 assault on Alvarado, where strong currents in the river prevented the flotilla's boats from landing, and in the successful 9 March 1847 landing of General Winfield Scott's army at Vera Cruz [Veracruz]. During the latter campaign, Balch served as acting master of captured schooner Falcon. Returning to Princeton, he accompanied the steamer on a two year cruise to the Mediterranean, sailing east on 17 August 1847 and returning to the Boston [Mass.] Navy Yard on 17 July 1849. He then saw service at the Naval Observatory in Washington, D.C., where he was promoted to lieutenant on 16 August 1850.

Balch then served as executive officer of the sloop-of-war Plymouth, sailing to the Orient on 23 August 1851 for an extended cruise on the East Indies Station. While there, Plymouth joined Commodore Matthew Calbraith Perry’s expedition to Japan and, in company with side-wheel steamers Mississippi and Susquehanna and sloop-of-war Saratoga, entered Tokyo Bay on 8 July 1853 for trade negotiations with the Tokugawa Shogunate. The squadron departed on 17 July after presenting a letter from President Millard Fillmore to the Japanese asking for the opening of two ports to American trade and better treatment for shipwrecked sailors. The squadron spent the fall in Canton, Hong Kong and Shanghai, helping to protect U.S. trade interests there (primarily tea and silk) following the continued spread of the Taiping Rebellion in southern China.

While most of Perry's squadron returned to Japan in February of 1854, where the commodore eventually signed a limited trade agreement on 31 March 1854, Plymouth remained at Shanghai to help protect American-owned warehouses and other property ashore. In February, soon after the squadron's departure to Japan, Imperial Chinese troops began assaulting foreigners, sacking warehouses and exacting tolls on boats sailing up and down the Huangpu river. On 3 April, after sword-wielding soldiers accosted two British citizens, the commanders of the British ships Encounter and Grecian, as well as Commander Kelly from Plymouth, together resolved to drive off the Chinese troops, who had established fortified camps in the city. The next day, Balch led 60 sailors and marines and 30 sailors from U.S. merchant ships against the left flank of the entrenchments, while a force of 150 British sailors and marines, and additional "Shanghai Volunteers" attacked on the right. Supported by gunfire from two privately-owned field pieces and a howitzer, the Allied force routed the Chinese defenders, who "fled in great disorder, leaving behind them a number of wounded and dead." Balch suffered wounds in the action, which also saw one sailor killed and two marines wounded. The sloop-of-war returned to Norfolk on 11 January 1855 before conducting a spring cruise off the east coast as a Naval Academy school ship.

After an assignment to the Washington Navy Yard in 1855-57, Balch again went to sea in Plymouth to support a training cruise. He later served in Jamestown, joining that sloop in December 1857 for a cruise in the West Indies before he traveled to Mare Island, California, for service in sloop-of-war St. Mary's. After a short cruise off the west coast of Central America between August 1858 and February 1859, Balch returned to the east coast via Panama.

Upon the outbreak of the Civil War in April 1861, Balch was ordered to Portsmouth, New Hampshire, where he helped put frigate Sabine in commission on 30 August. The ship-rigged sailing ship joined the Atlantic Blockading Squadron on 9 September. Sabine helped rescue 500 men from the chartered troop transport Governor during a storm on 2 November 1861. Balch then assumed command of steamer Pocahontas, leading a flotilla of boats during the Tybee Island landings on 26 December before cruising off the Carolina coast, keeping a watchful eye for Confederate raiders and blockade runners. He was promoted to commander on 16 July 1862.

Given command of screw-sloop Pawnee at Philadelphia later in 1862, Cdr. Balch coordinated the towing of ironclad Patapsco south to Port Royal, South Carolina, in February before joining the South Atlantic Squadron. There, the screw-sloop conducted coastal reconnaissance off the southern states, engaging shore batteries as required and watching for blockade runners. On 1 February and 18 June 1864, Pawnee assisted in the capture of Confederate steamers General Sumter and Hattie Brock respectively, seizing their valuable cargoes of cotton, turpentine, rosin and railroad iron. The warship also participated in the Stono River expedition in early July and Broad River expedition in November 1864. The following year, on 9 February 1865, Balch directed Pawnee up the Togoda Creek where, in company with side-wheel gunboat Sonoma and side-wheel steamer Daffodil, the warships destroyed three Confederate batteries near North Edisto, South Carolina. The ships then landed sailors and marines to occupy the town of Georgetown on 23 February 1865, clearing the way for Union ships to supply Major-General Tecumseh Sherman's Army operating in the area. Balch was commended to the Navy Department by Rear-Adm. John A. Dahlgren for his services during this operation.

After Pawnee decommissioned at Portsmouth on 26 July 1865, Cdr. Balch received shore service at the Washington Navy Yard, where he was promoted to captain on 25 July 1866. He commanded flagship Albany in the North Atlantic Squadron between 1868 and early 1870. Capt. Balch then returned to the Washington Navy Yard for duty with the Bureau of Navigation, where he was promoted to commodore on 13 August 1872. He served as governor of the Naval Asylum, Philadelphia (1873—1876) before his appointment to the Light House Board (1877—1878). After a term as a member of the Board of Examiners in 1878, during which time Capt. Balch achieved flag rank, being promoted to rear-admiral on 5 June 1878, Balch undertook a two-year assignment as Superintendent of the Naval Academy between 1879 and 1881. 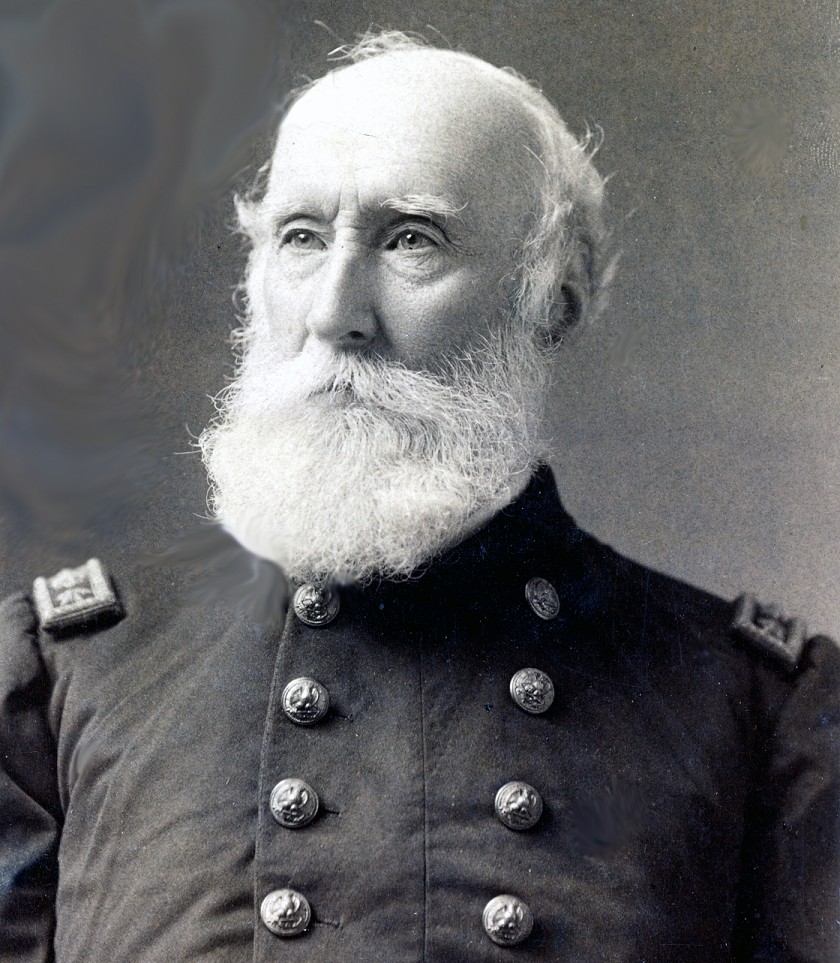 Rear Adm. Balch then took command of the Pacific Station on 21 June 1881. That assignment lasted until he retired from the service in January 1883, initially taking up residence in Baltimore, Md., before eventually moving to Raleigh, North Carolina, where he died on 16 April 1908.

The first Balch (Destroyer No. 50) was laid down on 7 May 1912 at Philadelphia, Pa., by William Cramp & Sons Ship and Engine Building Co.; launched on 21 December 1912; and sponsored by Miss Grace Balch, daughter of Rear Admiral Balch.

Commissioned on 26 March 1914, Lt. Cmdr. David C. Hanrahan in command, Balch served only a few months with the Torpedo Flotilla, Atlantic Fleet, carrying out torpedo firing practice off the Virginia capes before participating in a Presidential Fleet Review for President Woodrow Wilson at New York City on 7 May 1914. Following fleet maneuvers with the Submarine Flotilla out of New London, the Torpedo Flotilla joined the battleship squadrons in Narragansett Bay for maneuvers organized by the Naval War College. Returning to the New York Navy Yard, Brooklyn, N.Y., that summer, Balch was placed in reserve commission on 24 July 1914.

The destroyer was placed in full commission again on 17 December 1914 and rejoined the Atlantic Fleet. Prior to the entrance of the United States into the Great War [World War I] she served on Neutrality Patrol duty, trying to protect U.S. and neutral-flagged merchant ships from interference by British or German warships and U-boats.

On 8 October 1916, only the day after the German submarine U-53 had visited Newport, R.I., and 31-year old Kapitänleutnant Hans Rose, U-53’s commanding officer, had delivered a letter to be transmitted to German Ambassador to the U.S. Johann Heinrich [Count] Bernstorff, and had paid courtesy calls upon Rear Adm. Albert Gleaves and Rear Adm. Austin M. Knight, reports began telling of a German submarine’s wreaking havoc on shipping off the Nantucket Lightship. With confirmation of those tidings, Rear Adm. Gleaves, Commander Destroyer Force, Atlantic Fleet, ordered his ships to sea to rescue survivors. Balch, requested by Kapitänleutnant Rose to move out of the way to permit him a shot at the British passenger steamship Stephano, en route from St. Johns, Newfoundland, to New York City, complied with the request. Balch later rescued the survivors (there had been no fatalities).

When the U.S. entered the war in April 1917, Balch fitted out, installing depth charge tracks and other wartime gear, in preparation for deployment.  On 7 May, the Navy Department organizes destroyers preparing for distance service to designated divisions; among the three divisions organized that day, Destroyer Division Nine comprised Aylwin (Destroyer No. 47), Parker (Destroyer No. 48), Wilke (Destroyer No. 67), Balch, Ammen (Destroyer No. 35) and Burrows (Destroyer No.29). On 14 June, Division Nine, sailed from New York for European waters. Based at Queenstown [Cobh], Ireland, she reported for duty with the Queenstown Force Commander. She commenced convoy escort duties soon thereafter, which generally meant shepherding Entente merchant ships through the "submarine danger zone" in the western approaches to the British Isles.

Caption: Port side view of Balch in a disruptive camouflage scheme, underway in the war zone, as she passes a channel buoy circa 1917-1918. Note her identification number [50] painted below the main deck level, beneath the bridge. (Naval History and Heritage Command Photograph NH 88085)

Caption: Starboard side view of Balch in her disruptive camouflage at an unspecified port, circa 1917-1918. (Naval History and Heritage Command Photograph NH 100429)

While this duty proved relatively uneventful, Balch did twice encounter German submarines. On 29 January 1918, while steaming off Liverpool, she dropped two depth charges over a diving U-boat, alas to no effect. Then, on 12 May, the destroyer joined other escorts in pounding a U-boat spotted near convoy HS-60, with Balch dropping 12 depth charges that helped drive off the enemy submarine.

There were other perils at sea, however, most notably on 20 October 1918 when Paulding (Destroyer No. 22) collided with Balch during convoy escort operations, the impact knocking Balch's port hydrostatic depth charge overboard, but with the safety fork being in place it did not explode. BM2c Albert Cerveny, Cox. Frank Sekowski, and GM2c Frank H. Sumner all received commendations for setting other charges on “safe” as they perceived a collision as imminent.  Balch did suffer steering gear damage which required two weeks of repair at Queenstown. Then, on 5 November 1918, while escorting a convoy in the English Channel, the destroyer helped Sterett (Destroyer No. 27) rescue 29 survivors of the foundering merchant ship Dipton.

After returning to Queenstown with survivors, Balch received orders to sail for home and she departed Ireland on 16 November. She arrived at Norfolk via Ponta Delgada, Azores, on 1 January 1919 and was placed in ordinary. Returned to commission in early April, the destroyer sailed to the West Indies for three weeks of maneuvers out of Guantánamo Bay, Cuba. Balch then returned to Norfolk on 28 April for an overhaul. Postwar funding shortages kept the destroyer in port until late 1921 when Balch briefly cruised with the Torpedo Flotilla, Atlantic Fleet, before financial considerations led to her inactivation. 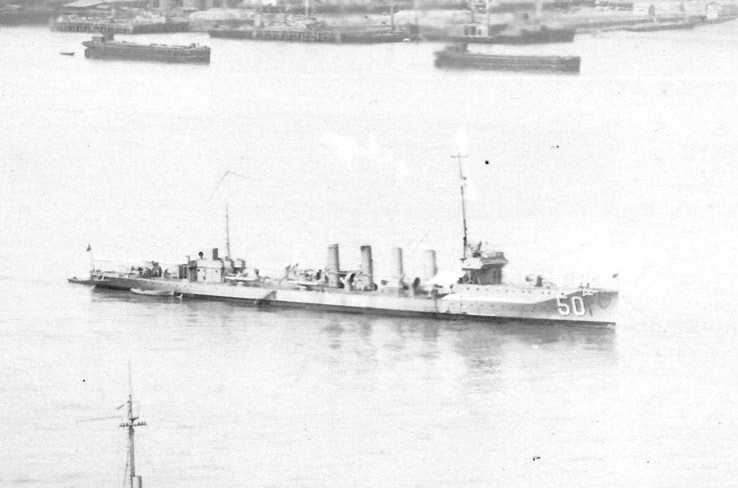 Placed out of commission in reserve at Philadelphia on 20 June 1922, Balch remained on "red lead row" (so called owing to the color of the anti-corrosion paint) until the destroyer was dropped from the reserve list on 1 November 1933. The old warship was stricken from the Navy List on 8 March 1935 and ordered scrapped at the Philadelphia Navy Yard on 23 April 1935 in accordance with the terms of the London Naval Treaty.