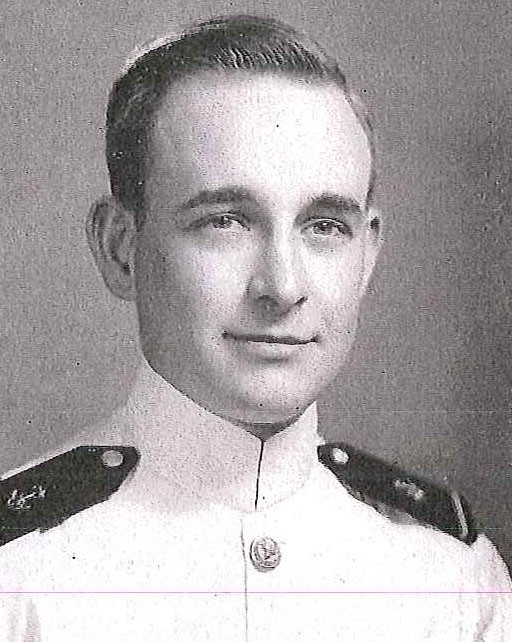 Kenneth Monroe Carr was born in Mayfield, Kentucky, on March 17, 1925, son of Samuel Norman and Nancy Elmore (Monroe) Carr. He graduated from San Bernardino High School and attended San Bernardino Valley College, prior to enlisting on March 3, 1943 in the US Navy. He had recruit training at the Naval Training Station, San Diego, California, until May 1943, then attended the Naval Academy Preparatory School, San Diego. From August 1943 to February 1944 he was attached to Standard Landing Craft Unit #16 and in that assignment served in various transports (attack and high speed), including USS President Jackson, which landed elements of the Third Maine Division on Bougainville in November 1943. He is entitled to the Ribbon for and a facsimile of the Navy Unit Commendation awarded the President Jackson.

In February 1944 he joined Boat Pool #12 at Nissan Island, Solomon Islands, where he remained until June 1944. In February of that year, he participated in the initial landing on Green Island, Bismarck Archipelago. Under the V-12 Program, he next attended the University of Louisville, Louisville, Kentucky and in June 1945 entered the US Naval Academy, Annapolis, Maryland, on appointment from the State of California. Graduated and commissioned Ensign on June 3, 1949, he subsequently advanced in rank to that of Captain, to date from August 1, 1968. His selection for the rank of Rear Admiral was approved by the President on March 28, 1973.

Following graduation from the Naval Academy in 1949, he joined USS Eversole (DD-789) and in May 1950 transferred to the USS Flying Fish (SS-229). Detached from that submarine in June 1950, he next had submarine training at the Submarine School, New London, Connecticut and in January 1951 was assigned as Assistant in the Production Department at the Mare Island (California) Naval Shipyard. As such he had duty with the pre-commissioning detail of USS Blackfin (SS-322), undergoing conversion to a Guppy submarine. He reported on board that submarine as Supply Officer upon her recommissioning, May 15, 1955, and subsequently served, November 1951 to January 1953, as Gunnery Officer, then Engineer Officer.

From December 1960 to March 1962 he was Executive Officer of USS Scorpion (SSN-589), after which he had pre-commissioning duty in USS James Monroe (SSBN-622), building at the Newport News (Virginia) Shipbuilding and Dry Dock Company. He joined that fleet ballistic missile submarine upon her commissioning, December 7, 1963. Detached from that undersea craft in March 1964, he had instruction at the US Atomic Energy Commission, Washington, DC.

He reported in July 1968 as Head of the Submarine Warfare Branch, Undersea Warfare Development Division, Office of the Chief of Naval Operations, Navy Department, Washington, DC. He remained there until July 1970, after which he served as Senior Member of the Naval Nuclear Propulsion Examining Board, US Atlantic Fleet. “For outstanding meritorious service . . . from August 1970 to April 1972 . . .” he was awarded the Meritorious Service Medal. The citation further states in part: “. . . His application of meticulous professionalism and his close supervision of the Board’s efforts contributed directly to the maintenance of high standards in operational reactor safeguards examinations and to the continuing operational safety of Atlantic Fleet nuclear powered ships . . .”

In April 1972 he reported as Chief of Staff and Aide to Commander Submarine Force, US Atlantic Fleet and a year later became Military Assistant to the Deputy Secretary of Defense, Washington, DC.