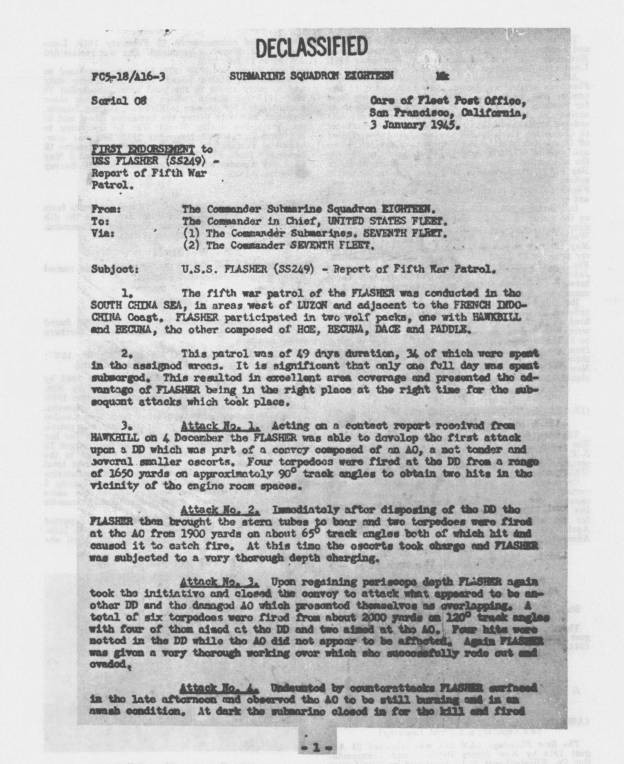 A large edible fish, also known as tripletail, found in the western Atlantic from Cape Cod to northern South America.

Flasher arrived at Pearl Harbor from New London 15 December 1943 to prepare for her first war patrol, for which she sailed 6 January 1944. Bound for her patrol area off Mindoro, she sank her first target 18 January, sending a 2,900-ton former gunboat to the bottom. She then sank a freighter off Manila 5 February, and sank two cargo ships of the same convoy on 14 February. Flasher arrived at Fremantle 29 February to refit.

Action-bound once more, the submarine departed Fremantle 4 April 1944 for the coast of French Indochina on her second war patrol. On 29 April she contacted the river gunboat Tahure guarding a freighter off Hon Doi Islands, and sank both. After sinking a large cargo ship in the Sulu Sea 3 May, Flasher shaped course for Fremantle, arriving 28 May for refit until 19 June.

Flasher made her third war patrol in the South China Sea, where on 28 June 1944 she contacted a heavily escorted convoy of 13 ships. She made a cautious approach, undeterred by the escort, and shortly after midnight 29 June, broke into the convoy to sink a freighter and badly damage a large passenger-cargo ship. Her next victim was a freighter, sunk 7 July. Twelve days later, Flasher sighted cruiser Oi, escorted by a destroyer. Two attacks, each followed by a heavy depth charge retaliation from the destroyer, sufficed to sink this choice target, a fact confirmed several hours later when a periscope observation revealed only the destroyer in sight. Seven days later, she sank another important target, a merchant tanker, and the same day damaged another tanker later sunk by one of her sisters. With all her torpedoes gone, Flasher put back for Fremantle, where she replenished and refitted between 7 and 30 August.

During her fourth war patrol, in the Philippines, Flasher headed a coordinated attack group which included two other submarines. Although she was on lifeguard station during the air attacks preliminary to the invasion of the Philippines during part of this patrol, Flasher sank three ships, a former light cruiser on 18 September, a transport on 27 September, and a cargo ship on 4 October. She returned to Fremantle 20 October.

Heading the same attack group, Flasher now commanded by Lieutenant Commander G. W. Grider, sailed on her fifth war patrol 15 November 1944, bound for Camranh Bay. On 4 December one of her companions reported a tanker convoy, and Flasher set a course which would bring her to the target. As she made her approach in a heavy downpour, a destroyer suddenly loomed up before her, and Flasher launched her first spread of torpedoes at this escort. The destroyer was stopped by two hits, and began listing and smoking heavily. Flasher got a spread of torpedoes away at a tanker before she was forced deep by a second destroyer, which dropped 16 depth charges. Rising to periscope depth, Flasher located the tanker burning and covered by yet a third destroyer. Speedily reloading, she prepared to sink the destroyer and finish off the tanker, and though almost blinded by rain-squalls, she did just this with a salvo of four torpedoes, two of which hit the destroyer, and two of which passed beneath her as planned to hit the tanker. Once more, counter-attack forced Flasher down, and when she surfaced she found no trace of the two damaged destroyers. The tanker, blazing away, was still guarded by three escorts until abandoned at sunset, when Flasher sank her with one torpedo. The two destroyers, both found after the war to have been sunk, were Kishinami and Iwanami.

Flasher contacted another well-guarded tanker convoy on the morning of 21 December 1944, and she began a long chase, getting into position to attack from the unguarded shoreward side. In rapid succession. Flasher attacked and sank three of the tankers, receiving no counter-attack since the enemy apparently believed he had stumbled into a minefield. One of these tankers was the largest she sank during the war, the other two, of the same displacement, were tied for third-largest.

Refitting at Fremantle once more between 2 and 29 January 1945, Flasher made her sixth war patrol on the coast of Indochina. Contacts were few, but on 21 February she sank a sea truck by surface gunfire, and 4 days later sank a cargo ship with torpedoes. She completed her patrol upon her arrival at Pearl Harbor 3 April 1945, and sailed a few days later for a west coast overhaul.

Bound for Guam on a seventh war patrol at theclose of the war, Flasher was ordered back to New London, where she was decommissioned and placed in reserve 16 March 1946. The submarine was struck from the Naval Register on 1 June 1959 and sold for scrap to Intercontinental Engineering & Manufacturing Co. on 24 May 1963. 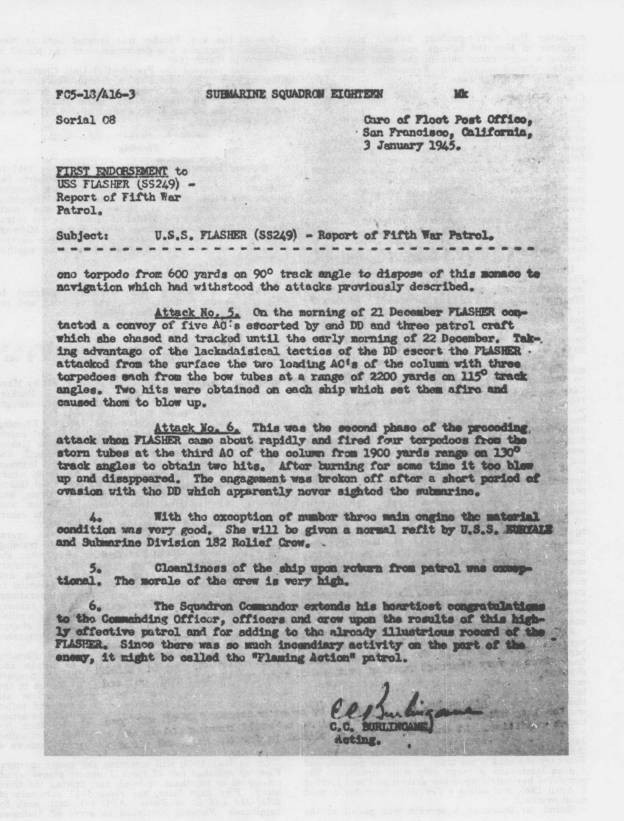