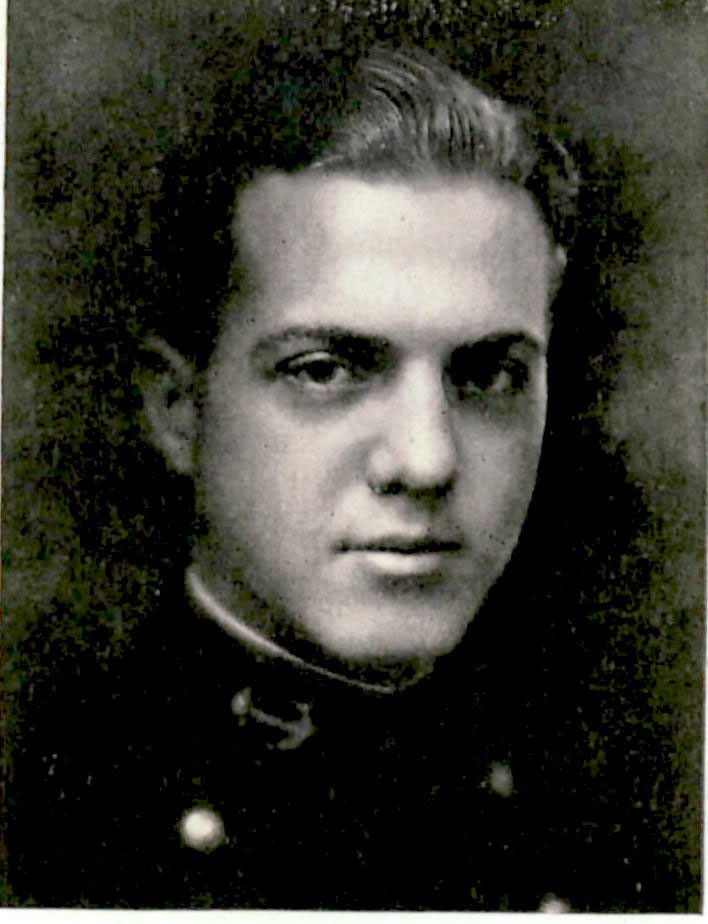 Robert Sylvester Bertschy was born in Lincoln, Nebraska, on July 7, 1900, son of A. J. P. Bertschy and Cecilia Helen (Spratt) Bertschy. He attended public schools in Omaha, Nebraska, and entered the US Naval Academy, Annapolis, Maryland, on June 8, 1920. As a Midshipman he was a member of the Naval Academy Soccer and Lacrosse Teams. He was graduated and commissioned Ensign on June 5, 1924, and through subsequent promotions attained the rank of Captain, to date from July 10, 1943.

After graduation from the Naval Academy, he was assigned for a year to USS Idaho and served as a junior officer in the Engineering Department of that battleship, a unit of Battleship Division 4, Battle Fleet, in the Pacific. From July 1, 1925 to November 1, 1928 he had engineering duty on board USS J. F. Burnes, of Destroyers, Battle Fleet, and for ten months thereafter was First Lieutenant of USS Vega, a cargo ship of Naval Transport Service, operating in the Atlantic.

Returning to the Naval Academy in September 1929, he was assigned for four months to the Athletic Department, coaching soccer. From January 1930 to July 1931 he served as Gunnery and Division Officer on board USS Milwaukee, a unit of Cruiser Division 3, Scouting Force. He then had a year’s instruction (General Line Course) at the Naval Postgraduate School, and in July 1932 reported to the Bureau of Navigation, Navy Department, Washington, DC, where he was assigned to the Training and Morale Division, as Assistant to the Division Head.

Detached from the Navy Department in June 1933, he assumed command of USS Seagull, tender for Submarine Squadron 4, Submarine Force, Pearl Harbor, TH. Completing that three year assignment, he returned to the United States to serve from July 1936 to May 1938 in the Operations Division of Headquarters, Twelfth Naval District, San Francisco, California. He joined USS Maryland in June 1938, and served until January 1940 as Assistant First Lieutenant of that battleship, a unit of Battleship Division 4, Battle Force.

On January 1, 1940 he reported as Executive Officer and Navigator of USS Sepulga, and remained on board that oiler operating in the Pacific, after the outbreak of World War II, until September 1942. He then returned to the Bureau of Naval Personnel and Control Complements until October 15, 1944. Ordered next to Tampa, Florida, he fitted out USS Saugus (LSV 4), and assumed command at her commissioning on February 22, 1945. He commanded that landing ship until September 9, 1946.

For a year he served a Commander Sub Group, Pacific Reserve Fleet, San Diego, California, after which, from October 1948 to May 1951 he was assigned to the Panama Canal, Cristobal, Canal Zone, first as Captain of the Port, and from July 1, 1950 as Chief, Navigation Division. On June 11, 1951 he joined the staff of Commander Western Sea Frontier, to serve as Inspector General and Chairman WAJC. Under orders of November 4, 1953, he was detached for duty as Commanding Officer, Naval Station and Naval Receiving Station, Treasure Island, San Francisco, California.