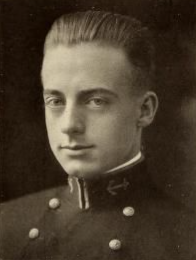 Adelbert Frink Converse was born in Wellsville, Kansas, on July 19, 1901, son of Asa Finch and May Frink Converse. He attended Wells­ville High School, and upon graduation in 1918 was appointed Midship­man to the US Naval Academy, Annapolis, Maryland, in July of that year. He was graduated and commissioned Ensign on June 3, 1922, and through subsequent promotions attained the rank of Captain to date from July 21, 1942. On January 1, 1948 he was transferred to the Re­tired List of the Navy and advanced to the rank of Rear Admiral on the basis of combat citations.

After graduation from the Naval Academy in June 1922, he reported to Commander Destroyer Squadrons, Pacific Fleet, and was assigned duty in USS Robert Smith. Transferring to USS Farquhar on September 16, the same year he served in that destroyer until March 1924. He had brief temporary duty with the Scouting Fleet, and from April 1924 until June 1927 served in battleships, first in USS New York, and the last ten months in USS Texas.

In June 1927 he returned to Annapolis for postgraduate instruction in Ordnance Engineering at the Naval Postgraduate School. He continued the course at the University of Michigan of Ann Arbor, and at the Naval Gun Factory, Navy Yard, Washington, DC, until May 1930.  He next had duty in connection with fitting out USS Houston at the Newport News (Virginia) Shipbuilding and Dry Dock Company, and served aboard that cruiser from her commissioning, January 15, 1931, until May 1933.

He assumed command in March 1944 of Destroyer Squadron 10, with his pennant in USS Ellyson. In that command he participated in anti-submarine warfare in the Western Atlantic and Mediterranean; and in the Invasion of Normandy in June 1944; and of Southern France in August of that year. For outstanding services in that command, he was awarded Gold Stars in lieu of the Second and Third Legion of Merit with Combat "V," and the Silver Star Medal. The citations follow, in part:

Gold Star in lieu of Second Legion of Merit: "For exceptionally meritorious conduct…as Commander Destroyer Squadron TEN, on board the USS ELLYSON, attached to the Anti-Submarine group composed of four vessels and aircraft in a relentless search for an enemy sub­marine which had attacked and torpedoed two ships of an Allied Con­voy…(He) effectively organized and employed his attack group, making contact with the enemy undersea craft after three days of extensive and determined search. Forcing the ship to the surface by repeated depth charges, five of the attacking units under his command sank it with the combined gunfire. His professional skill, tenacity and sound judgment were contributing factors in clearing the Mediterranean Sea for the safe passage of Allied shipping…”

Gold Star in lieu of Third Legion of Merit: "For exceptionally meritorious conduct…as Commander of Screening Destroyers during the invasion of Normandy, France, from June 6 to 15, and during the engagement with enemy coastal batteries in the area of the Port of Cherbourg, France, June 25, 1944...(He) skillfully directed the activities of his vessels in effectively screening the major ships and protecting the minesweepers engaged in the invasion. Subsequently, under his forceful leadership, the bombarding units of his command silenced many important hostile shore batteries and provided excellent support for United States Army troops at a crucial period in our vital offen­sive operations...(and he) contributed materially to the successful prosecution of the war in this highly strategic area.”

Silver Star Medal: "For conspicuous gallantry and intrepidity as Commander Destroyer Squadron TEN, embarked on the USS ELLYSON, in action against enemy forces during the amphibious invasion of Southern France, August 15 and 16, 1944. Directing his command in the delivery of accurate close-in gunfire on numerous enemy gun emplacements, troop and tank concentrations and other strong points, Captain Converse maneuvered his squadron to within 3,000 yards of the formidable enemy defenses and systematically neutralized or destroyed the hostile posi­tions. By his technical skill in coordinating the ships of his com­mand in spotting missions for capital ships and in covering landings, he contributed to the establishment and rapid extension of the Allied beachhead...”

Returning to the Bureau of Ordnance, Navy Department, in August 1944, he served there temporarily until named Assistant Chief of Staff for Operations on the staff of Commander in Chief, US Atlantic Fleet. Serving in that assignment from November 1944 to May 15, 1945 he was awarded a Gold Star in lieu of the fourth Legion of Merit, with the following citation: "For exceptionally meritorious conduct… dur­ing operations against enemy forces from November 1944 to May 1945.  Planning and conducting the operations of the forces of the Fleet with exceptional ability, Captain Converse rendered valuable assistance to the Commander in Chief in both the perfection of future plans and in the direction of current operations and, in addition, carried out a far-reaching offensive anti-submarine campaign…”

When relieved of staff duty in the Atlantic Fleet, he returned to the Navy Department, to serve in the Bureau of Naval Personnel from May 1945 until August 1947, after which he was relieved of all active duty pending his retirement on January 1, 1948.

In addition to the Silver Star Medal, Legion of Merit with three Gold Stars and Combat “V,” Rear Admiral Converse has the World War I Victory Medal; the American Defense Service Medal, Fleet Clasp; the European-African Middle Eastern Campaign Medal; the American Campaign Medal; and the World War II Victory Medal. He was also awarded the Croix de Guerre with Gold Star by the Government of France.