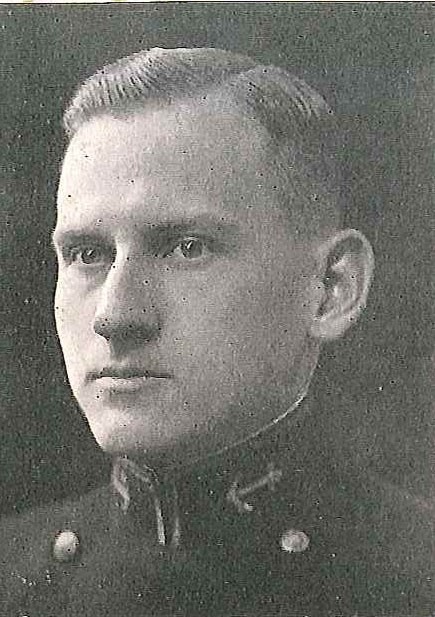 William Ashby Evans was born in Fernandina, Florida, on June 16, 1900, son of Mrs. Christine Evans of Jacksonville, and the late William Ashby Evans. He graduated from Florida Military Academy in 1918, and attended Marion Institute, Marion, Alabama the following year before entering the United States Naval Academy, Annapolis, Maryland, in 1920 from Florida. Graduated and commissioned Ensign in 1924, he advanced in grade attaining that of Captain to date from June, 1943.

Following his graduation in 1924, he had duty attached to USS West Virginia, then fitting out at New York, New York, and later designated flagship of Battleship and Division 5, Battle Fleet based at San Francisco. Transferred in the spring of 1925, to USS Wood, after serving four years in that destroyer he was assigned to USS Tennessee, of Battleship Division 5, Battle Fleet, on the West coast for duty. Early in 1930, he reported to the Naval Air Station, Pensacola, Florida, for flight training, and in December of that year he was designated Naval Aviator. Detached from that Station in the spring of 1931, he was assigned to the Fleet Air Base, Pearl Harbor, Territory of Hawaii for duty with aircraft squadrons. After a two year tour of duty there, he was assigned to Scouting Squadron 2b based on USS Saratoga, flagship of carrier Division 1, battle Force, on the West Coast of the United States.

Transferred to USS Langley in the summer of 1935, he served with Scouting Squadron 4b thereafter until a year later when he was named Aide and Flag Secretary to the Commander Aircraft, Battle Force and carrier Division 1, Battle Force, aboard USS Saratoga, flagship. In May, 1938 he reported for duty in the Navy Department, Washington, D.C., attached to the Flight Division, Bureau of Aeronautics. He was so serving when the United States entered the World War on December 8, 1941, and until April, 1942.

In May, 1942 he assumed duty as Air Officer of USS Suwanee, aircraft carrier escort (recently converted oiler), and thereafter participated in the North African invasion in November, 1942. The Presidential Unit Citation was awarded to the officers and men of the Suwanee and her attached Air Groups “For extraordinary heroism in action against enemy war service, including the North African operations.

When detached from USS Suwanee in December, 1942 the following year he had duty as Executive Officer successively in USS Breton and USS Croatan, carrier escorts. From December 20, 1943 to May 5, 1944 he served in the Navy Department, Bureau of Aeronautics, and thereafter returned to duty in the Pacific as Commanding Officer of the USS Currituck, seaplane tender. For his service in that command he was awarded the Legion of Merit with combat distinguishing device “V”, the citation stating in part, “For exceptionally meritorious conduct in the performance of outstanding services to the Government of the United States as Commanding Officer of USS Currituck in action against enemy Japanese forces in the Southwest Pacific and Philippine Islands area, from June 23, 1944 to September 2, 1945… The Currituck, under his forceful leadership, participated in the successful invasion of Leyte and Luzon…”

When relieved of command of the Currituck, he returned to the Navy Department, and reported December 1, 1945 to the office of the Chief of Naval Operations to serve temporarily while awaiting assignment in the Bureau of Naval Personnel. The following March he assumed duty as Senior Member of the Board of Review for Decorations and Medals, with additional duty involving flying. When detached from that assignment in April, 1947 he remained at the Bureau of Naval Personnel on duty until the following September, when he was ordered to the US Naval School of General Line, Newport, Rhode Island, as Executive Officer. He served in that assignment until May 15,1950, and on July 6 of that year he reported for duty as Naval Attaché and Naval Attaché for air, American Embassy, Buenos Aires, Argentina, with similar additional duty at the American Embassy, Asuncion, Paraguay.