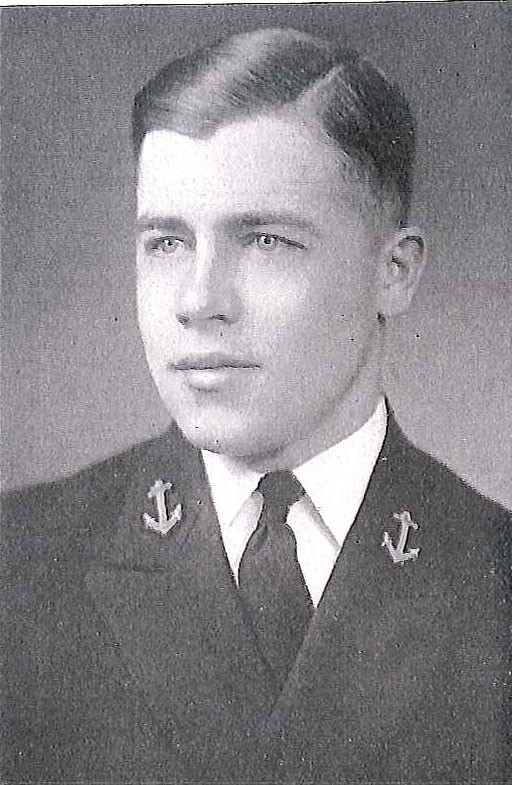 Commander Besson, born in Portland, Oregon, 30 August 1912, attended Phillips Academy, Andover, Massachusetts, before his entry to the US Naval Academy by senatorial appointment from the State of Oregon in 1931. While a Midshipman he was a member of the Academy track team and his class football team. Graduated and commissioned Ensign in June 1935, he was promoted to Lieutenant (junior grade), June 1938, to Lieutenant in January 1942 and received temporary promotions during World War II as follows: to Lieutenant Commander, May 1943, and to Commander, March 1944.

After graduation in 1935, Commander Besson was ordered to USS Richmond, a 7500 ton light cruiser, attached to Cruisers, Battle Force at San Diego, California. He was temporarily assigned to three months anti-aircraft gunnery training on USS Memphis. In August 1937, Commander Besson was detached by the Richmond and ordered to USS Claxton at Charleston, South Carolina, a destroyer preparing for service in Mediterranean waters. The Claxton served in the Mediterranean as part of Squadron 40T from November 1937 until March 1939. Detached from the Claxton in May 1939, Commander Besson served ten months on the Oil Tanker, USS Ramapo, supplying the US Asiatic Fleet from California ports.

In March 1940, he reported to the heavy cruiser, USS Pensacola, for duty in Hawaiian waters. He served in various capacities in the Gunnery Department, followed by a short tour as Assistant Engineer Officer and then Communications Officer. While he was serving on board, the Pensacola participated in several raids in company with Carrier Task Groups, the Battle of Midway, the Battle Santa Cruz Islands, the Third Battle of Savo, and was torpedoed with considerable loss of life at the Fourth Battle of Savo. After a long period of delay and with only one shaft operator, the Pensacola arrived at Pearl Harbor in March 1943 for repairs. Commander Besson was detached and reported for duty in Washington, DC.

As Officer in Charge of the Secretary of the Navy’s yacht, USS Sequoia, Commander Besson navigated the Potomac River with Secretary Knox living on board, during the summer of 1943. Detached from duty in Washington in October 1943 he reported for duty in connection with fitting out and commissioning a 2100 ton destroyer at Seattle, Washington. The USS Prichett (DD-561) was commissioned in January 1944 with Commander Besson as the Executive Officer. Several weeks were spent in shaking down in the San Diego area and then the Prichett proceeded westward to the battle area, taking part in carrier raids on the Truk Group.

In May 1944 Commander Besson was detached from the Prichett in Pearl Harbor and reported to USS Conway (DD-507), another 2100 ton destroyer of Squadron 22, coincidently moored alongside the Prichett at the time, as Commanding Officer. While serving on the Conway, he took part in the campaign of occupation of Saipan, Guam, and Tinian in the Marianas. Squadron 22 returned to the San Francisco Bay area for a brief intensive overhaul in August 1944 and was back on the firing line in Leyte Gulf in November 1944. The Conway participated in most of the landings of the US Forces in the Philippines until their consolidation.

The Conway also took part in amphibious operations at Brunei Bay and Balikpapan, Borneo with Commander Besson as Commanding Officer.

Commander Besson was detached from the Conway in July 1945 and reported to the Staff of Commander Destroyers Pacific Fleet as Assistant Operations Officer at Pearl Harbor. In June 1946 he was detached, served a short time in the office of the Deputy Chief of Naval Operations for Administration and then reported for duty on the Staff of Commander, US Naval Forces in Europe, now Commander, US Naval Forces Eastern Atlantic and Mediterranean, at his headquarters in London in September 1946 where Commander Besson still continues on duty.