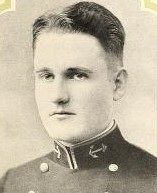 Floyd Charles Camp was born in Yellville, Arkansas, on December 4, 1904. He entered the US Naval Academy, Annapolis, Maryland, from Arkansas, in 1923. Graduated with the degree of Bachelor of Science in Electrical Engineering and commissioned Ensign on June 2, 1927, he subsequently advanced in rank to Captain, his date of rank March 20, 1945.

Following graduation from the Naval Academy in June 1927, he had duty afloat until 1929, serving successively in the USS Medusa, of Training Squadron 2, Fleet Base Forces; the USS Maryland, operating with Battleship Division 5, Battle Fleet; the USS Galveston, a unit of Special Service Squadron. He returned to the United States and early in 1930 was again ordered to sea, serving for four years on Asiatic Station, in the USS John D. Ford, a unit of Destroyer Division 43, operating on Yangtze Patrol.

Instruction in General Line duties at the Postgraduate School, Annapolis, Maryland, was followed by duty in the USS New Mexico, from 1935 to 1937, while that battleship operated as flagship of Battleship Division 3, Battle Force. Detached from the New Mexico, he reported to the Navy Department, Washington, DC, for duty in the Office of the Chief of Naval Operations. While there, he also served as a Naval Aide at the White House.

Late in 1939 he was ordered to Asiatic Station, and served first as Executive Officer and Navigator of the USS Mindanao, and later in the USS Marblehead, prior to and during the early period of World War II, until the summer of 1942, when he returned to the United States.

He was the Ribbon for, and a facsimile of the Navy Unit Commendation awarded the USS Marblehead for “outstanding heroism in action against enemy Japanese aircraft in the Java Sea Area on February 4, 1942…”

Fitting out the USS Glennon at the Federal Shipbuilding and Dry-dock Company, Kearny, New Jersey, he commanded that destroyer from her commissioning, October 8, 1942, until August 1943, while she operated on trans-Atlantic Convoy duty and later participated in the Sicilian Invasion.

He received a Letter of Commendation (with Ribbon) from the Secretary of the Navy for “outstanding performance of duty as Commanding officer of a United States vessels during the amphibious assault on the Island of Sicily from July 10 to 12, 1943…” The citation states that he “provided accurate and effective gunfire support for the initial landing of the Allied Assault Forces at Gela and …. Materially assisted in the rapid advance of our troops.

Returning to the United States, he reported to the USS Evans, building at the Gulf Shipbuilding Company Yards, Chickasaw, Alabama, and assumed command at her commissioning at Mobile, Alabama, on December 11, 1943. Arriving at Pearl Harbor, T.H., in March 1944, that destroyer joined Task Group 57.8, and conducted independent anti-submarine patrols in the Marshalls Islands, and participated in the Marianas Operations.

Relieved of command of the Evans on November 1, 1944, he reported for a tour of duty in the Training Division of the Bureau of Naval Personnel, Navy Department, where he remained throughout the war, and until March 1947. He next commanded the USS Nantahala (AO-60), and after two years in that command was ordered to the Naval Reserve Officers Training Corps Unit, from September 1948 to June 1951. In July 1951 he reported to the Office of the Chief of Naval Operations, Department of the Navy, preparatory to his assignment as US Naval Attaché and US Naval Attaché for Air to Belgrade, Yugoslavia. On February 19, 1952, he was ordered to duty as Inspector of Naval Recruiting and Naval Officer Procurement, First Naval Recruiting Area, New York, New York.