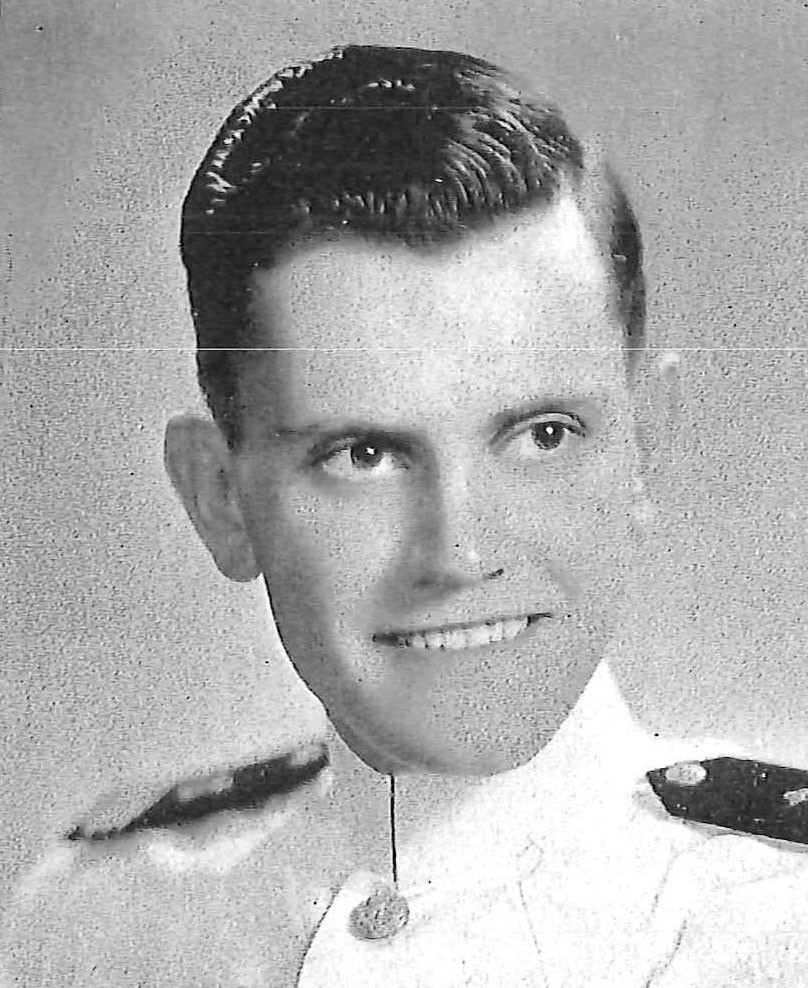 Kal Hal Cushman Castle was born in Peoria, Illinois, on December 26, 1921, son of  Karl E. and Helen (Minium) Castle. He attended Fenwick High School, Oak Park, Illinois and St. Mary’s College, Winoan, Minnesota, prior to entering the US Naval Academy, Annapolis, Maryland, on appointment from his native state in 1940. Graduated with the Class of 1944, on June 9, 1943 (course of instruction reduced to three years due to World War II) and commissioned Ensign, he subsequently advanced in rank to that of Captain, to date from September 1, 1963.

Following graduation from the Naval Academy in 1943, he had training at the Naval Air Operational Training Center, Jacksonville, Florida, until September of that year, when he joined  USS Phelps (DD-360) to serve as Electrical Officer and Assistant Gunnery Officer. The Phelps was credited with assisting in the sinking of the Japanese submarine RO-40 on February 15, 1944 during the Gilbert-Marshall Islands Campaign and was damaged by enemy coastal gunfire on June 18 and again on June 20, 1944, in the Marianas Campaign. She was the first United States ship to anchor in Japanese territorial waters in World War II.

Detached from the Phelps in October 1945, after the cessation of hostilities, he had instruction at the Gunnery Officers Ordnance School, Naval Receiving Station, Washington, DC, until February 1946, and the next month joined USS Bristol (DD-857) to server as Gunnery Officer until February 1947. He transferred in a similar capacity to  USS Dickerson (DD-708) in which he served until June 1948. He next had instruction in ordnance metallurgy at the US Naval Postgraduate School, Annapolis, Maryland, and from June 1950 to June 1951 continued the course at Carnegie Institute of Technology, Pittsburgh, Pennsylvania, from which he received the degree of Master of Science.

In July 1951 he joined USS Worcester (CL-144) for duty as Air Defense Officer, later Gunnery Officer, until February 1954 and the next month reported as Assistant Terminal Ballistics Officer at the Naval Proving Ground, Dahlgren, Virginia, where he remained until June 1965. He next served as Executive Officer of USS William M. Wood (DDR-715) and in January 1958 assumed command of USS Strong (DD-758). Detached from command of that destroyer in January 1959, he had instruction at the Armed Forces Staff College, Norfolk, Virginia; Nuclear Power Surface School, New London, Connecticut; and the Naval Reactors Division, Atomic Energy Commission, Washington, DC. Completing his training in April 1960, he was ordered to the Boston (Massachusetts) Naval Shipyard, where USS Long Beach (CG(N)9) was building, and became Executive Officer of that vessel when she was commissioned, September 9. 1961.

In February 1964 he reported as Executive Officer Afloat, Fleet Computer Programming Center, Atlantic, with headquarter at Dam Neck, Virginia Beach, Virginia and in July 1964 became Commanding Officer of USS Bainbridge(DLGN-25). In August 1966 he was ordered detached for duty on the Staff of Commander Operational Test and Evaluation Force, headquartered at the Naval Base, Norfolk, Virginia.