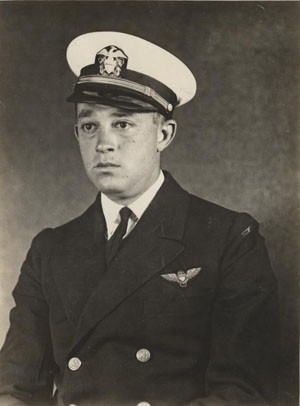 Clifton Albert Frederick Sprague was born in Dorchester, Massachusetts, on 8 January 1896, son of Mr. and Mrs. (Hazel Furlow) Sprague. He attended public schools in Milton; Roxbury Latin School, in Boston, Massachusetts; and one year at Norwich University, Northfield, Vermont, before entering the US Naval Academy, Annapolis, Maryland, in 1914, by senatorial appointment from Vermont. Graduated and commissioned Ensign in June 1917 with the Class of 1918, he advanced progressively in grade to that of Rear Admiral on 17 May 1943. Upon transferring to the Retired List of the Navy on 1 November 1951, he was advanced to Vice Admiral on the basis of combat awards.

After graduation in June 1917, he joined the USS Wheeling, operating on patrol duty in the Mediterranean. He remained on duty aboard that cruiser after the war until October 1919, when he transferred to the destroyer Manley. The following December he reported to the Naval Training Station, Hampton Roads, Virginia, later at the Naval Training Station, Newport, Rhode Island, in connection with assembling and training the crew for the USS Tennessee, then fitting out at the Naval Yard, New York, New York. Commissioned on 3 June 1920, he served aboard that battleship until the following November.

He reported to the Naval Air Station, Pensacola, Florida, for flight training. Completing the course, he was designated Naval Aviator in August 1921, and remained at Pensacola until March 1922 on duty. He then reported to Aircraft Squadrons, Atlantic Fleet, redesignated Aircraft Squadrons, Scouting Fleet, based on the USS Wright, and was assigned duty with Scouting and Bombing Squadron ONE, with Scouting Squadron ONE, before his detachment in November 1923.

Reporting for duty at the Naval Air Station, Anacostia, DC, he served as Executive Officer of that Station before being detached in February 1946, and while in that assignment he attended the Detroit News Air Transport Trophy Race held at Mitchell Field in October 1925, and was designated Reserve Pilot for the Navy Entries.

For two years, February, 1926-1928, he was on duty at the Naval Air Station, Naval Operating Base, Hampton Roads, Virginia, and had additional duty in connection with the arresting gear on the landing platforms of the aircraft carriers Lexington and Saratoga, then being fitted out. He had duty aboard the Lexington as Assistant Air Officer from February 1928 to April 1929. He then reported to the Naval Academy and was Executive Officer of Training Squadron 8D5 until November 1931. The following month he became Commanding Officer of Patrol Squadron EIGHT attached to the USS Wright. That squadron was transferred in April 1933 to Coco Solo, Canal Zone, and later to Pearl Harbor, TH.

From April 1934 until July 1936, he was Operations Officer at the Naval Air Station, Naval Operating Base, Hampton Roads, then reported for duty to the Newport News (Virginia) Shipbuilding and Dry Dock Company, for duty in association with fitting out the USS Yorktown, commissioned 30 September 1937. He was attached to that carrier as Air Officer until 13 June 1939.

Completing instruction at the Naval War College, Newport, Rhode Island, in September 1939, he reported to the Navy Yard, Puget Sound, Washington, for duty in charge of reconverting and fitting out the USS Patoka, formerly an oiler, as a seaplane tender. He assumed command when she was recommissioned, 10 November 1939. In August 1940 he transferred to command of the USS Tangier, seaplane tender, and was so serving when the Japanese attack upon Pearl Harbor, TH on 7 December 1941, began the war in the Pacific. His ship was unharmed in the attack and her guns succeeded in shooting down three of the enemy air raiders.

In June 1942, when relieved of command of the Tangier, he reported for duty as Air Officer on the Staff of Commander, Gulf Sea Frontier, headquarters in Miami, Florida, serving in that assignment until March 1943. Between April and October 1943 he was Commander Naval Air Center, Seattle, Washington, with additional duty as Commander, Naval Air Station, Seattle. He was assigned temporary duty at the Navy Yard, Boston, Massachusetts, to assist in fitting out the new USS Wasp. He assumed command on 24 November 1943 when that carrier was commissioned, and took her on a shakedown cruise to South America before joining the Pacific Fleet. Under his command the Wasp participated in the raids on Marcus and Wake Islands in May 1944, and in June assisted in the capture, occupation and defense of Saipan, Tinian, and Guam. Her planes of Air Group FOURTEEN, in company with other Fleet aircraft, attacked a Japanese force of three carriers, two battleships, two light cruisers, and numerous escorts and oilers, which had been reported 220 miles distant. When the planes returned after dark, the Wasp, with other fleet units, in accord with the now famous orders issued by the late Admiral Marc A. Mitscher, USN, broke out her lights to guide the aircraft in a most hazardous landing.

He was awarded the Legion of Merit with combat distinguishing device, 'V,' 'For exceptionally meritorious conduct' in operations from 19 May to 28 June 1944. He is also entitled to the ribbon for and facsimile of the Navy Unit Commendation awarded the officers and men of the USS Wasp.

Transferred in August 1944 to duty as Commander, Carrier Division TWENTY-FIVE, he served subsequently as Commander of Task Unit 77.4.3, and Commander Support Carrier Units. He was awarded the Navy Cross, and Gold Stars in lieu of a second and third Legion of Merit with Combat 'V,' the citations in part stating:

Navy Cross: 'For extraordinary heroism as Commander of Task Unit SEVENTY SEVEN POINT FOUR POINT THREE, while those six Escort Carriers were engaged in furnishing aerial support to our Amphibious Attack Groups landing troops on the shores of Leyte Gulf, Philippine Islands from October 18 to 25, 1944. With his ships constantly under fierce attack from enemy surface vessels and intercepting aircraft during the battle off Samar Island, on October 25 (he)...continued to direct repeated aerial strikes and torpedo attack against the hostile surface units...By his aggressiveness and courage, (he) was in large measure responsible for the success of our operations to force the enemy from this area...'

Gold Star in lieu of the second Legion of Merit, Combat 'V:' 'For outstanding services...as Commander Carrier Division TWENTY FIVE during our amphibious landings on Morotai, September 15, 1944. By his skillful coordination of combat air patrols with the action of surface units, (he) was instrumental in enabling our amphibious forces to land with a minimum of casualties...'

Gold Star in lieu of third Legion of Merit, Combat 'V:' 'For exceptionally meritorious conduct...as Commander Support Carrier Units in operations against Japanese forces at Iwo Jima, Volcano Islands; the Ryukus; and Sakashima Gunto, from February 16 to May 19, 1945. Working tirelessly during this critical period, air groups attached to escort carriers under his brilliant and courageous leadership provided efficient cover for our surface units carrying out bombardments, minesweeping and underwater demolition operation...and striking carrier air groups were synchronized with other elements of the assault forces for maximum striking power, despite extremely adverse weather conditions and relentless attack by enemy aircraft...'

The Presidential Unit Citation was awarded Task Unit 77.4.3, which he commanded during the Battle off Samar, with the USS Fanshaw Bay as his flagship.

After the cessation of hostilities in August 1945, he had successive temporary commands in the Pacific Fleet, until 15 February 1946 when he reported to the Commander Joint Army-Navy Task Force ONE organized for participation in the summer of 1946 in the atomic bomb tests in the Pacific. He served as Commander, Joint Task Group ONE POINT ONE POINT TWO, and Commander Navy Air Group, Joint Task Force ONE, with the USS Shangri-La as his flagship. He was awarded the Gold Star in lieu of a fourth Legion of Merit, the citation, in part, stating: '...(He) soundly prepared the Navy Air Group for its difficult duties in the CROSSROADS PROJECT and ably commanded that group during the...tests. Training the operating personnel to follow the intricate Air Plan necessitated by rigid radiological safety provision in an operating area of tremendous potential danger, as well as in control procedures, he enabled his group to perform unprecedented missions...both in the air and at shore instillations...' 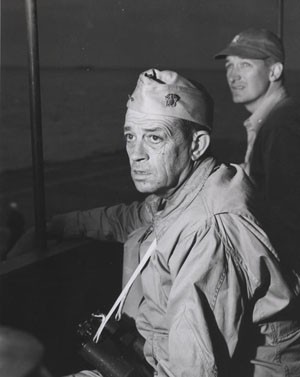 Returning to the United States following the completion of that duty, he reported in August 1946 to duty as Chief of Staff of Naval Air Basic Training, Corpus Christi, Texas. On 16 January 1948 he was redesignated Commander Naval Air Advanced Training, Subordinate Command, at Corpus Christi. Ordered relieved of that duty, he reported as Commander Carrier Division SIX in May 1948. On 11 January 1949 he was on the West Coast, and remained until ordered transferred, in March 1950, to duty as Commandant 17th Naval District, Kodiak, Alaska, with additional duty as Commander, Alaskan Sea Frontier. He was so serving when relieved of active duty pending his retirement on 1 November 1951. He died at the Naval Hospital, San Diego, California, on 11 April 1955.