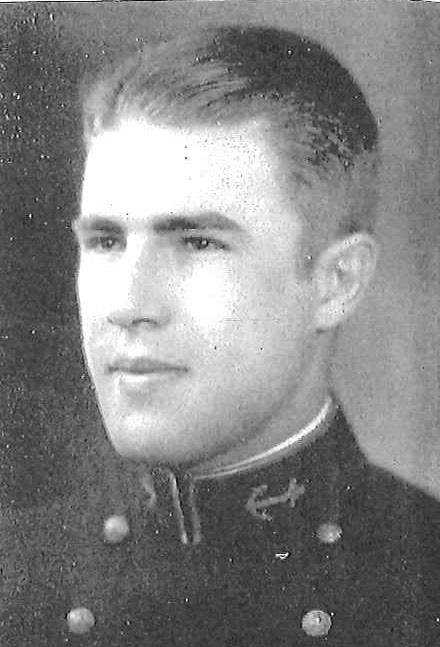 William Jackson Catlett, Jr., was born I Denver, Colorado on April 17, 1909, son of William J. Catlett and Minnie Dora (Mullen) Catlett. Educated in seven states, he was graduated third in his class (1926) at Canton (Mississippi) High School; attended Millsap College two years, and was appointed to the US Naval Academy, Annapolis, Maryland, from the State of Mississippi, in 1928. As a Midshipman he played Class football and basketball, belonged to the Trident Literary Society; was in the Trident Staff, and was Business Manager of the Trident in 1932. Graduated and commissioned Ensign on June 2, 1932, he subsequently attained the rank of Captain, his date of rank July 1, 1952.

Following graduation from the Naval Academy in 1932, he served almost three years aboard USS Colorado. During that time he qualified in Engineering Gunnery Commination duties, served eleven months as the Assistant Navigator and eight months as a Gunnery Observer in VO Squadron 4B. Early in 1935 he reported to the Naval Air Station, Pensacola, Florida, where for a year he was a member of the flight class. When detached, he was assigned to USS Vega, and in February 1937 was transferred to USS Henley for further duty at sea.

Returning in August to the Naval Air Station, Pensacola, Florida, he was Navigational Instructor there, commissioned the Navigation Department at the Naval Air Station, Corpus Christi, Texas, and in September 1941 was ordered to the Asiatic Fleet. There he served successfully as Executive Officer and Navigator of USS Childs and USS Peary in the Asiatic war area. He received a Letter of Commendation, with Ribbon, from the Secretary of the Navy, including the following: “On December 28, 1941 (he) assisted the Captain in effectively maneuvering the USS Peary during a three hour sustained attack by four enemy four engine bombers and two twin engine torpedo planes, b his alert and courageous observation and reports of the enemy’s tactics, without which it is probable the Peary could not have maneuvered to escape damage…” During 1942 he served on the staff of Commander Naval Forces Western Australia.

In 1943 he returned to the United States for duty in the Officer of the Center of Naval Operations, Navy Department, Washington, DC. There he had navigation, research and development duties in the Officer of the Director of Aviation Training, and the supervision of approximately one hundred navigation training schools ranging from flight preparatory courses to advanced fleet operations. In June 1945 he qualified and was designated a Naval Aviation Observer (Navigation) at the Naval Air Navigation School, Clinton, Oklahoma. From June 1945 to April 1946 he served as Officer in Charge of Project Electra at the Naval Air Station, Quonset Point, Rhode Island.

He next reported in May 1946 to the General Line School, Newport, Rhode Island, where as a staff member he develop the Navigation Course for Officers attending that school. Detached from the General Line School in June 1947 for sea duty, he served as the Executive Officer, USS Okaloosa (APA 219), until June 1948.

From July 1948 to April 1951 he served on the Staff of Commander Military Air Transport Service as Chief Navigator and Chief of Training. He was officially commended for his performance of duty in connection with the Berlin Airlift and NATS expansion training program. In May 1951 he joined USS Hamul (AD-20), and severed as Executive Officer for a year.

In June 1952 he was ordered to command USS Diphda (AKA 59). After serving sixteen months as Commanding Officer, he was officially commended by Commander Service Squadron Three for leadership in developing the Diphda Training Program. He served as Commanding Officer, Recruit Training Command at the Naval Training Center, Bainbridge, Maryland from November 1953 until August 1957, when he was ordered to duty in the Bureau of Naval  Personnel, Navy Department. He remained here until he was transferred to the Retired List of the US Navy, effective July 1, 1958. Upon his retirement he was advanced to the rank of Rear Admiral on the basis of a combat award.