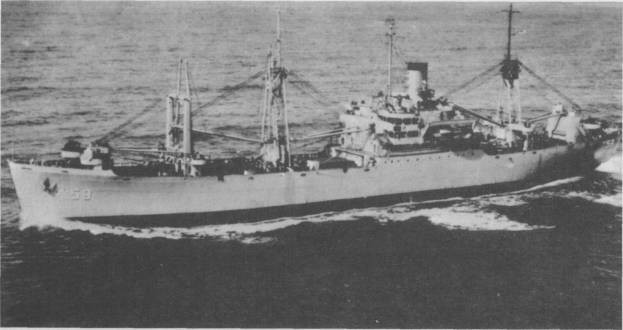 A star in the constellation Cetus.

Diphda (AKA-59) was launched 11 May 1944 by Federal Shipbuilding and Dry Dock Co., Kearny, N.J., under a Maritime Commission contract; sponsored by Mrs. Anna Rosenberg; transferred to the Navy 7 July 1944; and commissioned the next day, Lieutenant Commander R. C. Willson, USNR, in command.

Diphda sailed from Norfolk 15 August 1944, loaded cargo at Pearl Harbor from 4 to 21 September, then sailed to New Guinea for practice landings. On 4 January 1945 she departed Noemfoor Island for the invasion at Lingayen Gulf. Returning to Manus 24 January, she loaded landing craft to replace those transferred at Lingayen Gulf, then loaded cargo at Wakde Island for San Pedro Bay, Leyte, where she arrived 10 February.

After training exercises in the Philippines until 27 March 1945, Diphda sortied for the invasion of Okinawa, discharging her cargo in the transport area from 1 to 10 April. She returned to Pearl Harbor 25 April for voyage repairs and alterations, then continued to the west coast, arriving at San Francisco 18 June. She voyaged to Pearl Harbor carrying ammunition from 8 July to 5 August, then sailed from San Francisco 13 August with cargo for Manus and Samar. She carried Army cargo to Wakanoura Wan, Honshu, in support of the occupation of Japan, then embarked homeward bound servicemen at Okinawa, returning with them to Portland, Oreg., 29 November.

Between 11 January and 22 May 1946 and again between 28 November 1946 and 17 May 1947, Diphda served in the Far East, carrying cargo to Guam, Okinawa, and Chinese ports. She transported cargo for the Second Arctic Expedition to Point Barrow, Alaska between 9 July and 11 October 1947, then performed similar service between west coast ports occasionally cruising as far west as Guam, Pearl Harbor, and Saipan. In both 1949 and 1950, her cargo duty took her to the east coast and between 26 May and 20 June 1950, she called at Whittier and Kodiak, Alaska.

With the outbreak of hostilities in Korea Diphda was assigned to Service Force, Pacific, for duty as an ammunition ship. She made an emergency delivery of ammunition at Pusan, Korea, and offloaded the remainder of her cargo at Yokosuka before returning to San Francisco 12 September 1950. Six days later she got underway for an extended tour in Korean waters during which she carried ammunition between depots in Japan and Korea and to combat units and ships. On 26 December she replenished St. Paul (CA-73) at sea. Diphda returned to San Francisco 29 October 1951 for overhaul.

From 5 February to 11 November 1952 Diphda served with the Military Sea Transportation Service making shuttle runs from the west coast to the western Pacific, shuttling between Oakland, Calif., and Japanese ports. Except for service as station fleet issue ship at Sasebo from 12 May to 27 October 1954, Diphda continued this duty until 2 December 1955. Diphda was placed out of commission in reserve at San Diego 11 May 1956.