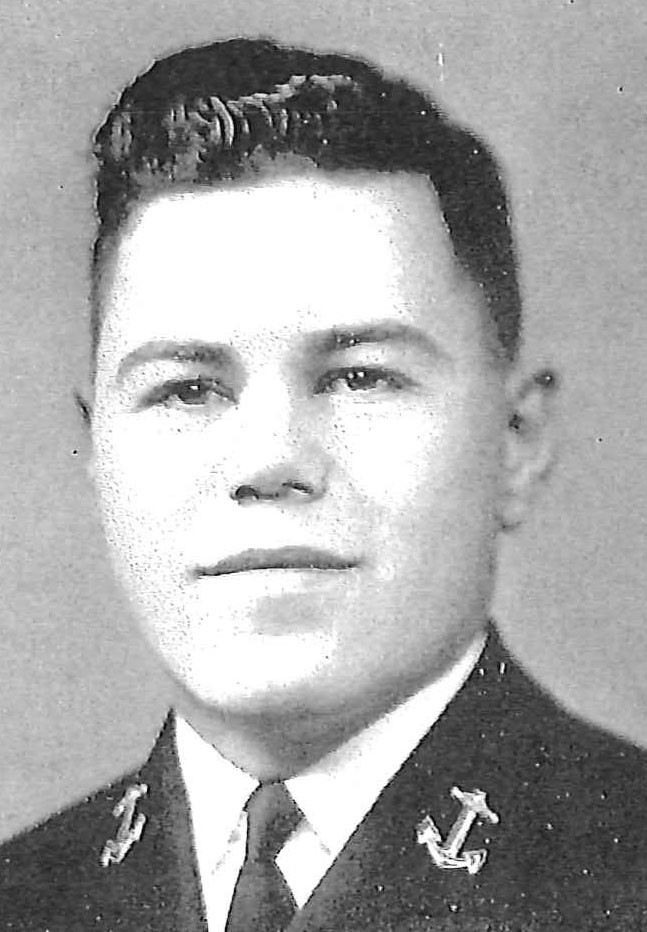 John Dawson Chase was born in Washington, DC, on April 4, 1919, son of Roy E. and Margaret E. (Dawson) Chase, both now deceased. He attended East Denver (Colorado) High School and in 1936 entered the US Naval Academy, Annapolis, Maryland, on appointment from the State of Colorado. Graduated with distinction, fourteenth in a Class of four hundred and fifty-six members, and commissioned Ensign on June 6, 1940, he subsequently attained the rank of Rear Admiral, to date from August 1, 1969.

Following graduation from the Naval Academy in 1940, he joined USS Saratoga (CV-3) and was serving in that aircraft carrier when the United States entered World War II, December 8, 1941. He subsequently saw action during the Guadalcanal- Tulagi landings; capture and defense of Guadalcanal; operations in the Eastern Solomons, Treasury-Bougainville, Gilbert Islands, Marshall Islands; and the raids on Sabang and Soerabaja. In June 1944 he transferred to USS Guam (CB-2) and while on board participated in the Third and Fifth raids in support of Okinawa Gunto and the Third Fleet operations against Japan. In July 1945 he was detached from that cruiser for instruction at the Postgraduate School, Annapolis, Maryland. He continued instruction from 1946 until August 1948 at the Massachusetts Institute of Technology, Cambridge from which he received the degree of Master of Science.

Assigned next to USS Coral Sea (CVB-43), he had duty in that aircraft carrier until March 1950, when he became Executive Officer of USS Hollister (DD-788). “For meritorious achievement… from August 15, 1950 to March 28, 1951, while engaged in combat operations in Far Eastern waters in support of the United Nations action in Korea and on the Formosa Straits Patrol….” He was awarded the Navy Commendation Medal.

From August 1951 to June 1953 he had duty in connection with fire control research and development in the Bureau of Ordnance, Navy Department, Washington, DC, after which he was a student at the Armed Forces Staff College, Norfolk, Virginia. In February 1954 he assumed command of USS Frank E. Evans (DD-754), which operated in Far Eastern waters and in May 1956 returned to the Bureau of Ordnance, where he was concerned with fleet ballistic missile fire control. He remained there until August 1959 and the next month reported for instruction at the Industrial College of the Armed Forces, Washington, DC he was Commander Destroyer Division One Hundred Ninety Two during the period July 1960 to July 1961 and for outstanding service in that capacity was awarded a Gold Star in lieu of the Second Navy Commendation Medal. The citation in part:

“For meritorious achievement in connection with the explosions and fire on board the gasoline-laden tanker, SS Kwang Lung, in Kaohsiung Harbor, Taiwan, on the morning of April 5, 1961… Displaying outstanding leadership and diplomatic skill in controlling the local firemen and civil authorities, he effectively directed the combined fire-fighting efforts of Chinese and American personnel until the fire brought under control and extinguished…”

In January 1965 he assumed command of USS Boston (CAG 1) he is entitled to the Ribbon for, and a facsimile of the Navy Unit Commendation awarded Task Force Sixty-Five, of which the Boston was a unit, for services in support of salvage and recovery operations for a missing nuclear weapons off Palomares, Spain. In March 1966 he joined the Staff at the Naval War College, Newport, Rhode Island, as Director of the School of Naval Warfare. “For meritorious service from March 1966 to July 1968…” He was awarded a Gold Star in lieu of the Third Navy Commendation Medal for his success”… in enriching professional military education in the Navy…”

In July 1968 he assumed command of the Naval Weapons Laboratory, Dahlgren, Virginia, and in July 1969 reported as Commander Cruiser-Destroyer Flotilla Four. In May 1970 he was ordered detached for duty as Deputy Commander of the Military Sea Transportation Service and Chief of Staff to the Commander Military Sea Transportation Service (redesignated on August 1, 1970 Military Sealift Command), Washington, DC. In November 1971 he became Commander of that activity with additional duty from July 1972 as Assistant for Naval Control of Shipping Matters in the Officer of the Chief of Naval Operations.