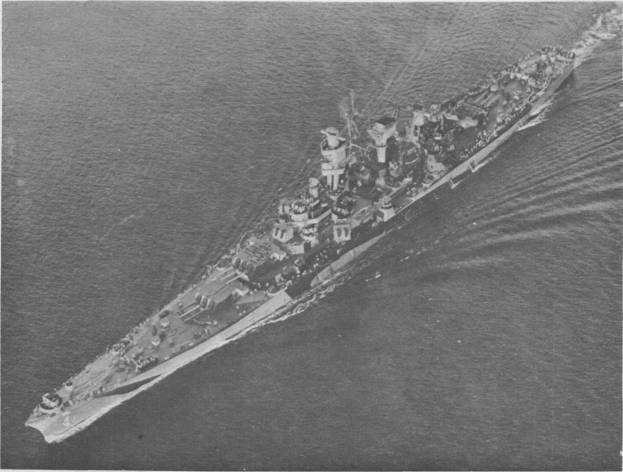 After shakedown off Trinidad Guam departed Philadelphia 17 January 1945 and joined the Pacific Fleet at Pearl Harbor 8 February via the Canal Zone. Shortly thereafter Guam was visited by Secretary of the Navy Forrestal. Clearing Pearl Harbor 3 March Guam sailed into Ulithi 13 March where she joined forces with her sister ship Alaska and other fleet units to form another of Admiral Marc Mitscher's famed task groups.

Sortie was made from Ulithi next day and Admiral A. W. Radford's Task Force 58, one of the most powerful task forces in naval history, proceeded to vicinity of Kyushu and Shikoku, arriving the morning of 18 March. In her group sailed some of the most gallant ships ever to go in harm's way: carriers Yorktown, Intrepid, Independence, and Langley; battleships Missouri and Wisconsin; cruisers Alaska, St. Louis, San Diego, Flint; and 15 destroyers in the screen. Guam's battle debut soon came. The fight began with five kamikaze attacks on the carriers. Guam's guns were directed at the raiders. During this first battle, the carriers Enterprise and Intrepid, both in Guam's force, were damaged but continued to operate. Enterprise took a bomb hit near her island structure; a suicide plane crashed Intrepid's flight deck aft and glanced off and plunged into the sea. Continued air attacks during the afternoon resulted in the destruction of four enemy planes by Guam's group, one of which she splashed. The next afternoon Guam was despatched to escort damaged Franklin from the combat area. This lasted until 22 March.

After replenishing Guam rejoined Task Group 58.4 and departed for combat area in vicinity of Okinawa Gunto, Japan. On the night of 27 to 28 March 1945 Admiral P. S. Low's Cruiser Division 16 in Guam conducted bombardment of the airfield on Minami Daito. Then until 11 May Guam supported carrier operations off the Nansei Shoto.

After repairs and replenishment at Ulithi Guam again departed for the waters east of Okinawa, as a unit of Admiral Halsey's 3d Fleet, Task Group 38.4. Here she continued to support the carriers launching fighter sweeps over the Kyushu airfields. On 9 June Guam, Alaska, and five destroyers conducted a 90-minute bombardment of Okino Daito. Course was then set for Leyte Gulf, arriving San Pedro Bay 13 June after almost 3 months of continuous operations in support of the Okinawa campaign.

Guam now got a new assignment as flagship of Cruiser Task Force 95, composed of large cruisers Guam and Alaska, four light cruisers, and nine destroyers. This force steamed into the East China and Yellow Seas between 16 July and 7 August 1945 on a shipping raid. Direct results were few, but the fact that a surface sweep of Japan's home waters could be made without harm proved the overwhelming dominance and mobility of American sea power. Guam's group retired to Okinawa 7 August.

A few days later Guam became the flagship of Rear Admiral Low's North China Force and circled the Yellow Sea parading American naval might before the major ports of Tsingtao, Port Arthur, and Darien. She then steamed into Jinsen, Korea, 8 September 1945 to guarantee occupation of that liberated country. Guam departed Jinsen 14 November and reached San Francisco 3 December landing a contingent of Army troops for discharge. Clearing San Francisco 5 December 1945, Guam arrived Bayonne, N.J., 17 December. She remained there and decommissioned 17 February 1947; Guam berthed with the New York Group, Atlantic Reserve Fleet until 1 June 1960 when her name was struck from the Navy List. She was sold for scrapping 24 May 1961 to the Boston Metals Co., Baltimore, Md.