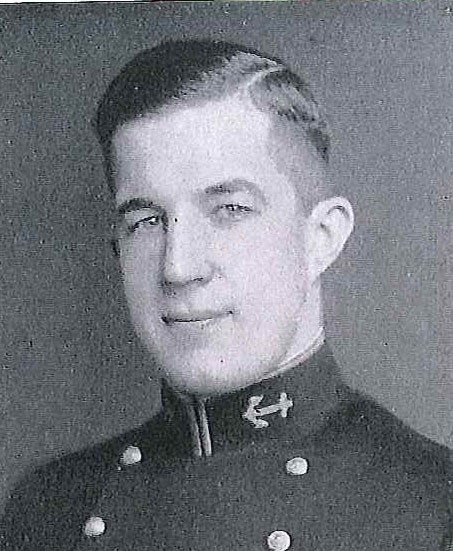 William Nolin Deragon was born in Albany, New York, on March 28, 1911, son of W. J. and Virginia Nolin Deragon. He was graduated from Albany High School and attended Werntz Preparatory School before entering the US Naval Academy in 1930. As a Midshipman he was a member of the Crew. Graduated and commissioned Ensign on May 31, 1934, he subsequently advanced to the rank of Captain, his date of rank July 1, 1953.

After graduation from the Naval Academy, he had successive service in USS Louisville, flagship of Cruiser Division 6, Scouting Force, and USS Sands, operating with Destroyers, Scouting Force. On June 30, 1937 he reported to the Submarine Base, New London, Connecticut, where he completed the course in submarine instruction. He then had duty aboard USS S-42, a unit of Submarine Division 11, based at Coco Solo, Canal Zone, from January 1938 until October 1939.

Ordered to the Navy Yard, Portsmouth, New Hampshire, he assisted in fitting out USS Seawolf, going aboard that submarine at her commissioning, December 1, 1939, for duty at sea. He served successively as First Lieutenant, Gunnery Officer, Navigator, and Executive Officer of the Seawolf, during the first part of World War II, participating in the Philippine Islands operation; action at Badoeng Strait; and in six war patrols.

He was awarded the Silver Star Medal: “For conspicuous gallantry and intrepidity as Assistant Approach Officer and Data Computer Operator of the USS Seawolf during action against enemy Japanese force on March 31 and April 1, 1943…” The citation continues: ”Subjected to intense depth charging by a force of hostile cruisers encountered off Christmas Island, Indian Ocean, Lt. Deragon was calm and courageous in the performance of his essential duties while his submarine pressed home three aggressive attacks at dangerously close range to the heavily screened Japanese warships. When serious mechanical failures threatened his ship near the end of a 50-day patrol, he greatly assisted in sustaining the crew’s high morale by his inspiring leadership and bearing, and thereby contributed immeasurably to the successful completion of an exacting assignment.”

He was also awarded a Gold Star in lieu of the Second Bronze Star Medal with Combat “V,” for “heroic service as Assistant Approach Officer of the USS Seawolf during her Eighth War Patrol in the Bonin Islands and Formosa Area from April 3 to May 3, 1943…(at which time he) rendered valuable assistance to his commanding officer in conducting successful attacks which resulted in the sinking of five enemy vessels, including one destroyer, for total of over 13,000 tons, and contributed materially to the success of his ship in evading severe enemy countermeasures…”

He is also entitled to the Ribbon with star for and facsimiles of the Navy Unit Commendation awarded the USS Seawolf for outstanding service during her Fourth and Seventh War Patrols.

Returning to the Submarine Base, New London, in July 1943, he attended Prospective Commanding Officers’ School, and in October that year, reported to the Portsmouth, New Hampshire, Navy Yard as Prospective Commanding Officer of USS Pipefish. Under his command, that submarine, from February 1944 to May 1945, participated in the following operations in the Pacific: Capture and occupation of Saipan; Battle of the Philippine Sea; raids on the Bonins; Leyte landings; assault and occupation of Okinawa Gunto; Third Fleet operations against Japan; and several war patrols. He was awarded the Bronze Star Medal with Combat “V,” and cited as follows:

“For meritorious service as Commanding Officer of the USS Pipefish during the Second War Patrol of that vessel in enemy Japanese waters from August 6, 1944 to September 27, 1944. Skillfully delivering torpedo attacks against enemy shipping, despite alert enemy escort and patrol craft in the area, (he) sank an enemy freighter of 4,000 tons and damaged two additional enemy ships totaling 4,700 tons…and brought his ship to port undamaged…”

He also received a Letter of Commendation, with Ribbon and Combat “V,” from the Secretary of Navy for meritorious service as Commanding Officer of the USS Pipefish during her Third War Patrol in the Pacific; and two Letters of Commendation each with Combat “V,” from the Commander in Chief, Pacific Fleet, for similar duty during the period May to July 1944, and during a rescue operation, successively.

Upon his return to the United States, he was again ordered to the Portsmouth Navy Yard, to serve this time as Assistant Captain of the Yard, and Assistant to the Administrative Officer. He conpleted that tour of duty in May 1948, and in June assumed command of the USS Charles H. Roan (DD-855), a unit of Destroyers, Atlantic Fleet. Detached in November 1949, he reported in January 1950 to Commander Military Sea Transportation Service, Navy Department, Washington, DC, where he served until July 1951 as Assistant Director, Maintenance and Repair Division.

He was a student (senior course) at the Naval War College, Newport, Rhode Island, from July 1951 until June 1952, and on July 11, 1952, assumed command of USS Salamonie (AO-26). In October 1953, he returned to the Navy Department for duty as Director of the Passenger Division with the Military Sea Transportation Service, and in December 1956 became Chief of Staff to the Commander Military Sea Transportation Service, Western Pacific Area with headquarters in Yokosuka, Japan.

In addition to the Silver Star Medal, the Bronze Star Medal with Gold Star and Combat “V,” the Commendation Ribbon with two Bronze Stars and Combat “V,” and the Navy Unit Commendation Ribbon with Star, Captain Deragon has the American Defense Service Medal, Fleet Clasp; the Asiatic-Pacific Campaign Medal with engagement stars; American Campaign Medal; World War II Victory Medal; and the National Defense Service Medal. He has also been awarded the Army Distinguished Unit Emblem for duty on board USS Seawolf in defense of the Philippines.