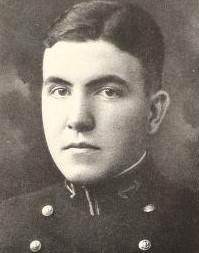 Walter Chilcott Ford was born on November 26, 1903, in Buffalo, New York, the son of John J. Ford and Mrs. Harriett Chilcott Ford. He attended South Park High School in his native city before his appointment to the US Naval Academy at Annapolis, Maryland, from New York in 1921. As a Midshipman he was a member of the basketball and tennis teams. Graduated and commissioned Ensign on June 3, 1925, he advanced progressively to the rank of Captain, to date from July 20, 1943. He was transferred to the Retired List of the US Navy on June 30, 1955, and advance to the rank of Rear Admiral on the basis of combat awards.

Following graduation from the Academy in 1925, he attended a summer course at the Massachusetts Institute of Technology, at Cambridge, and in September 1925 he joined the USS Utah. While attached to that battleship, he won the fleet tennis championship in singles for the year 1925-1926. Detached from the Utah in June 1926, he had instruction at the Naval Torpedo Station, Newport, Rhode Island, and in December 1926 reported to Commander, Destroyer Squadron Nine, subsequently serving consecutively in the destroyer Dale, Toucey, Converse, and Manley.

In September 1930 he was ordered to the USS Detroit, and remained aboard that vessel until June 1932. He received a Letter of Commendation from the Secretary of the Navy for meritorious service as Battery Officer during 1931-1932, when the Detroit was awarded the Battle Efficiency Pennant for light cruisers. From June 1932 to June 1934 he had duty in the Third Naval District, New York, New York, and during this period received commendatory mention from the Chief Hydrographer of the Navy for assistance in the development of the star identifier.

Following an assignment in the USS Medusa, he joined the Staff of Commander, Destroyer Squadron Three, as Communication Officer, and in June 1937 returned to shore duty as an Instructor in the Department of Seamanship and Navigation at the Naval Academy. Between June 1939 and June 1941, he served as Flag Lieutenant on the Staff of Commander, Cruiser Division Seven, USS Concord, flagship, after which he assumed command of the USS Perkins. Under his command, that destroyer participated in the Battle of the Coral Sea, the capture of Guadalcanal, and the Battle of Tassafaronga, and for his services he was awarded the Bronze Star Medal with Combat Distinguishing Device “V,” and Silver Star Medal. The citation follow in part:

Bronze Star Medal:  “For meritorious achievement as Commanding Officer of the USS Perkins during operations against enemy Japanese forces in the South Pacific from December 1941, to March 1943. During this prolonged period, (he) operated in forward areas with the Seventh Fleet and for various Aircraft Carrier Task Forces, participated in the attack by midget Japanese submarine in Sydney Harbor, the raid on Salamaus and Tulagi. Frequently subjected to enemy air attack while escorting and screening vessels in the Guadalcanal area from November 1942, to February 1943, (he) fought his ship gallantly against the attacking aircraft…”

Silver Star Medal: “For conspicuous gallantry and intrepidity…. During action against enemy Japanese Naval Forces in the Battle of Lunga Point, the night of November 30- December 1,1942. With his ship (the Perkins) the second in column of the van destroyer when Japanese surface forces steamed toward Guadalcanal in a last major attempt to reinforce beleaguered enemy troops on the island (he) promptly maneuvered for maximum strength to launch his devastating attack and, training his accurate gun and torpedo fire against the enemy contributed to the success of a bitterly fought engagement to drive the hostile force from the area. Subsequently returning to the scene to aid the Pensacola, which had been severely damaged during the furious action, he brought the Perkins close alongside the blazing vessel to assist in bringing the fires under control, and then led the crippled destroyer into Tulagi Harbor where he continued his efforts until the blaze was completely extinguished…”

He also received a Letter of Commendation, with authorization to wear the Commendation Ribbon, from the Commander in Chief, US Pacific Fleet, for services on May 7, 1942. While on command of the Perkins, assigned to a small group of ships operating to attack enemy ships.

Detached from command of the Perkins in March 1943, he was again assigned to the Naval Academy, serving this time until May 1945 as Secretary of the Academic Board. The following month he assumed command of Destroyer Squadron Twenty-Three, and in January 1946 transferred to command of Destroyer Squadron Two. Returning to the United States in December 1947, he became Aide to the Under Secretary of the Navy, Navy Department, Washington, DC, and in May 1948 reported as Executive Director of the Central Intelligence Agency, Washington, DC. In June 1949 he joined the Staff of Commander Naval Forces, Eastern Atlantic and Mediterranean as Assistant Chief of Staff for Intelligence, and in January 1951 became Commander Service Squadron Four.

From January 1952 until October 1953 he headed the Tranortation and Petroleum Branch, Office of the Chief of Naval Operations, Navy Department, Washington, DC, after which he was Chief of the Program Planning Office. In that capacity he was engaged in the development of various shipbuilding and ship repair programs. On October 20, 1954 he was appointed Deputy Maritime Administrator and continued to serve in that capacity after his transfer to the Retired List of the US Navy on June 30, 1955 and until June 30, 1961. During that period, he played an important part in promoting the building of the first nuclear ship (N.S Savannah) and hydrofoil vessel (Dennison) as well as initiating the Merchant Ship replacement program for war built vessels. After his retirement from government service in 1961, he became Maritime Consultant for Cities Service Oil Company and several tanker corporations.

In addition to the Silver Star Medal, the Bronze Star Medal with Combat “V,” and the Commendation Ribbon, Rear Admiral Ford has the American Defense Service Medal, Fleet Clasp; American Campaign Medal; Asiatic-Pacific Campaign Medal with four engagement stars; the World War II Victory Medal; Navy Occupation Service Medal, Asia Clasp; and the National Defense Service Medal. In 1935 he was awarded the Cross of Naval Merit, First Class, from the Republic of Spain, for his efforts in the promotion of friendly international relations.