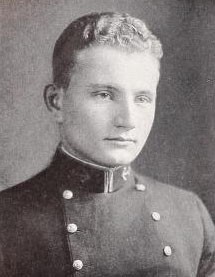 Albert Peyton Coffin was born in Philadelphia, in October 19, 1911, son of Albert Reeves and Kathryne Peyton Coffin. He attended Park School, Indianapolis, Indiana, and on appointment from Indiana entered the US Naval Academy, Annapolis, Maryland, on June 17, 1930. As a Midshipman he was member of the Naval Crew. Graduated and commissioned Ensign on May 31, 1934, he subsequently advanced to the rank of Captain, with date of rank July 1, 1953.

After graduation from the Naval Academy in 1934, he had three years sea duty as a junior officer in the USS West Virginia, flagship of Battleship, Battle Force. While on board that battleship he also served from December 1935 as an aircraft gunnery observer with Observation Squadron 4, attached there to. On June 29, 1937 he reported to the Naval Air Station, Pensacola, Florida, for flight training, and was designated Naval Aviator on April 12, 1938. In June he was assigned to Bombing Squadron 5, based on the USS Yorktown, and two years was transferred to the aviation unit of the USS Detroit.

Detached from the Detroit in January 1941, he had brief tours of shore duty at the Naval Air Stations, Pensacola, Florida, and Corpus Christi, Texas. In July 1942 he reported to Torpedo Squadron Ten, based on the USS Enterprise. “For extraordinary heroism in the line of his profession as Commander of a Torpedo Squadron of the USS Enterprise in combat against enemy Japanese naval forces in the Solomon Islands Area from November 13-15, 1942….” He was awarded the Navy Cross. The citation continues:

“Gallantry leading his squadron against a Japanese battleship of the Kongo class, Lieutenant Coffin launched a skillful and daring attack, and despite heavy anti-aircraft fire and an umbrella of enemy fighter, scored three torpedo hits, which stopped the enemy vessel and prevented it from shelling the aircraft installations of Henderson Field, Guadalcanal. After this brilliant achievement he again personally led subsequent attacks on major Japanese forces with highly successful results…”

Detached from command of Torpedo Squadron Ten in June 1943, he reported to Commander Fleet Air, West Coast, and in September of that year was assigned brief duty as Commanding Officer of Torpedo Squadron 19 of Fleet Air Group 19. In January 1944 he reported for a year’s duty in the Bureau of Ordnance, Navy Department, Washington, DC, after which he returned to the West Coast, and on January 24, 1945 was designated Commander Carrier Air Group 19, later redesignated Commander Attack Carrier Air Group 19. From December 4, 1946 until December 3, 1947 he served as Public Information Officer on the staff of the Commandant Twelfth Naval District.

On December 8, 1947 he reported to the Naval Air Station, Moffett Field, California, where for eighteen months he served on the staff of Commander Naval Air Transport Service, and later Commander Fleet Logistics Support Wings, Pacific. In June 1949 he was ordered to Valparaiso, Chile, for duty as a member of the US Naval Mission to Chile. Upon his return to the United States, he received orders to the Naval Air Station, Olathe, Kansas, where he had duty as Executive Officer of the Naval Air Technical Training Unit, from November 13, 1951 until July 25, 1952, and as Commanding Officer of that unit for a year thereafter.

He was a student at the Air War College, Maxwell Air Force Base, from August 1953 until June 1954, and during the year to follow, he was Commanding Officer of Air Transport Squadron 3. On July 20, 1955, he reported for duty on the staff of the US Naval Postgraduate School, Monterey, California.