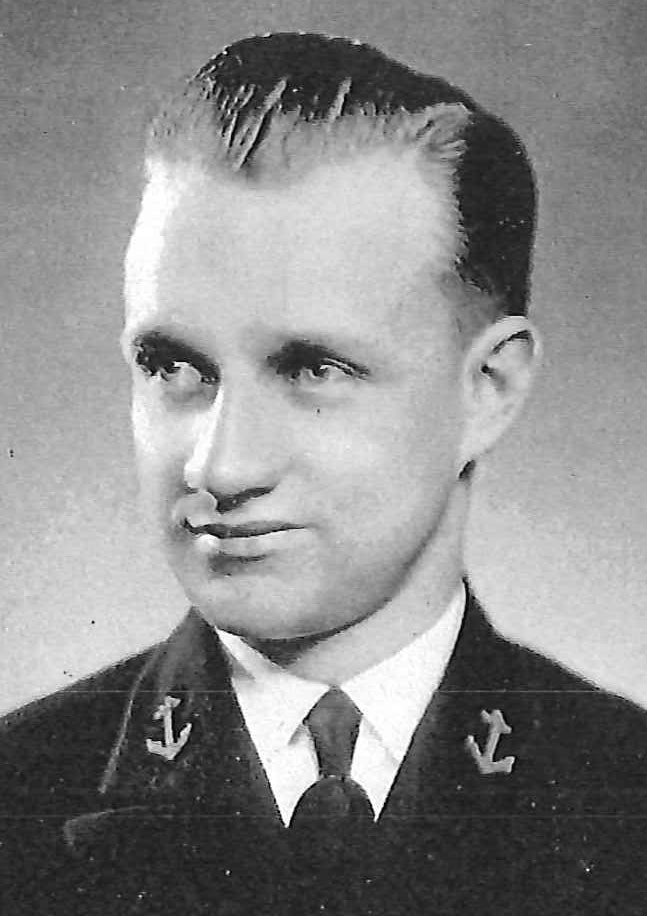 Born in New Bedford, Massachusetts, Briscoe Chipman graduated from the Naval Academy with the Class of 1935 and severed for the next five years in the cruise Chester. In 1940 he transferred to USS Madison and was serving in that destroyer when the United States entered World War II. While attached to the Madison he participated in escort of North Atlantic convoys; in operations with the British Home Fleet; escorted USS Wasp, which flew off Spitfires in relief of Malta; in action against two German Wolf Packs in defense of convoy UC-1 and in the first North African landing.

He saw action during the invasion of Sicily and Salerno as Commanding Officer of the destroyer Cole, 1934-1944, and in March 1944 became Training Officer at the Naval Training Center, Miami, Florida. Between January and December 1946 he had duty as Executive Officer and Commanding Officer of the attack transport Samuel Chase, after which he was assigned as Plans and Operations Officer on the Staff of Commander Amphibious Group 2. Early in 1949 he transferred to the staff of the Commander in Chief, US Atlantic Fleet to serve until September 1951 as Fleet Amphibious Warfare Officer and Fleet Operational Plans Officer.

After commanding the escort destroyer Eaton, he reported in April 1953 as Commander Escort Destroyer Division 42. In August 1954 he became Commanding Officer and Director of the Atlantic Fleet Antisubmarine Warfare Tactical School, Norfolk, Virginia and in December 1956 became Chief of Staff to Commander Carrier Division 14. Since February 1958 he has been Commanding Officer of the amphibious force flagship Taconic.

Legion of Merit:  “For exceptionally meritorious conduct…. As Commander of the Beach Identification Group of a Major Task Force during the amphibious assault on the mainland of Italy at the Gulf of Salerno on September 9, 1943. Preceding the assault waves, (he) skillfully and daringly made contact with the submarine which marked the approach position to the invasion beaches. After escorting the undersea craft clear of the beach, he placed guide boats with unerring accuracy in positions to mark the proper approaches to the shore for the assault landings… (thus contributing) in large measure to the success of the landing forces.”

Letter of Commendation: “For meritorious service as Training Officer at the US Naval Training Center, Miami, Florida from April 1944 to January 1946. During this period, Commander Chipman assisted his commanding officer with the training of more than 16,000 US Naval Officer, 32,000 US Naval enlisted men, 500 pre-commissioning units and 5 foreign naval missions, including 1000 Chinese. His exceptionally skill and devotion to duty were commensurate in every respect with the enormity of the task assigned him. As advisor to the commanding officer he showed extraordinary foresight in anticipating what the fleet would require of personnel and remarkable insight into the problems of training men to meet those requirements…”