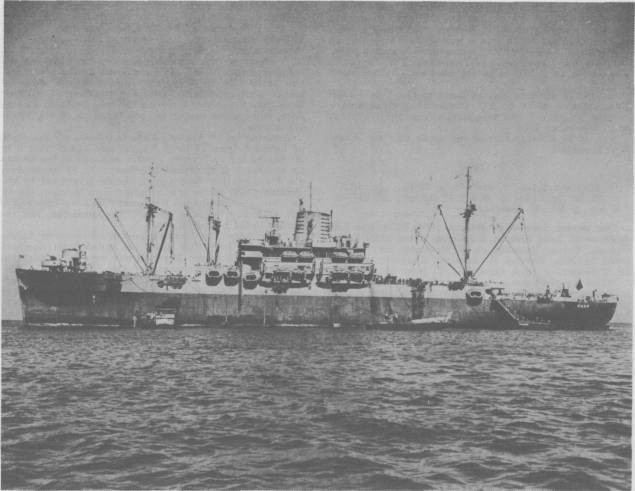 Caption: Samuel Chase (APA-26) recovering troops and vehicles after a landing exercise, late in 1943. A forward boom is lifting a 2-ton truck from an LCM, while troops climb a cargo net from another LCM abaft the superstructure. Other troops have an easier ascent from an LCVP near the stern, boarding by an accommodation ladder. The LCVP is marked as one of Samuel Chase's boat complement, the PA26-24 on her bow identifying her as Boat 24 from APA-26. Samuel Chase is painted in what was called a graded pattern, dark blue below a hypothetical horizon line and haze gray above. One or more radar antennas have been carefully airbrushed out by a censor.

Samuel Chase, a signer of the Declaration of Independence, was born on 17 April 1741 in Princess Anne, Somerset County, Md. He was admitted to the bar in 1761 and was a member of the Maryland Assembly from 1764 to 1784. In 1774, he became a member of the Maryland Committee of Correspondence and a delegate to the first Continental Congress, and served Congress intermittently until 1788 during which time he was a member of many important committees. After several years in private business, he became a judge in Maryland in 1788 and was appointed to the Supreme Court in 1796. Justice Chase died on 19 June 1811.

After shakedown along the Atlantic coast, Samuel Chase sailed from Hampton Roads on 18 September 1942, arriving at Belfast, N.I., with a troop convoy on 6 October. On 26 October, she sailed from Greenock, Scotland, as flagship for the landings at Algiers, part of the Allied invasion of North Africa. En route, she was narrowly missed by a torpedo in the same attack that disabled the transport, Thomas Stone. This was her first of several close brushes with disaster under persistent enemy air and submarine attack in the Mediterranean.

The first troops from Samuel Chase landed just east of Algiers shortly after midnight on 8 November, and she remained off the beach for three days before entering the harbor of Algiers. The transport sailed on 12 November with a convoy to the United Kingdom to pick up reinforcements, which were disembarked at Algiers on 6 December. She then sailed on 31 December for overhaul in the United States, arriving at Norfolk on 12 January 1943. She was reclassified APA-56 effective 1 February 1943.

Samuel Chase sailed from the United States on 5 March and disembarked troops at Oran on the 19th. During April, her boat crews underwent training on Algerian beaches and were joined by their ship on 24 May for additional training with the ship's full contingent of troops. On 9 July, Samuel Chase arrived off Gela, Sicily, for the Allied invasion of that island; and her troops landed in the initial assault early on the 10th. The transport retired from the beachhead for Algiers with wounded personnel on 12 July. On 9 August, she embarked new troops for amphibious training; and, on 9 September, arrived off Frume Sele, Salerno Gulf, where she landed her soldiers for the invasion of Italy. She departed Salerno a day later; and, after training French troops in landing techniques near Algiers between 22 October and 2 November, returned to the United States on 25 November for repairs.

After completion of repairs on 26 December, Samuel Chase conducted amphibious training on the east coast until departing Norfolk on 12 February 1944 for Glasgow, Scotland, where she arrived on 22 February to prepare for the invasion of Hitler's "Fortress Europe." Samuel Chase stood in towards the beaches of Normandy and landed her assault troops on Omaha Beach on 6 June. After picking up wounded soldiers, she returned to Weymouth, England, on 7 June. The ship sailed on 4 July for the Mediterranean; and, after embarking troops at Naples on 16 July, landed them in the assault on Southern France in the Bay of Pampelonne on 15 August. She then made several voyages in the Mediterranean transporting French personnel from Italy and Algeria to ports in Southern France before sailing from Oran on 25 October for overhaul at Boston, Mass., where she arrived on 8 November.

Ordered to the Pacific Fleet, Samuel Chase departed Boston on 15 January 1945 and reached Pearl Harbor on 6 February and arrived at Leyte, P.I., on 4 March. She began amphibious training on 14 March, but struck a shoal during training two days later. She then transferred her troops to Pitt (APA-223); sailed east; and arrived at San Francisco on 24 April for repairs. The transport sailed again on 19 June for the western Pacific; and, after brief stops en route, arrived off Okinawa on 24 July. She remained off the beach there under frequent enemy air attacks until sailing for Ulithi on 10 August.

After the Japanese surrender, Samuel Chase sailed to San Pedro Bay in the Philippines, embarked occupation troops there between 26 August and 2 September, and delivered them to Yokohama, Japan, on 8 September. She then returned to the Philippines for more troops, whom she disembarked on Hokkaido on 5 October. Returning to the Philippines, she embarked personnel of a Seabee battalion, which she landed at Tsingtao, China, on 1 November. Reporting for "Magic Carpet" duty on 15 November, the transport sailed from Tsingtao on 19 November and delivered a full load of homeward-bound troops at San Diego on 11 December. Coming under the control of the Naval Transportation Service, she made three more voyages to the western Pacific in the next six months, touching at Okinawa, Hong Kong, Yokosuka, Guam, Peleliu, and Majuro. The ship arrived at Norfolk, Va., on 21 July 1946 for inactivation, was decommissioned there on 26 February 1947, and was laid up in the James River. The transport was struck from the Navy list on 1 October 1958 and transferred to Maritime Administration custody on 11 February 1959. She remained in reserve in the James River until sold, on 9 May 1973, to the Consolidated Steel Corp. of Brownsville, Tex.