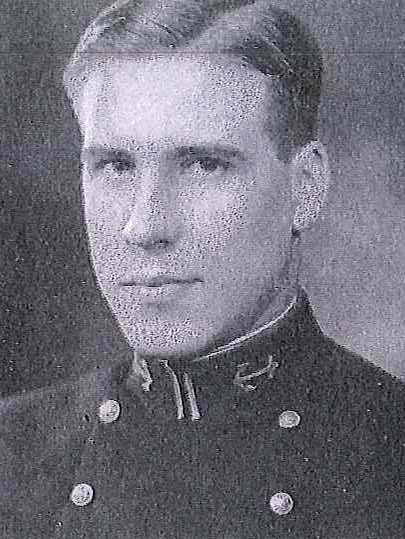 Samuel Bertolet was born on August 13, 1910, in Reading, Pennsylvania, son of Samuel E. and Alexandria Wilson Bertolet. He attended Reading High School and Lafayette College, Easton, Pennsylvania, for one and one half years, prior to entering the US Naval Academy, Annapolis, Maryland, from his native state in 1929. As a Midshipman he was a member of the soccer, swimming and lacrosse squads. Graduated and commissioned Ensign on June 1, 1933, he advanced progressively to the rank of Commander to date from January 1, 1944.

Following graduation from the Naval Academy in 1933, he joined USS Nevada. Detached from that battleship in 1936, he served until the next year on the staff of Commander Battleships, Battle Force. Between 1937 and 1939 he was assigned to the John D. Edwards, after which he had duty aboard USS Sirius. Transferred, in March 1940, to USS Pensacola, he continued sea service in that cruiser until ordered, in July 1941, to return to the United States.

He was assigned to the Office of the Vice Chief of Naval Operations, Navy Department, Washington, DC, until May 1943, and thereafter until July 1945 served with a Combat Intelligence Unit in the Pacific Area, in connection with radio intelligence. “For exceptionally meritorious conduct…while attached to the Division of Naval Communications, from February 14, 1942, to September 2, 1945…” he was awarded the Legion of Merit. The citation further states:

“Commander Bertolet rendered invaluable assistance in carrying out the vital operations of the Division of Naval Communications during a critical period in the history of our country. By his tireless efforts, outstanding professional ability and conscientious devotion to the fulfillment of exacting assignment, he contributed materially to the successful prosecution of the war…”

He is also entitled to the Ribbon for, and a facsimile of the Navy Unit Commendation awarded the United States Naval Communication Intelligence Organization for “distinguished service…during the period from December 7, 1941, to September 2, 1945. By untiring and self-sacrificing devotion to duty, the members (of this organization)…have rendered service vital to operations in all fields of combat and have contributed inestimably to the successful prosecution of the war…”

From December 1947 to August 1948 he was Commanding Officer of the Naval Communication Station, Racife, Brazil, after which he had consecutive duty until April 1950 in the Bureau of Naval Personnel, Navy Department, for brief time and at Headquarters, Potomac River Naval Command, Washington, DC. At the time of his death, October 7, 1951, at the Naval Hospital, Bethesda, Maryland, he was serving as Assistant to the Head of the Security Branch at the Naval Communications Station, Washington, DC.