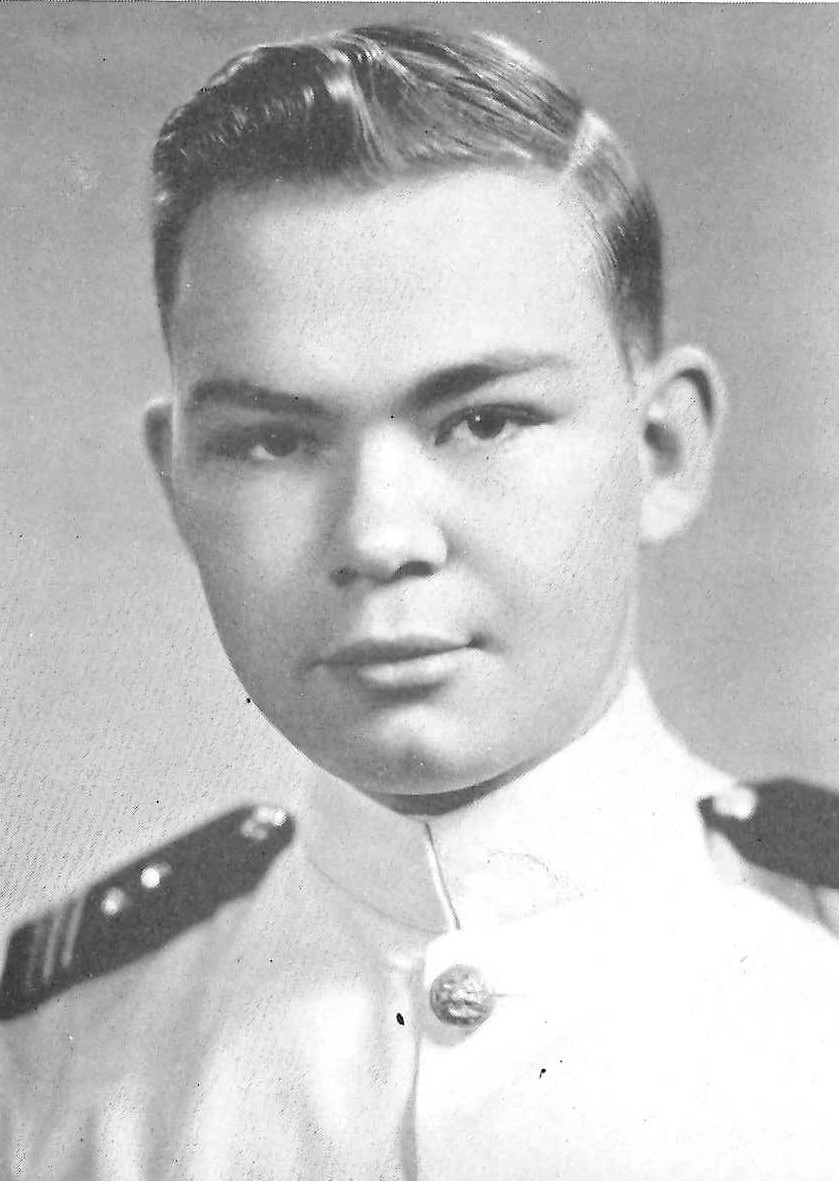 James Vincent Bartlett was born in Point Pleasant, West Virginia, on October 28, 1917, son of Ira S. and Blanche (Mitchell) Bartlett, both now deceased.  He attended Charleston (West Virginia) High School and Randles Preparatory School, Washington, DC, prior to entering the US Naval Academy, Annapolis, Maryland, on appointment from his native state in 1937.  Graduated with “distinction” on February 7, 1941, he was honorably discharged on June 7, that year for physical disability.  On June 30, 1942 he was commissioned Ensign in the US Naval Reserve and subsequently advanced in rank to that of Rear Admiral, Civil Engineer Corps, to date from August 1, 1968, having transferred from the Naval Reserve to the Civil Engineer Corps of the US Navy on November 15, 1947.

Following graduation from the Naval Academy in 1941, he remained there as an Instructor until June of that year, when he transferred to the Naval Training School, Dartmouth College, Hanover, New Hampshire, for similar duty.  Reporting in May 1943 for postgraduate instruction in civil engineering at Rensaaelaer Polytechnic Institute, Troy, New York, he received the degrees of Bachelor of Civil Engineering in October 1944 and Master of Civil Engineering in June 1945.  He had further training at the Naval Construction Battalion Training Center, Davisville, Rhode Island, during the period August to October 1945, after which he served as Executive Officer at the Advanced Base Construction Depot, Pearl Harbor, Territory of Hawaii.  In June 1946 he became Public Works Officer at the Naval Supply Center, Pearl Harbor.

From July 1958 to September 1961 he was Program Manager on the Staff of the Director of the Bureau of Yards and Docks, Navy Department, after which he served as Deputy District Public Works Officer and Deputy District Civil Engineer in the Fourteenth Naval District, with headquarters in Pearl Harbor, Hawaii.  In May 1963 he reported as Chief of Staff to Commander Naval Construction Battalions, Pacific and in February 1964 again returned to the Bureau of Yards and Docks, where he was Assistant Chief of the Bureau for Military Readiness.  He remained there until October 1965, then became Director of the Chesapeake Division, Bureau of Yards and Docks, Washington, DC.  In May 1966 his title was changed to Commanding Officer of the Chesapeake Division, Naval Facilities Engineering Command, Washington, DC.

In August he assumed command of the THIRD Naval Construction Brigade, with headquarters in Danang, Vietnam and “for exceptionally meritorious conduct…from September 1, 1967 to March 5, 1969…in connection with operations against enemy aggressor forces in the Republic of Vietnam…” he was awarded the Distinguished Service Medal.  The citation continues in part: “…As a result of his brilliant leadership, professional skill, and able administration of the United States Naval Construction Forces in the Republic of Vietnam, combat units were able to effectively carry out their assigned missions designed to aid the Republic of Vietnam in its fight against communist aggression…”  He is also entitled to the Ribbon for and facsimiles of the Meritorious Unit Commendation and the Navy Unit Commendation awarded the THIRD Naval Construction Brigade.