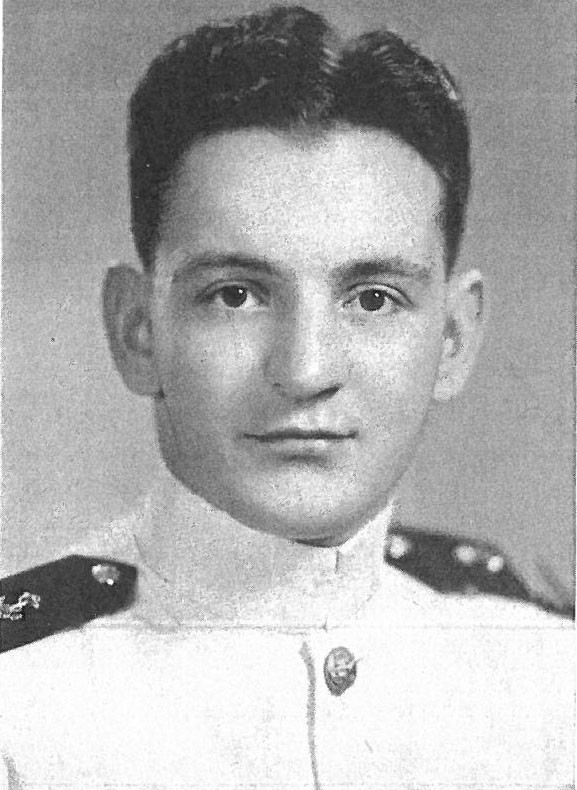 Herbert Henry Anderson was born in Campbell, New York, on 21 November 1918, son of Walter and Grace M. (Axtell) Anderson. He attended Savona (New York) High School and Bucknell University, Lewisburg, Pennsylvania (1936-1937), prior to entering the US Naval Academy, Annapolis, Maryland, on appointment from his native state in 1937.  Graduated and commissioned Ensign on 7 February 1941 (course of instruction reduced to three years and eight months due to the National Emergency), he subsequently advanced in rank to that of Rear Admiral, to date from 1 July l967.

Following graduation from the Naval Academy in 1941, he joined USS Lexington (CV-2) and was on board that aircraft carrier when the United States entered World War II. During the Battle of the Coral Sea (May 4-8), the Lexington was damaged to such an extent by torpedo hits from Japanese aircraft, that USS Phelps was ordered to sink her. Ordered to USS Davison (DD-618), he had duty as Gunnery Officer and Executive Officer on board that destroyer until October 1944, after which he served as Executive Officer of USS Robert K. Huntington (DD-781). In January 1946 he assumed command of USS George E. Davis (DE-357), and from June 1946 until July 1947 was Commanding Officer of USS George (DD-697).

In August 1947 he reported as an Instructor in Engineering and Navigation at the Naval Reserve Officers Training Corps Units, Columbia University, New York City, where he remained until June 1949. He next served as Flag Secretary to Commander SIXTH Fleet and in December l949 became Flag Lieutenant and Personal Aide to the Chief of Naval Operations, Navy Department, Washington, DC. From September 1951 until June 1953 he attended the Graduate School of Business Administration, Harvard University, Boston, Massachusetts, from which he received the degree of Master of Business Administration.

During the period August 1953 to April 1955 he commanded USS Zellars (DD-777), after which he served until July 1957 as Lieutenant Assignment Officer in the Bureau of Naval Personnel, Navy Department. Following instruction at the National War College, Washington, DC, he reported in August 1958 as Executive Officer of USS ST. Paul  [CA-73) and in August 1959 was detached for duty as Assistant Director, later Director, of the Navy Management School at the Naval Postgraduate School, Monterey, California.

In November 1962 he reported as Prospective Commanding Officer of USS Halsey, building at the San Francisco (California) Naval Shipyard, and assumed command of that frigate upon her commissioning, 20 July 1963. In October 1964 he became Commander Destroyer Squadron SEVENTEEN and for outstanding service in that capacity was awarded the Navy Commendation Medal. The citation follows in part:

"...As Commander of a special patrol team of destroyers and supporting aircraft, formed for the purpose of possible employment in the Tonkin Gulf, Captain Anderson planned, organized and carried out a comprehensive training program which resulted in the development of highly advanced techniques for use by combined sea and air forces to detect, identify and, if necessary, destroy small, high-speed, surface craft..."

In March 1967 he became Assistant Chief of the Bureau of Naval Personnel and "for exceptionally meritorious service from March 1967 to April 1969..." in that capacity was awarded the Legion of Merit. The citation continues in part:

"...Rear Admiral Anderson's professionalism, originality, and perseverance have resulted in significant contributions to the Navy's education and training efforts in such innovations as programmed instruction, computer-assisted instruction; expansion of television instruction; the establishment of major training activities at Orlando, Florida, and San Diego, California; and a comprehensive far-reaching revision of the Naval Science curricula provided by the Naval Reserve Officers Training Corps program in civilian universities..."

In Apri1 1969 he reported as Commander Cruiser-Destroyer Flotilla ELEVEN and "for exceptionally meritorious service...as Commander Cruiser Destroyer Flotilla ELEVEN and Commander Task Group 70.8..." he was awarded a Gold Star in lieu of the Second Legion of Merit. The citation further states in part: "Responsible for the planning and prosecution of surface warfare in the Western Pacific, Rear Admiral Anderson exerted great personal effort toward maintaining the highest level of combat readiness and effectiveness, while faced with reduced force levels and increased commitments..."

In March 1970 he became Commander South Atlantic Force and as such participated in Unitas XI, a combined naval training operation involving the United States and the Major maritime nations of South America. The United States task group, under his command, circled the South American continent, steaming 25,000 miles in one hundred and twenty-two days and visited twenty ports in six countries. In that assignment, he also served as Commander Task Force EIGHTY-SlX. He was awarded a Gold Star in lieu of the Third Legion of Merit and cited, in part, as follows: "...Displaying outstanding leadership, planning and managerial abilities, (he) effectively exercised operational control over assigned ships and units, provided superior logistic support to forces operating within his area of responsibility and coordinated with other unified commanders in the area intelligence matters of vital interest to the US Atlantic Fleet..."

In April 1971 he reported as Director of Policy Plans and National Security Council Affairs, Office of the Assistant Secretary of Defense (International Security Affairs), Washington, DC. "For exceptionally meritorious service...from April 1971 to April 1973..." he was awarded the Distinguished Service Medal. The citation continues in part: "Playing a significant role in the development of most of the major policies formulated within ISA during this period, Rear Admiral Anderson served as a principal advisor in matters relating to politico-military studies, policy coordination, evaluation of long-term US security objectives and concepts for regional defense in the international security area..." In May 1973 he was assigned to the Office of the Chief of Naval Operations, Navy Department, where he remained until relieved of active duty pending his retirement, effective 1 June, that year.

He is a member of the Academy of Management.